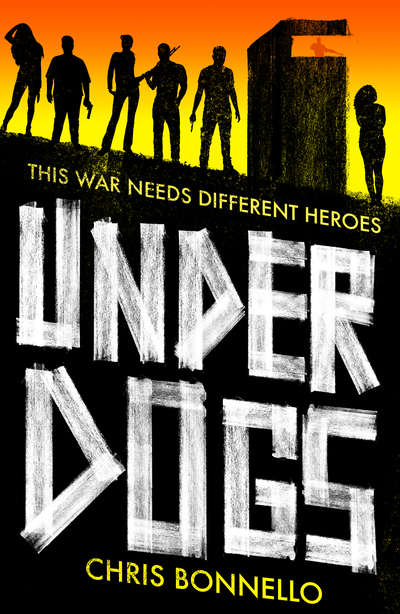 Ewan West has grown up being seen as nothing more than a defiant teenage screw-up, with learning difficulties and enormous personal issues. Thankfully, he’s smart as hell in the battlefield. And now that the British population depends on him, his life might finally mean something.

Britain has been conquered, its population imprisoned in giant walled citadels. They are guarded by an innumerable army of cloned soldiers, created by the biologists and military personnel who have seized power. The nation’s last hope are the Underdogs: a dozen fighters comprised largely of Ewan’s special school classmates, hidden in the abandoned countryside near the prison city of New London.

Ewan and his friends have much to fight against – inside and out – in order to free the British people. But their war is as complex as the characters who fight it. After all, how do you defeat a factory-grown army that outnumbers you by at least a million? The answer may lie in an impossible woman rescued by the Underdogs, who claims to know the secret to destroying New London’s clone factory.

Underdogs, suitable for teens and adults alike, is a character-driven story above all else. Its main characters have spent their formative years being made to believe they’re at the bottom of the social food chain, and now find themselves trying to rescue the population that put them there. As they develop throughout the story, the teenagers are trapped in a constant conflict between learning how to play to their strengths, and coping with the demand on their mental states as the war takes turns for the worse.

In an era when fictional representations of neurodiversity and disability are on the rise, Underdogs goes beyond mere tokenism and introduces a whole cast of teenagers who think differently, balancing their inbuilt advantages with their personal challenges. The novel blends increasingly relevant social issues with intense action, and the result is more than a typical underdog tale. It is a war story about vulnerable young people trying to be the best they can be, in a world that has never been on their side.