Trans Britain: Our Long Journey from the Shadows

By Edited by Christine Burns 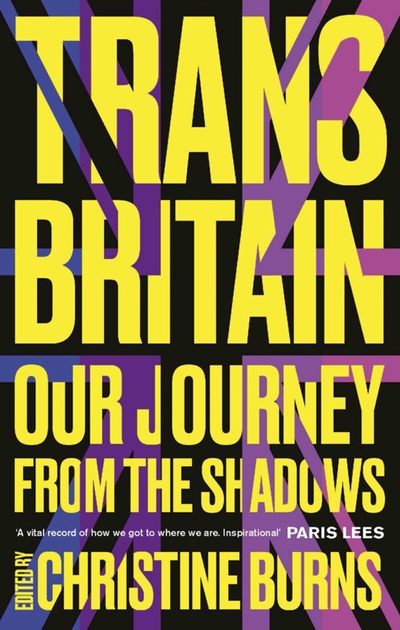 Trans Britain: Our Long Journey from the Shadows

By Edited by Christine Burns

A comprehensive account of the landmark events which shaped the transgender community over the last five decades, told through a series of essays by real experts who were there and can describe the knock-on effects today

'A comprehensive account of the milestone events which shaped the transgender community over the last five decades...'

That is what’s called an 'elevator pitch'. It describes in a nutshell what this unique book is about. But is that enough to tell you why this is a book you not only want to support, but give to all your friends?

Well, here’s the thing… Unless you are close to a transgender person then it’s quite understandable if you mistakenly imagine that all this 'trans' stuff is a recent fad. Suddenly, during the last few years, transgender people seemed to go from obscurity to ubiquity. They were on the television — trans people playing trans characters — in shows like Orange is the New Black, Eastenders, and Hollyoaks. They were on the catwalks in Paris and Milan as every designer’s must-have models. There were transgender candidates in the General Election. Transgender pundits on Question Time. In a real way, transgender was suddenly part of the zeitgeist.

But, this seemingly overnight occurrence was a long time in coming. It’s just that the way it happened was largely 'under the radar'.

Some academic historians and anthropologists will point out that transgender people have been around in all human societies since the dawn of history. They weren’t called that, and history hasn’t labelled them that way until very recently. But they were there. If Joan of Arc were alive today you might be asking what pronouns they preferred.

Yet, even in the swinging Sixties, the liberated Seventies and the shoulder padded Eighties, you would have been hard pressed to find very much about transgender people in the mainstream media. Clearly something happened between then and now. This book will be uncovering that through the words of the best experts: the people who were there as milestone events moulded an invisible community into the one with such powerful advocates today. Nobody is better placed to tell the story than this book’s hand-picked contributors. They include the transgender founders of early support and activist groups in the UK, an actress, a priest (OK, not a bishop), parents, teachers, academics, lobbyists, journalists, film makers, broadcasters PLUS long time allies from politics, unions and medicine. They’ve been carefully chosen to make this both an authoritative and rounded account.

This will be a book that’s not just for transgender people or their friends and supporters. It’s the book those people will recommend to others to play catch up on where we’ve been, and why things have come about in the way they have. It’s everything you ever wanted to know about where trans people came from, but never knew how to politely ask.