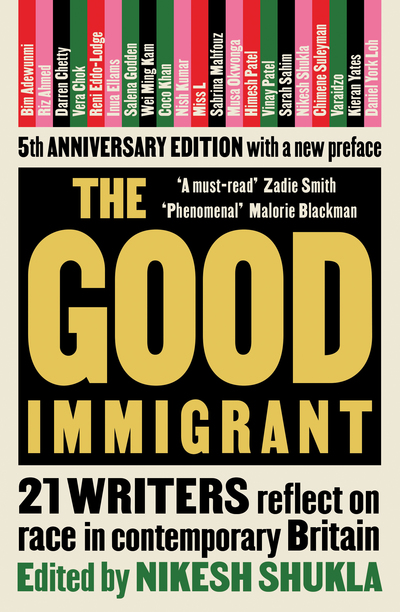 ‘We should recognise the courage that has been shown in producing these essays . . . Helps to open up a much-needed space of unflinching dialogue about race and racism in the UK’ Sandeep Parmar, Guardian

‘If I could, I’d push a copy of this through the letter box of every front door in Britain’ Independent

How does it feel to be constantly regarded as a potential threat, strip-searched at every airport?

Bringing together 21 exciting black, Asian and minority ethnic voices emerging in Britain today, The Good Immigrant explores why immigrants come to the UK, why they stay and what it means to be ‘other’ in a country that doesn’t seem to want you, doesn’t truly accept you – however many generations you’ve been here – but still needs you for its diversity monitoring forms.

Inspired by discussion around why society appears to deem people of colour as bad immigrants – job stealers, benefit scroungers, undeserving refugees – until, by winning Olympic races or baking good cakes, or being conscientious doctors, they cross over and become good immigrants, editor Nikesh Shukla has compiled a collection of essays that are poignant, challenging, angry, humorous, heartbreaking, polemic, weary and – most importantly – real.