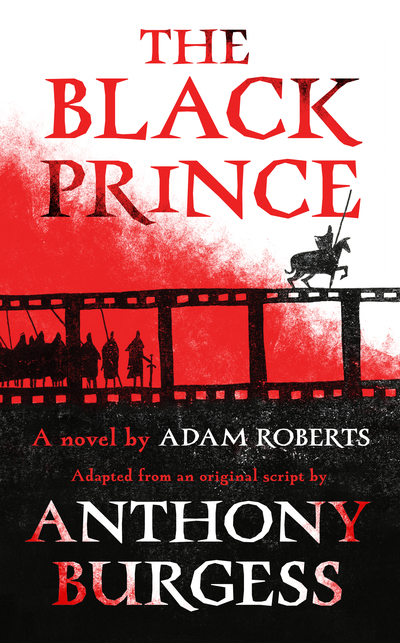 History
You made The Black Prince a reality. It's available in all good book stores now.
$8
84 pledges

Signed, personally dedicated and lined by Adam 1st edition hardback, ebook edition and your name in the back of the book
$60  + shipping
22 pledges

A Guided Tour Round Burgess' Novels

Ebook of Adam's collected, extensive critical essays on each of Anthony Burgess' 33 novels and everything to Signed level.
$60  + shipping
4 pledges

Pictures from an Exhibition

A copy of the photographic exhibition catalogue 'Manchester Made Me', featuring rare images of Burgess and Manchester, plus everything to signed level
Only 20 available
$105  + shipping
1 pledge

Two CDs of music composed by Anthony Burgess, Ebook of the collected critical essays and everything to signed level. (1 available)
$105  + shipping
5 pledges

Limited (one of only 250) edition letterpress prints of an unpublished poem 'Essay on Censorship' by Anthony Burgess. Plus everything to signed level Only 5 available
$120  + shipping
10 pledges

A scarce HB copy of an Anthony Burgess novel from Burgess' own personal collection. With a bookplate and letter of provenance from the Burgess Foundation. Plus everything to Collectible level
Only 10 available
Available titles (2 copies of each):
ON MOZART
THE DEVIL'S MODE
FLAME INTO BEING
CYRANO DE BERGERAC
MAN OF NAZARETH
THE KINGDOM OF THE WICKED
ENDERBY'S DARK LADY
NAPOLEON SYMPHONY
$150  + shipping
1 pledge

Facsimile typescript pages from the screenplay THE BLACK PRINCE by Anthony Burgess. Burgess' own three-page synopsis and the first page of the screenplay typescript itself, which has Burgess’s signature on it. Presented in a collector's presentation folder. An Ebook of Adam's 33 collected critical essays on Burgess's canon. Plus everything to signed level
Only 10 available
$375  + shipping
1 pledge

Appear as a Character in an Adam Roberts Novel

Tell Adam a little about yourself (what you look like, a couple of things about your character) and he'll write you into his next novel as a minor character. Or if you prefer just give him your name. Plus everything to signed level.
(Two available)

I grew up reading Anthony Burgess, and have been a long-term fan: I consider him one of the few actual geniuses of the twentieth-century novel. So when I chanced upon the following exchange, from a 1972 interview Burgess gave to the Paris Review, I was intrigued:

Do you expect to write any more historical novels?

I’m working on a novel intended to express the feel of England in Edward III’s time, using Dos Passos’ devices. I believe there’s great scope in the historical novel . . . The fourteenth century of my novel will be mainly evoked in terms of smell and visceral feelings, and it will carry an undertone of general disgust rather than hey-nonny nostalgia.

Which of Dos Passos’ techniques will you use?

The novel I have in mind, and for which I’ve done a ninety-page plan, is about the Black Prince. I thought it might be amusing blatantly to steal the Camera Eye and the Newsreel devices from Dos Passos just to see how they might work, especially with the Black Death and Crécy and the Spanish campaign. The effect might be of the fourteenth century going on in another galaxy where language and literature had somehow got themselves into the twentieth century. The technique might make the historical characters look remote and rather comic—which is what I want.

The idea of an unfinished Anthony Burgess novel, based on such a fascinating premise, took hold of me. I talked about it with Andrew Biswell (director of the Burgess Foundation in Manchester the world’s leading expert on Burgess’s writing) and we agreed it would be worth seeing if the work could be completed. I have always felt that a science fiction writer is working in the same sort of territory as the writer of historical fiction (and several of my SF novels have been historical, or included historical elements): the creation of a world, the estrangement of the familiar. Dos Passos is a giant of experimental Modernist writing, and his techniques were adopted by John Brunner in his SF masterpiece Stand of Zanzibar; but nobody has applied them to a medieval topic. It was a challenge I couldn’t resist.

The Foundation sent me copies of the relevant material from their Burgess archives, most usefully a complete screenplay Burgess wrote in the mid-1970s called ‘The Black Prince’, drawing all his notes and ideas together. The film was never made, but the screenplay gave me a sense of how to bring the whole thing together.

I sat down to re-read the entire run of Burgess’s novels, to get myself into a proper Burgess frame of mind, and to saturate myself with a sense of his style—actually a variety of different styles. Above all I wanted there to be no visible ‘seam’ where Burgess’s stuff ended and mine began. At the same time I read as widely as I could on the history of fourteenth-century Europe. It is important to the novel that, though the form and style are vigorously modern, the subject matter itself should be scrupulously accurate and historical—it helped that I work for the University of London, and that several of my medievalist colleagues allowed me to pick their brains.

The novel came together over a period of about a year. The biggest technical challenge was in keeping Burgess’s own voice alive throughout, and in those sections which were just me I worked hard to produce something of which, were he alive, he would not be ashamed. Speaking for myself I’m immensely proud of the novel that has resulted. It is both an original historical novel unlike any other, and also an addition to the canon of Burgess’s own novels.

I’m especially delighted that we’ve been able to bring this project to the world in 2017, the centenary of Burgess’s birth. Were he here I suspect he might eye me warily, puff on one of his cigars, and perhaps have some whisky; but I’d like to think he’d be secretly pleased.