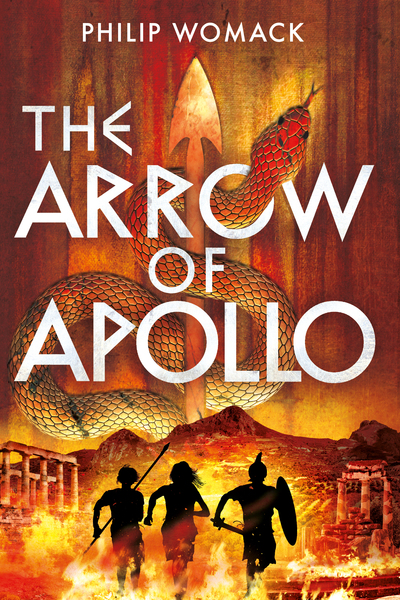 The gods are leaving the earth, tempted by other worlds where they can live in peace. Only a few retain an interest in the mortals left behind, including Hermes, the messenger god, and Apollo, Lord of Light. Other, darker, more ancient forces are wakening, and threatening to take over.

In The Arrow of Apollo three teenagers encounter increasingly perilous situations in order to defeat Python, the most terrible enemy of all. It draws freely on Greek and Roman myth, whilst telling stories that have not been told before in a gripping, fast-flowing tale for boys and girls aged eleven plus, combining literary quality with an absorbing plot.

In The Arrow of Apollo, two opposing houses are forced to come together to face a terrible danger. Silvius, son of Aeneas, of the Italian House of the Wolf, is given a task by a dying centaur. The dark god Python is rising and massing an army of unstoppable force. The only thing that can save the world is the Arrow of Apollo - but it was split into two.

Against his father’s wishes, Silvius and his friend Elissa must travel to the land of their enemies, the Achaeans.

Meanwhile, Tisamenos, the son of Orestes, is facing his own dangers in the kinghouse of Mykenai. A plot is afoot against both him and his father, and he is the only one who can stop it.

When Silvius, Elissa and Tisamenos meet, they enter a final, terrifying race to reunite Arrowhead and Shaft, and destroy the army of the Python.

There’s one more problem: a prophecy tells that one of them will die.