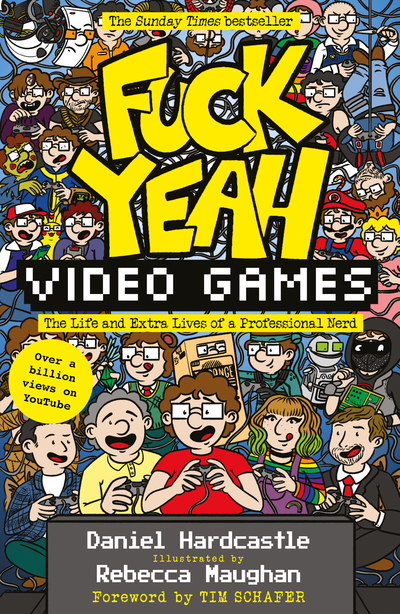 Biography | Gaming
You made FUCK YEAH, VIDEO GAMES: THE LIFE AND EXTRA LIVES OF A PROFESSIONAL NERD a reality. It's available in all good book stores now.
FEATURED REWARD
$20  + shipping
42 pledges 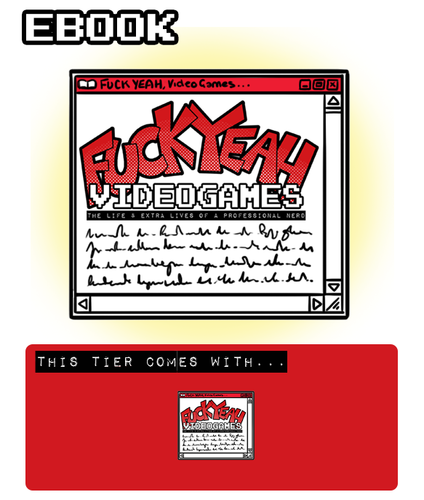 The unabridged audiobook version, unprofessionally recorded by me in my own office. If time is tight I might record a bit while cooking dinner, hoovering, that sort of thing. 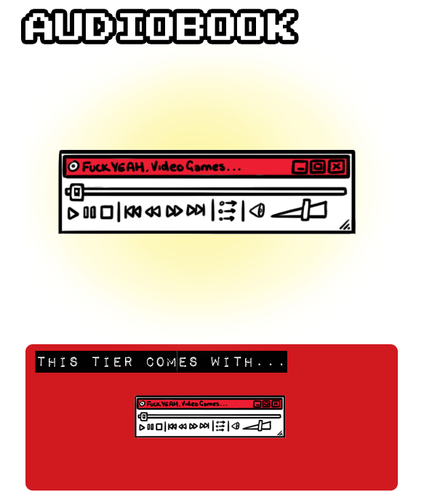 Oooo, look at Captain 21st Century over here! This’ll get you an Ebook and the Audiobook but you’ll have to provide the robot butler yourself. 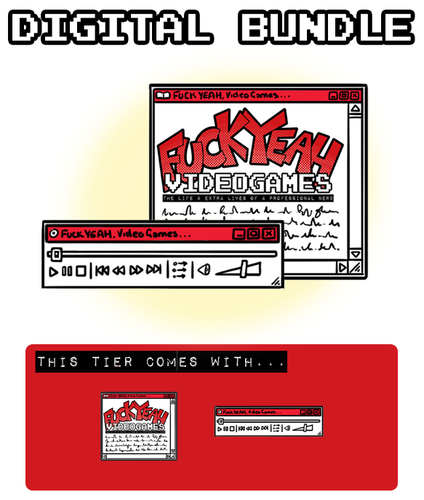 As above but I shall take your copy gently into my hands and royally fuck up my new I’m-an-author-now signature on a page near the front. Rebecca will sign it too! Hers will be nicer! 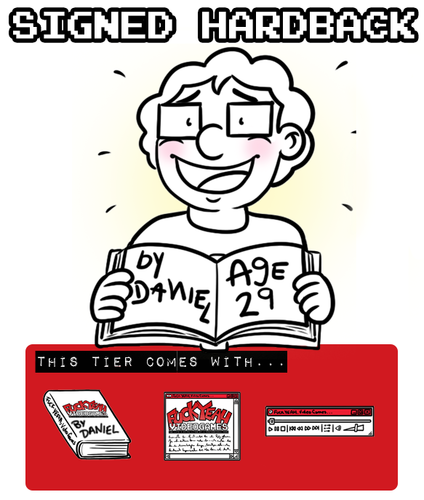 Two copies of the hardback book so you can force a friend to sit outside under a tree and read with you. The digital bundle too for headphone sharing time! Friendship! 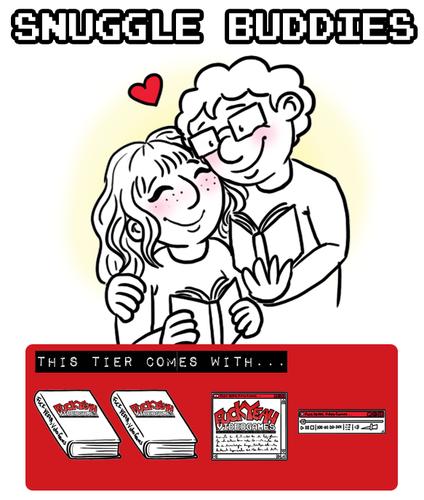 A bookmark featuring illustrations from the book that will be signed by my two german shepherds! Well, when I say signed, we’re just going to put pet safe ink on their paws and hope you’re all alright with a dog-generated smear on a bookmark. Pray for my floor. Comes with a signed hardback book and the digital bundle too!
(My vague attempts to make this happen may be recorded and uploaded to the internet.) 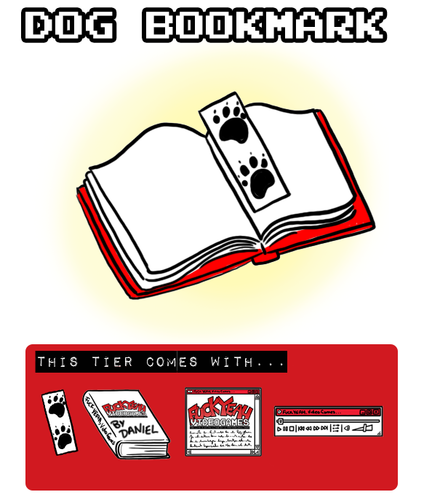 Art! A collection of art prints taken from the pages of the book. Glue them to a wall, frame them or make a pair of underpants from them. The choice is yours! Oh, and a signed hardback book and the digital bundle too, duh. 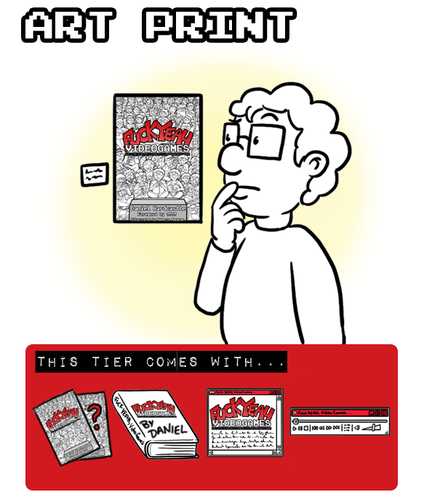 Everyone likes badges* so here is a set of them featuring characters from the book! I’ll throw in a signed hardback and the digital bundle too I guess!
*According to market research. **
** A Tweet I made 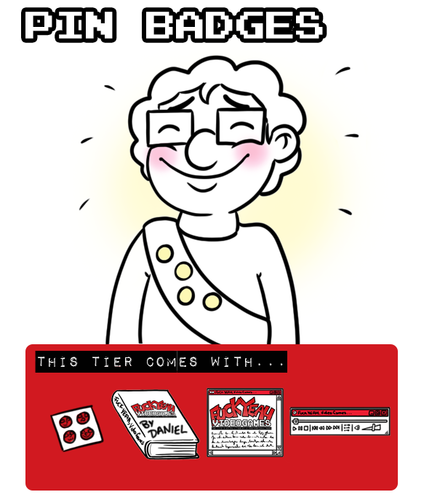 That’s right. It’s finally here. The fabled Tortilla lasagna recipe, on a poster, with cute drawings of the ingredients being murdered horribly. Enjoy your signed copy, ebook or audiobook underneath it to really make people leave you alone. 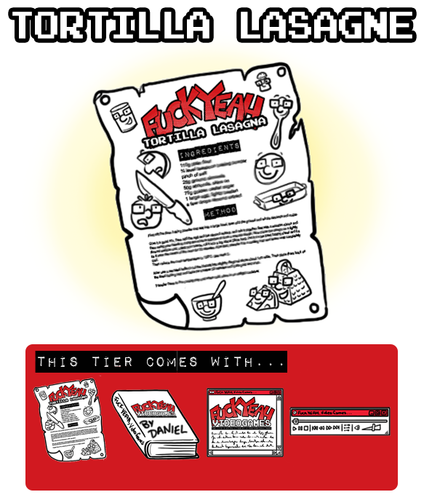 A personalised, signed copy of the book. I will take time away from my busy life to actually make my hand move in a way that represents your name as well as many words of wisdom/stupidity. Rebecca will draw something in there too! Aren’t you lucky! Digital bundle too! 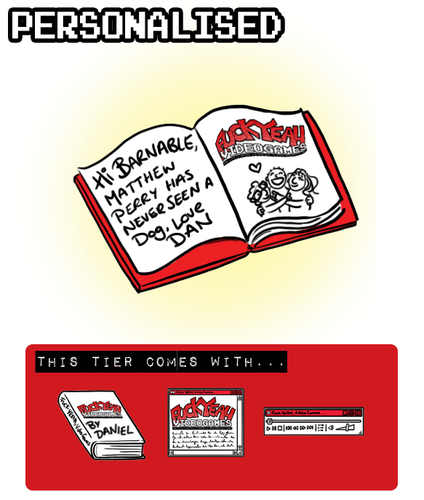 Look at me, I’m doing a Ubisoft! This is everything up to this point. The ebook, audiobook, a signed hardback, dog bookmark, art prints, pin badges and the Tortilla lasagna recipe poster. Also a certificate of authenticity so cheap looking that you’ll think it was knocked up in about 30 minutes. (It was) (Best Value) 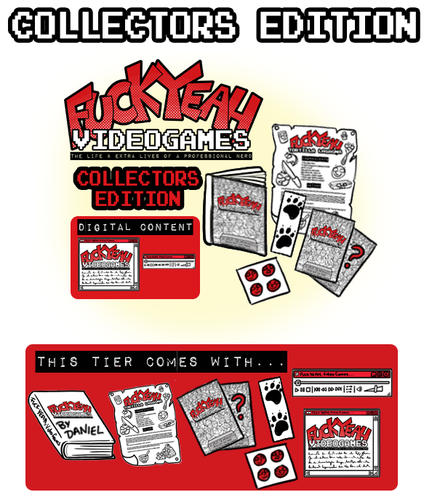 Send a few pictures of your lovely face in and Rebecca will traditionally hand draw you and me playing games in the art style of the book. We’ll even sign it you lucky devil you!
Oh, and a signed book, digital bundle too! You know the drill by now.

● Unique A5 Artwork of your face in the books art style.
● Signed Hardback
● Ebook
● Audiobook 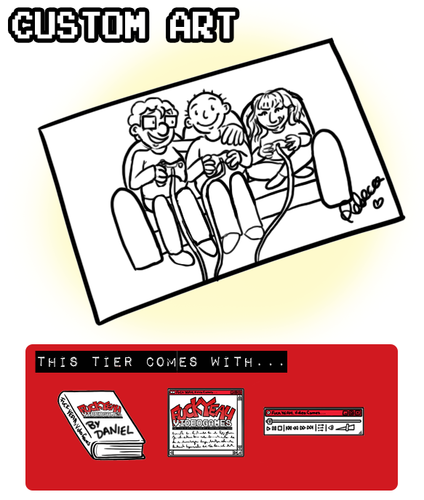 A personalised video thank you from me to you. May feature dogs. Or lego. Maybe both. Minimum of 60 seconds (It might last an hour. You know how I go on). We’ll contact you after the campaign to find out a bit about you and I will totally use that information to get weird.
Signed book and digital bundle too! 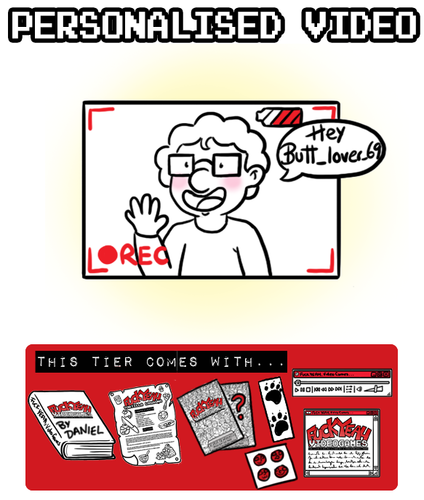 Front of the Book Edition (Only 20 Available)

Group photo! Send in your face, Rebecca will draw it in the art style of the book and that picture will be printed alongside your name on one of the first few pages of the book! Let everyone gaze upon the cartoonified beauty that is your mush!
Fancy a signed book and digital bundle too? Good. 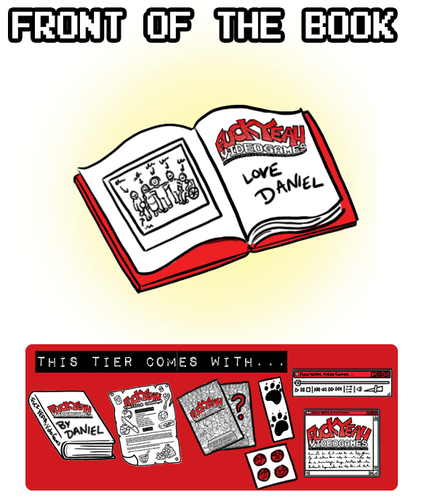 Front of the book? Pfft, you want to be FRONTER. Your portrait, in the art style of the book, will be immortalized on the inner cover forever and ever. When you send in your pictures, be sure to be as fancy as possible. You’re the first person everyone will see!
Signed book and digital bundle too, duh.

So there’s that one game I’ve never played that you DESPERATELY want me to isn’t there? Well, this is that chance. This lets you select a game that I’ll play for an edited video. You’ll get a shoutout in the video and, if the game is terrible, you will be blamed and abused all the way through it.
You know what’s next. Signed hardback and the digital bundle of course.
(Note: I won’t be able to cover anything on Twitch’s banlist or any Nintendo stuff. This will stop rival YouTuber’s using this tier to destroy my career. SHUT UP IT MIGHT HAPPEN.) 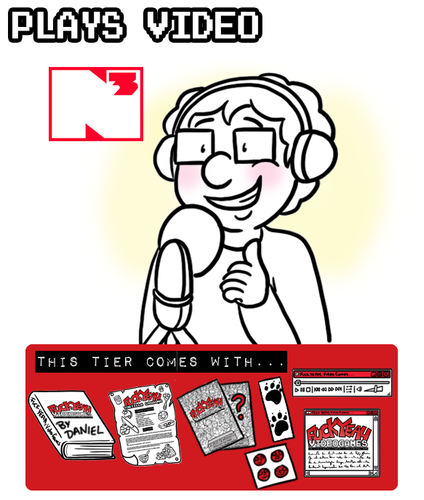 You Choose A Chapter Edition (Only 1 Available)

The big one. You pick a game and I’ll write a chapter on it. You’ll get a shoutout in the chapter and a thousand or so words on the game of your choice. Think my book needs some Sonic ‘06? Now is your chance!
(Note: My book doesn’t need any Sonic ‘06 thank you very much.)
Do I need to say it? A signed hardback and a digital bundle too. I guess I did.

● Choose the game that I will cover for a full chapter of my book.
● Signed Hardback
● Ebook
● Audiobook

When will you be posting supporter copies?

We're aiming to send out finished copies to subscribers in late September 2019.

The hardback is sold out on the Unbound website, where can I buy the book?

You can pre-order the book from most good bookshops. We recommend using Hive.co.uk as this helps you support your local bookshop.

As I rapidly career towards 30 like the Hovis advert kid after someone had cut his brakes, I’ve decided to look back on what really made me happy in life. The friends, the romances, the experiences. All of these pale in comparison to video games.

When I was growing up all we had for entertainment was a dirty rock, a finished book of crosswords and an 11 second long VHS called The Best of Eastenders. The only social network was the back of a public bathroom door and pornography had to be sourced from the foliage just outside of school. These were dark times.

However, somethingsomething years ago we invented video games! Now instead of passing the time by spinning around in circles until you died, we could plug a box into the TV and shoot monsters in the face! The boxes got bigger, the monsters got shinier and now we’ve all got boxes in our house with more teraflops than people who actually know what a teraflop is!

Sadly, this wasn’t to last. As video games received more popularity, they attracted the worst kind of people imaginable. Businessmen. These bastards invented things like free-to-pay, loot boxes and microtransactions, tainting the once noble hobby of shooting fake monsters in the face. Video games looked to be doomed.

If only somebody, and I’m just taking a wild stab here, would write a book celebrating the brilliance of video games in a warm and whimsical manner. If only that book was filled with jokes, largely on topic anecdotes and more swear words than that YouTube video with the bootleg fireworks. Maybe that could save us all.

HANG ON A SECOND. I’ve totally, accidentally just described the book I’ve been writing for the past year! What are the chances of that?!

Fuck Yeah, Video Games is a love letter to the greatest hobby of them all (that doesn’t primarily involve trains). Each chapter looks at a different game from the last 30 odd years and crams as many jokes, obscure references and personal stories into it as will fit. From God of War to Animal Crossing, SSX 3 to Noby Noby Boy it’s almost as if I’ve chosen the games to feature totally at random. (I pretty much did.)

Alongside this march of merriment are a handful of chapters dedicated to the hardware behind the games. Here we celebrate the weird and wonderful world of consoles and peripherals. To be honest, it’s an excuse to write about really obscure Sega peripherals and so I could get Stuart Ashen of Attack of the Flickering Skeletons fame to write a chapter about Atari.

Also, sandwiching all of this together will be gorgeous, chunky illustrations by Rebecca featuring a cartoon me and many, many outfits. Rebecca’s nailed the look, even if I’ve been drawn much fatter than I hope I am.

Anyway, I’ve teamed up with Unbound to get this book made and into your eventually arthritic hands. They’re a neat company and they let me put a swear word in the title so I’m proud to be working with them.

(Unless you want to read the excerpt first. In that case, read more, then stop, then buy things. Thank you.)

IMPORTANT NOTICE: The deadline to pledge and get your chosen name inside the book is midnight (BST) on Sunday 14th October 2018. Any pre-orders after this date will be sent copies of the book but won't have the name included. Please see this help article for details on how to check or change the name. Now we just need to figure out how we're going to display 8000+ names inside...