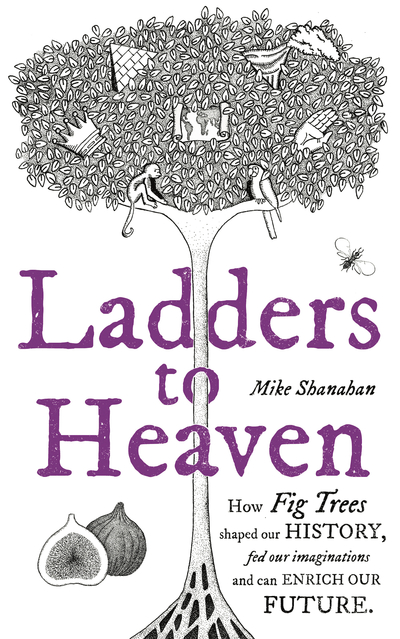 Nature
You made Ladders To Heaven a reality. It's available in all good book stores now.
$8
101 pledges

Currently sold out. In the meantime, you can order a hardback edition here.
$75  + shipping
28 pledges

Only one available. Pledger receives the 20 original illustrations, 2 tickets to launch party, personally signed and dedicated 1st edition hardback, plus the ebook edition, plus set of 20 limited edition postcards that show the book's illustrations.

Ladders to Heaven tells the story of an amazing group of plants that have affected humanity in profound but little-known ways – by shaping our world, nourishing our bodies and feeding our imaginations.

They are the fig trees and the best could be yet to come. These trees could help us restore damaged forests, protect rare wildlife and limit climate change. And all because 80 million years ago they cut a curious deal with some tiny wasps. It was a deal that created biological shackles for them both, but which also created gifts for many other species, including our own.

It’s thanks to this deal that figs sustain more species of birds and mammals than any other fruit. It’s also why fig trees have so often influenced human history and culture.

They have symbolic significance in every major religion, featuring in the stories of Adam and Eve, Krishna and Buddha, Jesus and Mohammed. But their longevity puts our short history into humbling perspective.

The fig trees survived the mass extinction that saw off the dinosaurs and have been one of nature’s driving forces ever since. They were feeding our ancestors long before they descended from the trees.

Today, the 700+ species of figs are the most varied group of plants in the world. But they are under threat. And time is running out for us to learn what their story can teach us. It's a story of hope in a time of falling trees and rising temperatures.

Ladders to Heaven will take you to rainforests, volcanoes and ancient temples. It will tell tales of kings and queens, and gods and prophets – of flying foxes and botanical monkeys, scientific wonders and religious miracles. It will show how we can harness the biological power of fig trees to enhance our environmental security.

The story can tell us much about our origins… and a lot about where humanity could go from here. It stretches back tens of millions of years but is as relevant to our future as to our past. It even involves robots.

"It's lovely. A real labour of love, concisely and elegantly told” – Fred Pearce, author and the New Scientist's environment consultant

You can now purchase a copy of the new paperback fromAmazon here.

Currently sold out. In the meantime, you can order a hardback edition here.
View all 5 rewards