Heart of the Original

Originality is hated and pretended, but the real thing is beautiful 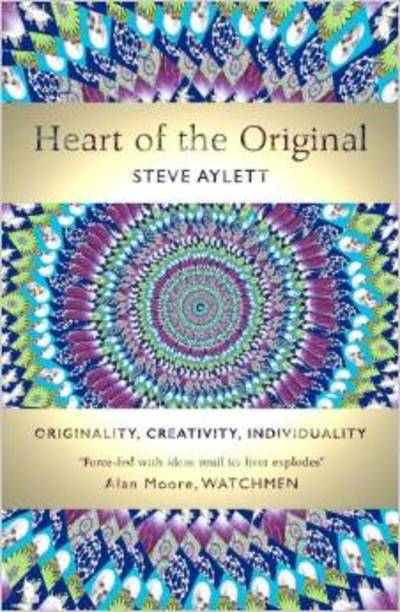 Non fiction
You made Heart of the Original a reality. It's available in all good book stores now.
$8
120 pledges

A goodie bag specially created by Steve Aylett, including signed Caterer comic and Tao te Jinx, 6 pages of handwritten notes for Heart of the Original and more, plus 1st edition hardback.

Only 5 available for early birds - SOLD OUT!

A goodie bag specially created by Steve Aylett, including signed Caterer comic and Tao te Jinx, 6 pages of handwritten notes for Heart of the Original, an original comic sketchwork and more, plus 1st edition hardback.

2 invites to the launch party, 1st edition signed hardback and the digital edition.

Praise for Heart of the Original from Alan Moore, creator of the V for Vendetta, Watchmen and Promethea comics:

"Force-fed with ideas until its liver explodes, this staggeringly brilliant book has scarcely a line in it that won’t make you wish you’d thought of it first. Raising the bar to the point where it’s a hazard to migrating birds, this is a sizzling and hilarious manifesto where its author means every blazing word, and which makes a case for the caged-animal repetitive behaviour of our culture that cannot be argued against by anyone with an honest bone in their head. Written in his own brains, Heart of the Original should be tattooed on the backs of all the limp re-imaginers currently crowding our TV screens, our multiplexes and our surviving bookshops. Probably the most astonishing thing that you will read during this otherwise lacklustre incarnation."

'Nothing new under the sun' is an order, not an observation - and one driven by a strange unspoken fear of genuine originality. Heart of the Original is about the professed desire for originality and the actual revulsion toward it, why the same idea is repeatedly hailed as a breakthrough, how to locate original ideas by thinking spatially, why almost any situation is improved by a berserking hen, why obvious outcomes are declared unexpected or 'unthinkable', why history is allowed to repeat, and whether humanity wants to survive - true originality increases a planet’s options. As well as a secret history of where and when certain ideas appeared first, it’s a creativity manual and a rich piece of satire.

Those who burst out thinking in public encounter not only sarcasm and physical aggression but a total lack of legal recourse. I explain how to 'pass' among the mentally dead while remaining alive. This zombie camouflage involves more than merely looking happy.

Real creativity is a ferocity of consciousness. It can be as small as the firestarter spark produced by two words that have never been next to each other before or as stomach-rolling as translating yourself sideways into adjacent dimensions, a nearly-simple rotation of the soul which leaves you radiant with scorn and the precocious levels of seemingly casual opting-out only previously achievable on a framework of pumped, high-tensile resentment. You may even live a life with repercussions. When excluded from human society, don’t stop to get it in writing. You are free.

'Originality irritates so obscurely you may have to evolve to scratch it.' - Jeff Lint