By Simon Evans and Phin Glynn 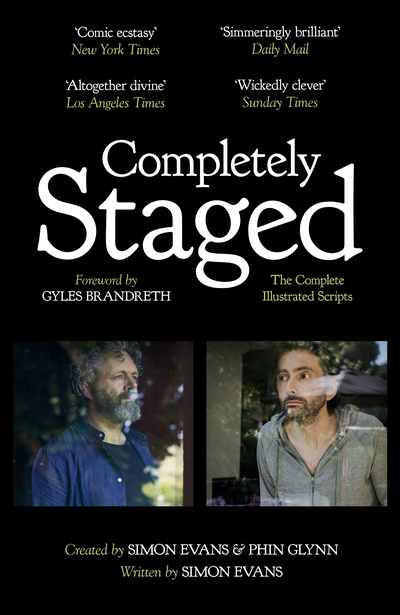 By Simon Evans and Phin Glynn

'Every episode bristles with comic lines and winning believability' Spectator

'The surprise comedy hit of the summer' Observer

Starring David Tennant and Michael Sheen, along with A-list guests, the award-winning and critically acclaimed British television comedy series Staged was an instant hit. Launched during the global coronavirus pandemic, the show follows the two thespians playing fictionalised versions of themselves as they try to rehearse a play during lockdown... over Zoom.

Completely Staged presents the complete text of the BBC screenplays from Staged’s writer and director Simon Evans and co-creator Phin Glynn, illustrated throughout in full colour with stills from the show, original drawings, sheet music for the theme tune, Georgia Tennant's carrot cake recipe, tips on how to draw a pineapple and much more.

This treasure trove is a must-have for every fan of Staged, a show which perfectly combines comedy and poignancy to encapsulate the collective feelings of a reluctantly virtual world.