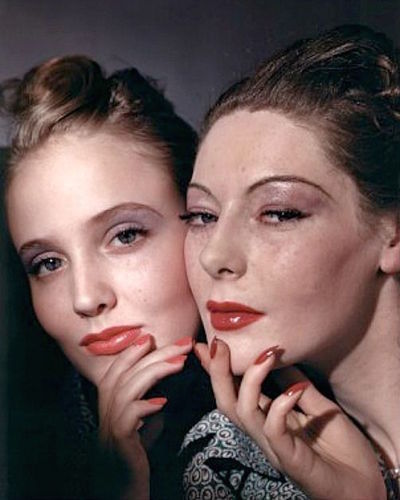 To borrow an expression that wouldn't become common currency till decades later, Muriel Maxwell had it all; beauty, brains, connections, and a glamorous life both in front of and behind the camera. She achieved remarkable success across much of her career — but if she’s remembered at all, it’s as one of the first of modelling’s cautionary tales.

Rabbi Benjamin Tintner — the first Jewish chaplain to serve at West Point — expected a lot from his two Barnard-educated daughters. But where Adeline would become one of the century’s pre-eminent Henry James experts, Muriel plumped for the adrenaline rush of the fashion industry. She worked for milliners in London and Detroit, before being discovered in 1937 by photographer Toni Frissell. ‘Poor, star-crossed Muriel,' was how Liz Gibbons would remember her, ‘The looker of us all, whose rabbi father forbade her the use of the family name. Modelling was that trashy, he said.’

As Muriel Maxwell, she modelled full-time for barely four years ('Then I thought I'd be sick if I did it once more,' she confessed to the New York Times), before migrating to a successful career as Vogue's sittings editor; most famously, in 1947, she gathered 11 of her old contemporaries back in front of the camera for Penn's Twelve Beauties spread. Later, she joined up with Jane Gray of Harper’s Bazaar to form one of Manhattan's first fashion PR agencies. Clients included Arnold Scaasi, who thought Maxwell had 'more style in her little finger than anyone around.' And for decades, that was her standard narrative; the aloof, exotic Thirties cover girl who became a Manhattan fashion power player.

But at some point in the Seventies, Maxwell disappeared from sight. Grace Mirabella heard she’d become an alcoholic; ‘Muriel Maxwell, my God, was on welfare before she died.' designer Bill Blass confided to Michael Gross. (But the Italian-American Mirabella, an outsider like Maxwell amongst Condé Nast’s impeccably-pedigreed socialites, was sceptical; 'I think it could be legend,’ she reflected, ’the colorful talk of old Vogue editors who still, to this day and in their retirement, have trouble thinking of [Maxwell] as one of them.’)

That sense of otherness is borne out in many of Maxwell’s pictures — most notably in Horst’s 1941 double-shot, where he contrasts her face (the flat planes, the short nose, the freckled cheeks, the waves of bronze hair, the long slanted eyes) with that of serenely blonde all-American Georgia Carroll. ‘I broke all the rules of beauty.’ Maxwell declared in 1961; it seems a shame, fifty years on, that she’s had so little credit for it.

Seems an odd description of contrast here... The two models have exactly the same skin tone (at least as it ended up)... and their hair is not a great contrast either. But what I would like to know, since I am a member of her family, is how you discovered that Benjamin Tintner told her she couldn't use Tintner as her name as a model. Do you have a source for that? And to whom did she declare that she 'broke all the rules of beauty'. These need proper foot-noting. a.f.janowitz@qmul.ac.uk