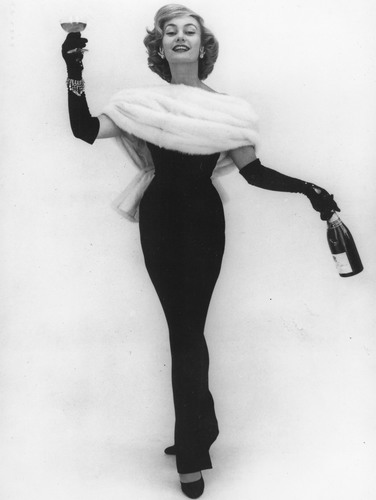 Most of the women whose lives I’ve featured (both here, and — in more condensed form — on Instagram) had neither the profile or the platform to share their perspectives. Jean Dawnay was the exception; a household name with a glittering career, who seized the chance to tell her side of the story.

In what’s perhaps the most famous picture ever taken of her, Jean Dawnay stands triumphantly in the centre of the frame. She looks every inch the star; white mink slung round her Norman Hartnell gown, a champagne bottle swinging from one hand, and a glass raised to toast the photographer in the other.

Dawnay’s victory was all the sweeter given that it had been one earned over several long years of slogging — and give that her success had been deemed unlikely from the outset. “You’re quite nice, dear, but rather ordinary.” one agent told her when she first began to do the rounds. “I’d try something else if I were you.”

If the advice was meant to discourage, it backfired. ‘My fair hair was fuzzy from cheap perms,’ Dawnay conceded, “my eyebrows ragged and ungroomed, my two front teeth were crossed and ‘rabbity’, my cheeks too plump, and my makeup did nothing for me.” But instead of giving up, she persisted — fixing her teeth, restyling her hair, and losing weight. Slowly, as months went by, she began to pick up assignments. And in 1949, with nothing to lose, she struck out for Paris.

She might have hoped for more of the same odd jobs. But instead, she was picked to join the city’s most successful couture house, Christian Dior. ‘I chose ‘Caroline’ (there was already a Jean on the staff),’ the designer explained, ‘for her essential Englishness — she had blue eyes, golden hair, and a slender, graceful figure.’

Dawnay only modelled for Dior for a single season. But it did the trick; when she returned to London, she was anointed a star. (‘Even the local butcher had a picture up me,’ she laughed. ‘stuck up behind the carcasses.’) A steady stream of editorial and advertising success followed, as well as successful international tours to Australia, Italy and New. But Dawnay, practical as ever, was thinking ahead.

“I realised that I must start thinking of giving up modelling before it gave me up.” she reflected. “No glove has ever felt to discarded as a discarded model.” So, on the side, she became a TV regular, on popular shows like ‘Café Continental’ and ‘What’s My Line’ (“People seem astonished to find that models can be human and animated.” she marvelled.). And in the autumn of 1955, she published ‘Model Girl’ — a breezy, but unvarnished, canter through her career.

The book was an instant, resounding success, offering readers a rare insght into the workings of the fashion world. And Dawnay continued to add strings to her bow — appearing on stage in the West End, as a dope addict for San Wanaker’s ‘A Hatful of Rain’ , and on screen as the adventurous society girl who falls for Frankie Vaughan in ‘Wonderful Things!’ Hollywood offers followed, including an opportunity to make ‘Model Girl’ into a film. "But they wanted to add a love interest." she sighed crossly. "Which would just have been silly." Instead, she became an adviser to Marks & Spencer, and in 1963, after years as a walking advertisement for glamorous single life, married Prince George Galitzine.

For the next half-century, the Galitzines lived in an elegant flat on Eaton Square. I spent an afternoon there, in 2014, interviewing the Princess about her life. Her eyesight was failing badly by then, and she was clearly frustrated by its loss. But she was a charming, engaging hostess, regaling me with wine and cake and tales of her eventful life — the peripatetic childhood, spent shuttled from home to home after her mother’s death; the war years spent in a parachute factory, and then as part of the Baker Street coding team; the postwar years spent as a Brigadier’s assistant supervising Germany’s reconstruction. ("There were men everywhere." she twinkled. "But I was Caesar’s daughter, you see. So I was PERFECTLY safe!"); her long, affectionate relationship with Terence Rattigan, who lived across the square from her, and who used her love-life as source material for Separate Tables; her charity work, at home and in Russia; and her adored daughter and grandson.

When I’d finished taking notes, Dawnay asked me whether I’d help her write a follow-up to her biography; her original publishers were interested, and she simply needed someone to dictate to. But by then I’d already committed to Barbara Mullen’s story. So all I could do, to my eternal regret, was suggest I could try to help when my current project was done.

Five years later, ‘The Replacement Girl’ has ballooned into something more complicated that I could ever have imagined. And Dawnay is dead, without having told the rest of her story. It’s a real shame: as with everything else she did in her life, she’d have carried it off magnificently.