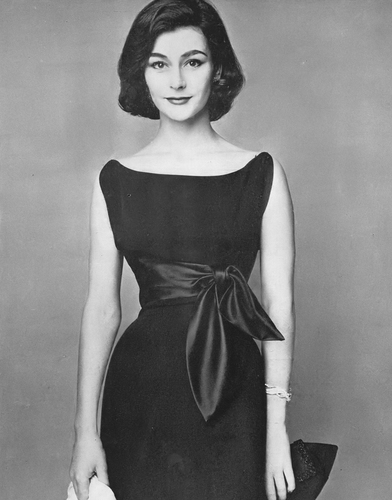 2018 sees research for ‘The Replacement Girl’ shift to Barbara Mullen’s later career, in London and Paris. And so the second group of stories to be told are those of Barbara’s French and British contemporaries — women like Anne Gunning, perhaps the first real British supermodel, who took America by storm a decade before Twiggy and the Shrimp.

‘She has been everything that girls dream about when they dream of becoming top models.’ a journalist wrote in 1961, on the eve of Anne Gunning's marriage — ironically, given that Gunning had never dreamt of being a model herself. As a teenager, whilst still studying at LAMDA, she won the 1949 London Films Cup. for acting talent. Billed in the press as a ‘taller edition of Vivien Leigh’, she was signed up to a ten-year Rank movie contract, and given small parts in romantic comedies like ‘The Gay Lady’, ‘Helter-Skelter’ and Noël Coward’s ‘The Astonished Heart’. Then she landed what should have been her breakout role — as a tragically-widowed young woman in Lance Comfort’s ‘Portrait of Clare’. Gunning looks ravishing in the film (“Certainly she is of a beauty calculated to disturb the even tenor of the thought.” one writer confessed, “and make the heart go pitter-patter of any middle aged gent.”) But there was a gravity about how she moved, and spoke, that always made her seem remote on screen. It would take the fixed glare of fashion photography to bring Gunning unforgettably to life.

In 1948, Henry Clarke first spotted the young actress in a restaurant on the Kings Road. He asked her to pose for him; she accepted, and began to do small assignments here and there on the side, for Clarke, John French and Dick Dormer. And as her film career stalled, she quietly developed into one of London’s top models — a regular fixture in Vogue’s British and French editions, and the star of US Vogue’s 1952 couture shoots. “I was very lucky,” she admitted. “I started bang off, no training, no model schools. And this was really due to meeting Henry and Dick, two very good photographers. I didn’t have to do that awful thing of taking my photographs around, knocking on studio doors for work. I could never have done that.”

That success was all forgotten, however, in 1953, when American photographer Milton Greene ‘discovered’ Gunning — shooting her in amongst castle ruins in a Sybil Connolly gown and cape. It made the cover of LIFE, alongside the headline IRISH INVADE FASHION WORLD. Suddenly, five years after she’d started, Gunning found herself an overnight sensation. She charmed the New York fashion world — scoring key advertising campaigns, working with the cream of the city’s photographers, and knocking her American contemporaries off the cover of every major magazine. Connolly even used her as the template for the miniature washerwoman dolls she sold in U.S. department stores for St. Patrick’s Day that year; the perfect Irish beauty.

In fact, Gunning wasn’t Irish at all — unless you apply the Irish football team’s famously relaxed eligibility standards. Her mother had been brought up in Belfast, whilst her father’s family were from Sussex (albeit proud of  a distant Irish heritage, that claimed a link to  famed eighteenth-century society beauties Maria and Elizabeth Gunning). Helen Anne Parker had actually been born in Southern Rhodesia, where her father was a coffee planter, and then raised by an aunt in England after her parents split up. But the Irish angle (and the Gunning connection) gave her story a romantic frisson — whilst rumoured relationships with Oleg Cassini and Colin Tennant ensured frequent appearances in gossip columns all over the world.

For the next eight years, Gunning enjoyed exceptional success. Whilst she remained based in London (in an all-white John Siddeley-designed apartment in Belgravia), there were repeat return-trips to America, and regular stints in Paris; there were lucrative commercial campaigns, for everyone from Hermes to Sears, and prestigious location shoots. And there was the uniquely intimate bond she formed with Richard Dormer — a decade-long pas-de-deux between photographer and model that kept her in the spotlight long after most of her rivals had retired.' There was even a brief return to movies, shortly before her marriage to Sir Anthony Nutting, with a blink-and-miss appearance alongside Laurence Harvey in ‘Room at the Top’; another cameo, as another beautiful, inevitably distant woman.“Warm yet remote, her incandescent beauty glows in a camera lens.” John French said of her, “but she keeps the secret of her smile.”