A cultural exploration of British houses in fiction 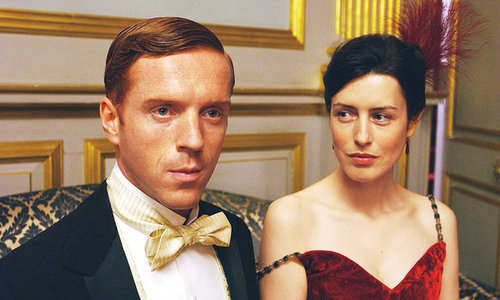 How far should we read fact into fiction? It’s a question that all biographers must negotiate as they learn about their subject and try to describe the life and the work in some harmonious narrative. All writers will channel experience into their fiction, whether they transcribe it more or less directly or whether they create a character who defies the very existence of the writer’s own world.

John Galsworthy seems to be of the former, at least in the pages of the Forsyte Saga, which makes for easy transference. But this sort of amiable companionship between life and art should also set off alarm bells, as I’m coming to find, to my own frustration: of course writers don’t always tell the truth about themselves, and untruths can endure as long as hard fact. 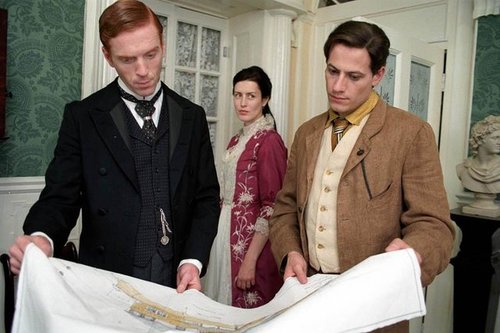 The saga of the Forsytes is set off by the fact that the enchanting, ‘artistic’ Irene, is unhappily married to Soames Forsyte. Soames is the second generation of a property-obsessed middle-class family whose adherence to strict codes of Victorian propriety warn against the double-edged dangers of both innovation and emotion. In other words, they want to keep things as they are and they don’t believe in showing their feelings, or possibly in admitting to having any. Irene, who is all beauty and pent-up feeling, falls in love with the penniless avant-garde architect Bosinney, who happens to be engaged to Soames’s cousin June, who is also Irene's only friend. In order to get Irene away from bad influences, such as June, and to give her something to indulge her creative interest, Soames has hired Bosinney to build a house for them outside of London, called Robin Hill. 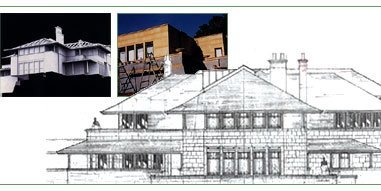 Robin Hill as envisioned by the creators of the television series

That’s the fiction. The fact is that Ada Nemesis Pearson Cooper married Major Arthur Galsworthy, John’s cousin, in 1891. Ada soon became intimate friends with John’s two sisters, Lilian and Mabel, and let them know that she was miserable in her marriage. In great sympathy for Ada, the sisters encouraged John to get to know her, feeling she needed all the friends she could get. Ada and John soon fell in love. Like Irene and Bosinney, they had an affair. Like Irene, Ada was an accomplished pianist, and like Irene, Ada was greatly admired by most people apart from her first husband.  Unlike Bosinney, John Galsworthy was not defeated by his romantic rival, though he was deeply averse to the idea of divorce at least as long as his own father was alive. His abiding wish was to protect Ada from any public shame and his father from the disappointment of having  a son who was party to it. Their affair went on for ten years, partly while Major Arthur was away fighting in the Boer War.

In another blending of fiction and biography, John Galsworthy Sr is mirrored in Soames’s Uncle Jolyon, who discovers late in life that he regrets many of his decisions that favoured property or social standing over human kindness. He is especially keen to become re-acquainted with the son he disowned for leaving his wife and running off with the governess. Though the tender character of Jolyon and the fondness for his children and grandchildren and his love of the natural surroundings at Kingston (the setting for Robin Hill) are all true, the reconciliation never happened between John Galsworthy and his father. This is because John, Jr, waited until his father died before making his relationship with Ada public knowledge, thereby provoking her husband to sue for divorce.

So far so true. But then things get a little tricky. In trying to find out what kind of house inspired Galsworthy’s designs for Robin Hill I came to a sort of wall put up by the man himself. In an essay memoir written many years later, Galsworthy acknowledged that the setting for Robin Hill was definitely the countryside around Kingston in Surrey, where he grew up. However, he claims that the design for Robin Hill was all in his imagination. As none of the houses he lived in in Kingston are anything like the design of Robin Hill, this seems to make sense. 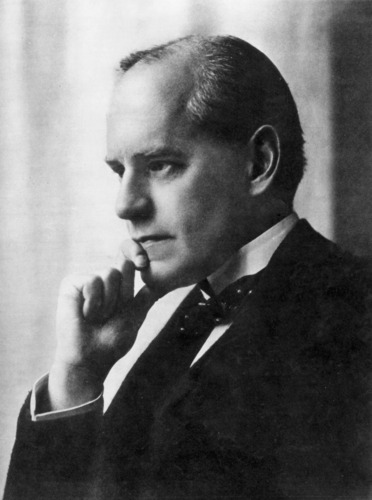 But having written about a numerous architectural projects in my time, and looking at the detail Galsworthy goes into when describing Robin Hill, I start to feel that something isn’t quite right with this story. Especially when you consider how careful the couple were to keep private the ten years during which they were having an affair. Then there is the fact that Ada destroyed all of John’s letters to her and most of her letters to him, and some diaries after he died. That she also tried to have his horse killed tells something either of her anger (whatever Ada’s gifts as an aid and amanuensis for John, there are signs of someone who valued control) or grief.  She soon collaborated on a biography of his life, written by C. V. Marrot, a friend, in 1935. While it is a valuable source of information, the book is painfully gushing in its descriptions of Ada and John and the very ‘special’ kind of love that they shared. In addition, some key points are omitted, such as the fact that Ada was an illegitimate child who was left a trust of money by her mother’s married lover, and the fact that she was probably a couple of years older than she said she was. Not huge lies, but still. 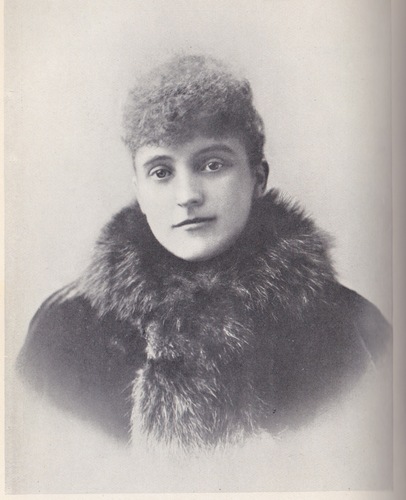 Which leads me to the house that inspired Robin Hill. Since most of Galsworthy’s early letters are gone, it’s near impossible to know which of the many places he lived in or visited affected him particularly. From pouring over the descriptions in the novel and looking at ‘new-fangled’ architecture from the period, I’ve come up with some ideas. Initially I was looking at important new houses being built, those that would have gained some publicity, in magazine articles perhaps, that he might have seen. I then considered all of Galsworthy’s travels–to Canada, Australia, Russia, the South Seas, Europe–and thought that, like his character Bosinney, he may have been influenced by, oh dear, ‘foreign architecture,’ as the Forsytes feared. But then something struck me. It was reading that definitive statement, ‘it was all in my mind’ that made me think again. Galsworthy was deeply loyal to Ada. Though they differ in their opinion of her, all of his friends and biographers agree that he went to great effort to protect her. To me this suggests that if there was a place that inspired Robin Hill it might have had something to do with the years of their affair; it might have been a place they were in together, but where they didn’t spend time after they were legally married. So if he were to cite this particular dwelling, it might have led people to make assumptions.

In this day and age it seems mad to go to such trouble to hide the evidence of the all-too-human experience of falling in love with someone at the wrong time. But even for this period Galsworthy had a particularly strong sense of propriety, both for himself and on behalf of those he cared about. Though he was hopelessly in love with Ada and she with him, he wouldn’t dream of asking her to divorce her husband (his cousin) while his father was still alive. And though most of their friends and social circle all knew of their affair, and were not critical, he still insisted on taking Ada abroad as soon as her husband brought the suit for divorce so that she would not have to bear public censure. Joseph Conrad, his great friend and literary colleague reassured him on more than one occasion that people were not too bothered by the prospect of Ada’s divorce. But John would not bring her back until they could be legally married. This perhaps runs counter to his willingness to carry on an affair for ten years with his cousin’s wife, however, he, and others, were convinced by Ada that her husband made her miserable and may or may not have committed such acts of physical brutality as Soames does when he 'exercised his rights' over Irene, and rapes her. (It should be noted that Major Arthur Galsworthy’s second wife and other family members flatly denied that his character was in any way violent or cruel).

So was Ada exaggerating her first husband’s sins? Was Galsworthy so overly protective of her reputation that he would conceal the location of the dwelling that sparked his architectural imagination? My investigation continues. I must admit it feels a little like prying, but so much of the story brings fact into fiction that it seems unfair to leave out such a key component, one that holds such a grip on the story, and on the characters. One of Galsworthy's editors later insisted that despite his Victorian hang-ups (or perhaps because of them), his writing was really 'all about sex', it was the motive and the end. And so it may be that Robin Hill, or whatever house it was modeled on, was too illicit, too tied up with unlawful sex for the author to claim it. If so, he did a pretty good job of keeping the secret.

If you liked reading this please do share it or support the book if you haven't already. Together we can make sure The House of Fiction get's published.

Congratulations on a fascinating piece. I suspect you are going to hold back the answer to this mystery until the very end, and its the puzzle so many people would like to see solved.

Fascinating piece. This project gets more and more intriguing!

This is all fascinating.. My Mother is allegedly the love child of John Galsworthy who apparantly had an affair with her Mother, who was married to his second cousin....

Wow! That IS interesting, Fiona. The biographies of Galsworthy maintain that he was always faithful to Ada. When was your mother born? (if you don't mind my asking).

My mother is 89 and often talks to me about Ada Galsworthy. In the 1930's she regularly visited Ada when Ada lived in a large house (bronshill court) in Torquay. She (my mum) was only a little girl but became acquainted with Ada's maid (Aunt Mine) and butler (uncle Arthur) (Rodda the cook) who used to visit a pub (white Hart, plainmoor)that my mum's father and mother (my gran/grandad) ran in Torquay.
They had also ran a pub (prior to moving to Torquay) called the Union hotel now called the Cromwell Inn at Bovey Tracey which is not far from manaton where Galsworthy and Ada would meet secretly before she was married to him.
My mum was made a fuss of by everyone as she was a little cutey Ada was besotted with my mum as she loved children and as she didn't have any of her own she gifted my mum many things (presents)that she still has today. Later, during the war my mum moved to Plympton St. Maurice and ran a shop with my gran. Ada would visit on occasion and even offered to buy a van so that they could deliver groceries from the shop. However my gran was too proud to take it! Later in the 50's when my mum was due to get married she turned up in her chauffeur
driven car and gave her a pile of expensive velvet material (to make curtains) as a wedding present. I often wonder what manuscripts (if any) to the books were kept in the furniture we have from Goldsworthy's time?