First of all, thanks to all new contributors: Hannah, Pete, Meghan, Patricia, Penny, Martin. The book is moving along. Just finished what I hope is the near-final draft of my chapter on Dickens and am settling down to write about the next novel and the house that plays such a large part in it. 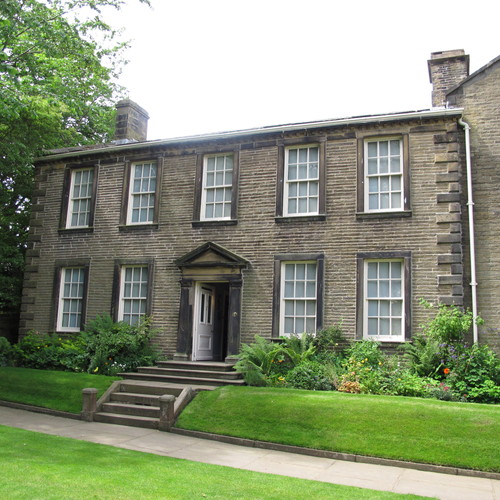 There are a few houses to consider in Charlotte Brontë’s renderings of Jane Eyre's experiences, and of course, the inspiration for Thornfield Hall. The Brontë Parsonage (now a museum), where she grew up, is a roomy eighteenth-century house perched in the hilltop village of Haworth and overlooking the moors that Emily Brontë painted with such passionate energy in Wuthering Heights. But Jane Eyre, though poor, doesn’t suffer her first deprivations in an impoverished cottage. It is amid the poisoned grandeur of Gateshead Hall that Mrs Reed and her children make little Jane the target of their abuse. But, despite the horrors of the 'red-room', Gateshead, as a place itself isn’t nearly as important at Thornfield Hall, and for that setting Charlotte called on some different houses that she experienced. 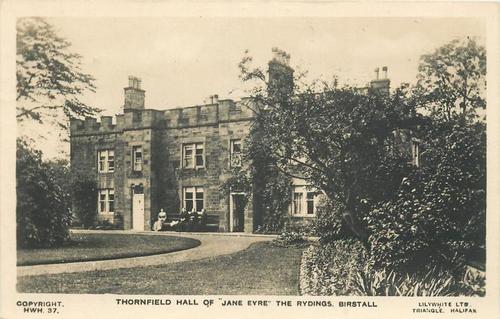 The Ridings in Birstall, near Huddersfield is a two-story house of grey brick. It was for a time the home of Charlotte’s close friend Ellen Nussey, and Charlotte visited with her brother, Branwell, in 1832. It is not a particularly grand house, but it has five bays and, perhaps most importantly, a castellated parapet roof, like Jane describes at Thornfield, ‘the grey and battlemented hall’. (The Rydings/Ridings is privatley occupied.) A more likely model for Thornfield is North Lees Hall in Derbyshire, an Elizabethan tower house, which Charlotte visited in 1845. It is taller, with three stories, and also has a crenellated roof, which can be accessed. Sitting on a rise, it offers wide views over woodland and green hills. It could be this view that Charlotte was thinking of when Jane Eyre ‘climbed three staircases, raised the trap-door of the attic … and looked out afar over sequestered field and hill’.  North Lees was built by the patriarch of a family by the name of Eyre and had associations with a legend of a mad woman who was kept in the one of the upper rooms. It was recently available for holiday lets but visitors can now only tour the gardens, where they can have tea and enjoy the views. 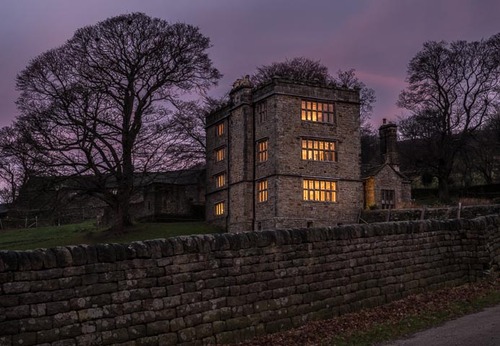 Charlotte is also said to have visited Norton Conyers, a Jacobean manor house with a medival Great Hall, in 1839. A large arch over the wide oak staircase marks where the medieval house would have ended. The staircase coheres with Jane’s description, as does the arch off the main hall, which frames the window, and the overall impression of grandeur, though the Dutch gables and lack of crenellation, do not. 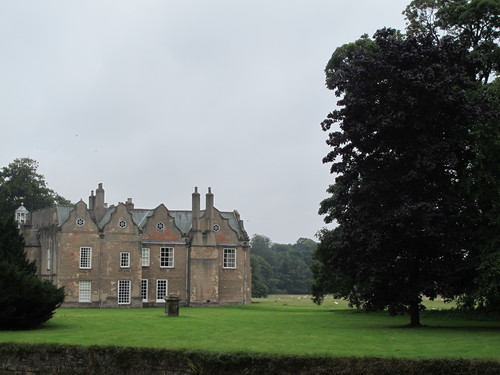 This house also comes with a legend of a mad woman in an attic, and in 2004, a concealed staircase leading from the first-floor gallery to the attic rooms on the top floor was re-discovered and unblocked by Norton Conyers' owners, Sir James and Lady Graham. It’s thought the staircase was built in the late 17th century to provide a direct route for servants. The Grahams believe that it was probably in use during Charlotte Brontë’s visit, though are unsure when it was blocked up. It is now neatly concealed, though acessible, as it may once have been, behind a spring-activated panel in the wall of the gallery. The stair doesn't lead to any one prison-like chamber, but to an enfilade of little rooms, which were no doubt servants’ quarters. However the farthest room is well removed from the stair and Sir James feels it would have been quite a secluded and lonely place to be. It was in this far room that woman of the legend–who might have been suffering any of a multitude of misunderstood ailments, from post-natal depression to anxiety–may have been confined. And it is no wonder the room sparked Charlotte's writerly imagination. (Follow the link here for more information on the restoration work and the discovery of the stair.)

Norton Conyers has been in the Graham family almost continuously since 1624, and Sir James and Lady Graham have lived in it since 1982, when they began the painstaking work of restoration, which is still in train. Among some of their other discoveries were some decorative boards imported from Genoa and dating from the early 16th century. These might seem strange to the modern eye, as they were each finely painted to imitate other materials, such as velvet and linen, and probably formed a portable decorative screen. There are also a number of wonderful paintings, including ‘The Quorn Hunt in 1822’ by John Ferneley, a portrait by William Beechey, and a man in armour by Sir Peter Lely, c. 1650, possibly the painting Jane Eyre describes as ‘a grim man in a cuirass’. The garden was probably less spectacular in Charlotte Brontë’s time—during my visit in early September it was literally bursting with colour, and is now a popular wedding venue. Visitor information is here. 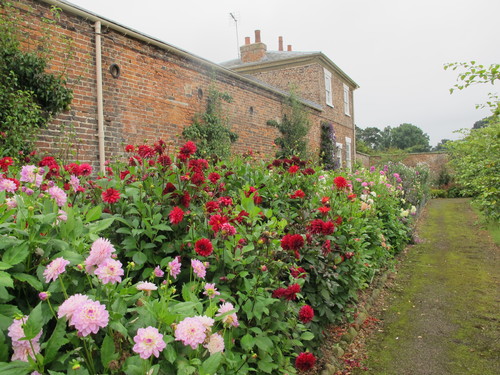 Above: Dahlias at Norton Conyers

Great stuff Phyllis. Seems like every house she visited had a loon in the attic. You're nearly there, keep going, wrack your brains, write to everyone. If you need any help get in touch.

Thanks, Danny. Yes, a case of 'another attic, another madwoman'. Congrats on going to press!