Forget everything you’ve heard about strippers: this book is an antidote to stigma, shame and stereotyping

When I woke up last Saturday I was surprised to find a full-page review (see below) of my first book, The Ethical Stripper, in a major broadsheet newspaper, The Times no less. I wasn't surprised to learn that it was written by Julie Bindel, a fervent feminist in favour of sex industry abolition. The editorial decision to give Bindel a platform, to position her as the voice of authority on sex work, proves so perfectly why I felt compelled to write the book in the first place. Yet again, the mainstream media machine and its journalistic apparatus has failed sex workers. In fact, calling it a “review” could be misleading, since one may expect a book review to be written by someone who is at least impartial to the material. If there is one thing that Julie Bindel is not, it’s impartial to the subject of sex workers’ rights.

While writing the book I knew I was playing into a game of rhetoric wars, which is always won by those with the most clout. But I wonder how much Bindel’s voice still resonates, when it so clearly shouts down and rides roughshod over the lived experience of an actual sex worker (me) after I’ve endeavoured to encapsulate all I’ve learned from many years of working in an industry that most people would rather not talk about. Sex workers’ rights are a feminist issue, and Bindel is one of the most powerful feminists around. The Ethical Stripper is an appeal for allyship, but I knew there might be some people too invested in their beliefs about sex work to listen.

Bindel writes “the reason so many feminists oppose blanket decriminalisation is because it legitimises pimping, brothel-owning and sex buying.” This sentence neatly sums up how far she has missed the point of the book entirely. Activists like myself are not interested in “legitimising” sex work; we are simply asking for it to be safe. The reason so many sex workers, human rights organisations and major institutions globally, including the Royal College of Nursing, European AIDS Treatment Group and Amnesty International, are opposed to blanket criminalisation is because it drives sex workers into increasingly precarious and dangerous circumstances.

The harm-reduction principle is not difficult to understand when it’s explained in precise terms. Most people are introduced to the harm-reduction argument via addiction and public health; put simply, criminalisation does not reduce harm. Criminalising the sex industry doesn’t create positive social outcomes, but rather produces underground marketplaces handing power directly to those willing to break the law, i.e. pimps and brothel-owners. This is where violence and coercion happens – criminal markets are dangerous places. So what would you rather have? A regulated, visible marketplace, where justice can be enacted? Where workers can access their labour rights? Where CCTV can back up claimants when workplace abuses occur? Or women doing sex work with no rights, no visibility, no safety, and no access to justice?

I’ve worked in strip clubs since 2006. Most of them aren’t great places, and I’m no apologist for badly run businesses. I’ve also worked for private agencies, performing sexual labour in unregulated spaces – hotel rooms, flats, Airbnbs. I remember one party in Orpington, a group of nine city boys playing poker, wanted a topless waitress to serve them drinks all night in their flat. They sent me to answer the door to the pizza deliveryman, and started soliciting me for ‘extras’. This experience taught me that if anyone thought men behaved badly in strip clubs, they behave a whole lot worse when they know no one is watching. Which is how all abuse works – when it’s hidden, it can’t be challenged.

Bindel’s “review” has fallen into a predictable pattern I described in detail in The Victimhood Industry, a chapter she bizarrely references. The insidious narrative laid out by Bindel and other Radical Feminists is that sex workers are in favour of empowering and emboldening perpetrators of exploitation and violence. This straw man argument dominates the airwaves, reducing sex worker advocates like myself to mere puppets for the pimp lobby, turkeys voting for Christmas. It's this kind of rhetoric that is incredibly harmful to sex workers; it not only ridicules and belittles any of the crucial work done by sex worker-led UK organisations, such as SWARM, Umbrella Lane, National Ugly Mugs, X-Talk, DecrimNow, and of course the most established group, the English Collective of Prostitues (against whom Bindel seems to have a personal vendetta given how castigatory she is towards them). It also holds us back from having serious, progressive dialogue about how best to regulate and police the sex industry, and, more importantly, empower sex workers to fight their own battles.

There’s good reason for The Times to offer Bindel the gig of reviewing the book, since they can rely on her to rattle off an attention grabbing article for readers, accompanied by the obligatory titillating image of a stripper. With the deepest of ironies, the photo selected this time was taken at an event organised and hosted by the East London Strippers Collective, an organisation I’m proud to be part of, which serves to challenge existing exploitation in the sex industry by offering a worker-led ethical business model, in which workers set their own rules, create their own working conditions and uphold their own boundaries. But I would assume these nuances would be completely lost among the Times readership, shielded from such notions within their ideological gated-community, protected by their paywall. In fact, trying to get a rebuttal published in any mainstream newspaper has proven impossible, which goes some way to demonstrate just how silenced sex workers really are.

Despite The Ethical Stripper being loaded with nuances about sex work from beginning to end, nuance seems to be something that Bindel has utterly failed to appreciate, internalise and digest. But then why would she? Bindel is one of several abolitionist voices that I have critiqued. For instance, her questionable research methods when producing public reports, such as “Profitable Exploits: Lapdancing in the UK” for which (according to her own report) she appeared to have gathered evidence by interviewing strip club workers without them knowingly consenting to being interviewed; or research for “Big Brothel” that consisted of recruiting male friends to ring up numbers advertising sexual services to ask the nationality of women selling sex, which was then translated into unsubstantiated evidence of trafficking, a claim that was swiftly condemned by a list of academics and researchers from nineteen universities as misleading. Ironic then that Bindel says in her review The Ethical Stripper lacks credible research.

But most striking of all, to me, is not her choice of words, but her tone. Sneering, derisory, calling the book “flimsy, modish”, and misrepresenting the gist of it, I question how powerful this kind of ivory-tower feminism really is. Bindel sounds like a bully, refusing to let anyone else on her turf, since she has dominated the narratives about sexual exploitation throughout her career. But isn’t it time that sex workers themselves, with lived experience, who can express their concerns and self-advocate, are allowed into the national conversation? If there was one intention behind The Ethical Stripper this is precisely it. 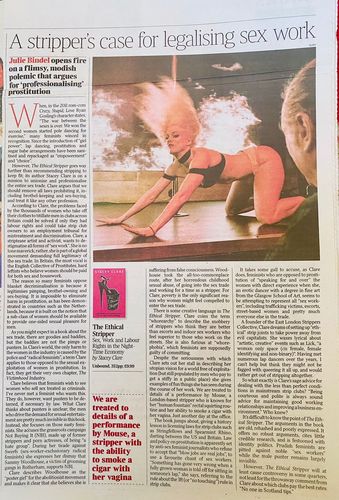 You are a gem of a writer, Stacey. Your book appears to be spotlessly researched. Anyone who says the opposite is just biased.

I'm hopeful that her transphobic, oppressive model of radical feminism is becoming increasingly outdated; she is talking to an ever-reducing market. There is a reason she is in The Times. This isn't a review, it's a rebuttal from a biased point of view.

The digital edition of the book
Buy now