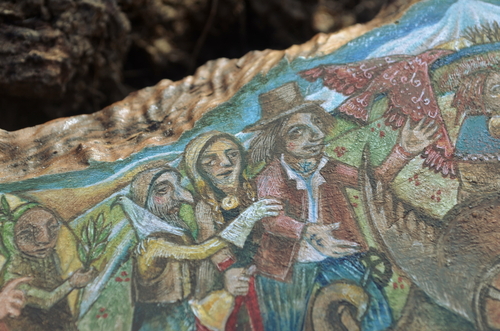 Along a ragged, root- and fire-cracked path a band of wanderers make their way from dark to light, from some city of the end-times to snow-green star-milk mountain and Beyond. Here are a motley, wild and storied bunch of characters... some recogniseable from Sylvia's uncanny and beautifully-wrought pages, some strange and unknown, all following that Wheeled creature of this Tatterdemalion world - Lyoobov - painted first when I was just 18, and painted again aged 36, the paint of many chapters of my own story under my fingernails already. 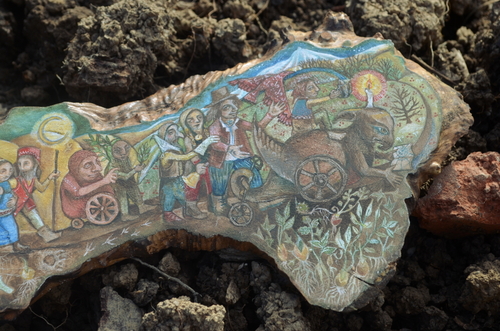 Painting the cover for Tatterdemalion was a strange and unnerving thing to have to do. As you will all know, this book of ours emerged from paintings I had already created and the story grew from there, concocted and woven on Sylvia's unique ink-loom. My way of working is very non-linear, and images come most easily when I can attend to that other place dwelling just past the corner of my eye, always making itself known to me, and yet requiring a certain kind of non-structured, trusting attention. 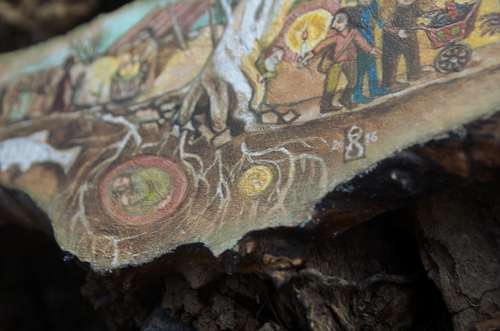 I appreciated so much the back-to-frontness of this book, the fact that the story came after the pictures, most of all I appreciated the fact that Sylvia had opened the doors in my paintings and gone through, bringing back her beautiful tale. Characters and imagery I had already invited through from that other place were given names and narratives - a wonderful and strange experience for me! But now - I had to paint the front cover, and return to the traditional order of doing pictures after words. This was a challenge! 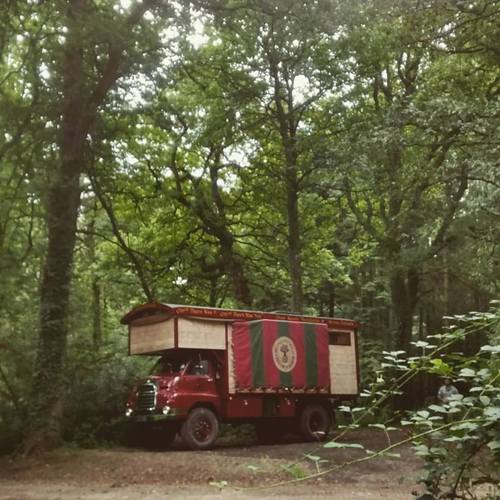 It is worth noting that the environment in which I was to be painting this new work was a totally topsy-turvy one from previously in my life: now I was a mother, embarking with my little family on a wheeled life in our travelling theatre-home - Hedgespoken. In spring this year we begun our journey of the UK's byways and festivals and woods and fields, taking stories with us and telling them along with my art, from the fold-down stage on the side. 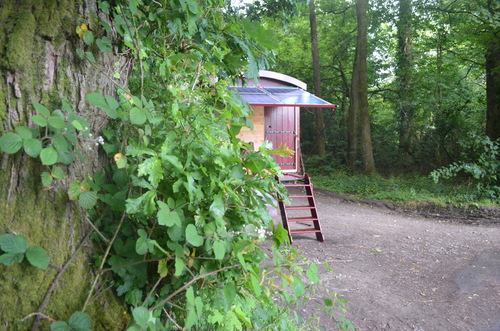 Such a perfect Tatterdemalion-esque setting could not be imagined, and yet I have struggled to find energy, time, brain-space and physical space to do much creating since becoming a mother, not least in a liminal offgrid itinerant life; and so my tentative first efforts have been mostly done perched at our little table in the truck, a cup of tea beside me, and my young son exploring the woods with his dad. 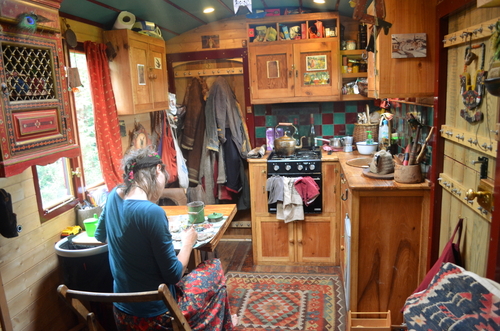 Here I began to call out with my paintbrush to these characters of our book, mostly to ones not yet painted by me, and to the world this work conjures in our hearts and imaginations. I had a paper manuscript of the book, but I had decided not to comb the text slavishly for images to "illustrate". Rather I would paint and see what came, the bones of the story held up in me, swinging in the winds of my thoughts. 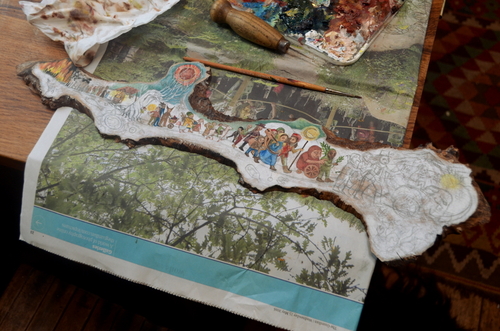 When I returned to the text in the evenings, I had on many occasions the uncanny experience of reading what I had just painted, or recognising the spirit of the thing I had been working with earlier in the day. This isn't an easy process or discovery to put into words, but I found myself led rather than forging ahead down this tatterdemalion path, and reassured in my method by the recurring conincidences between word and image, once more back-to-front, though in a different way. 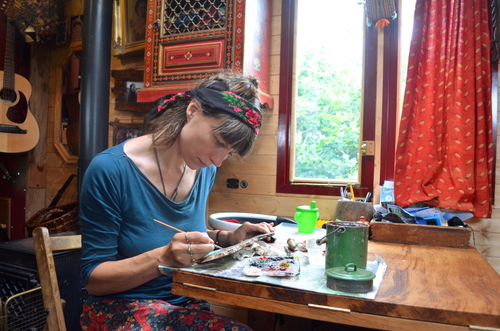 What has emerged is painted in oils on a long thin slice of wood, and represents a journey - all those undertaken in the story, as well as some kind of deeper, rock-time journey - the journey made by our stories and ancestral memories through our bones and feet and earth and tongues and hands and things left behind. There is much here about What Is Left Behind as well as What Lies Ahead. It felt right to be painting a long ragged road, with much buried beneath it, as well as walking upon it. 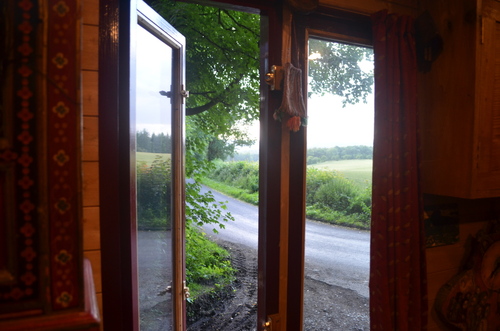 And as for Lyoobov - that Elephantine beast on wheels that I painted so long ago - how was it to paint him again? I never usually recreate a character in a second painting once I've conjured them once. I'm not sure why, but it doesn't seem to work. This time, however, some kind of internal/external transformation had to take place, and this creature was key - as you'll see when you read the whole tale. Somehow he was the same but different, as I am. 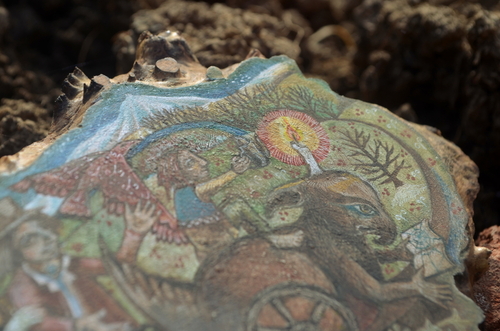 And so my painting, long and road-like, is to be wrapped around these words which are wrapped around my paintings. Like a seed-husk, I feel I have protected this precious work with magical adornment and somehow retold the tale in miniature, just as the whole story of the oak is told in its acorn, and again in its roots and rings and bark and leaves. 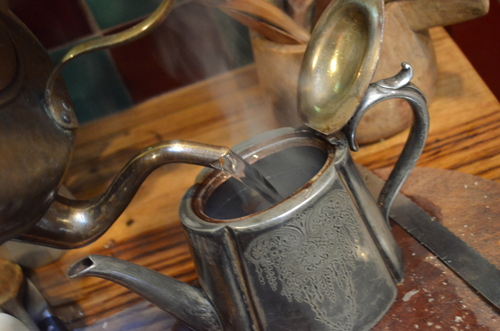 Sylvia and I have many loves in common: wheels and tea and stories seeming to be some of the most important! Happily we got to share them again, back in September at Dark Mountain's Base Camp, where we joined our arts on the Hedgespoken stage for the first time: Sylvia read an excerpt from the book, with musical accompaniment and puppetry by me, as well as words and music from the dark from our menfolk Tom and Simon. 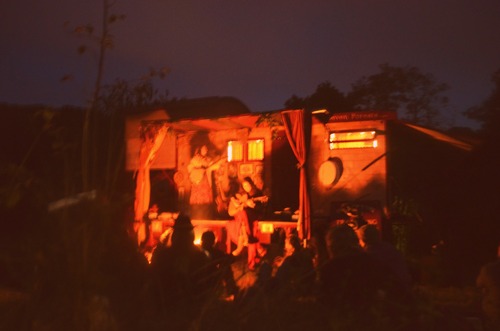 We then talked about the book's creation and opened up a discussion with the audience which helped to cement the magic of the event. That evening was lantern-lit, firelit, smoke- and star-blessed; preceded by warm, beautiful music from the Crow Puppets (above) and followed by the epic and wonderful telling of the Welsh Gypsy story, The Castle of Melvales by Tom, we felt that we had for the first time made this painting come true ~ 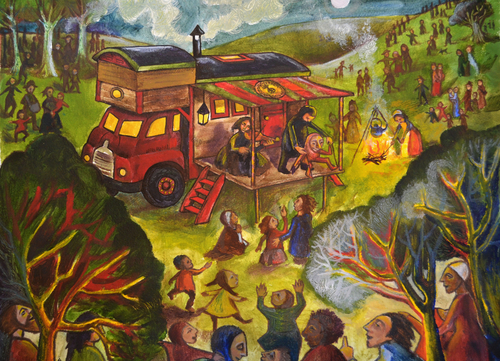 And there was indeed strong magic in the air that night, and I feel blessed to be part of a powerful creative collaboration which is beginning to send its strong taproots out into the world and into people's hearts and hands. 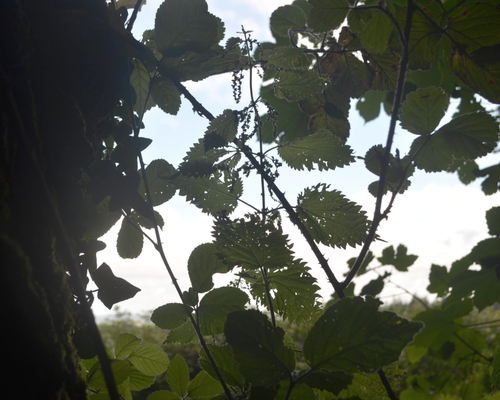 Sylvia and I share a overpowering longing for/belonging to the olden and marginal, the wild, storied, ragged and beautiful, otherworldly places and times and peoples of this world, and in this almost-born book of ours, that longing is made manifest on paper to travel where it will. For that we have the folks at Unbound to thank deeply, that such an unusual and powerful piece of back-to-front artistry can come into the world to be shared. 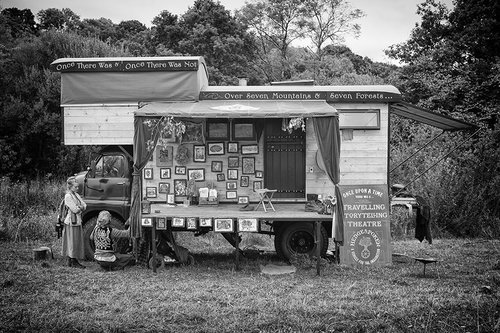 Where our roots and wheels and paints and inks and the stars take us next, we shall tell of one day that is not today... 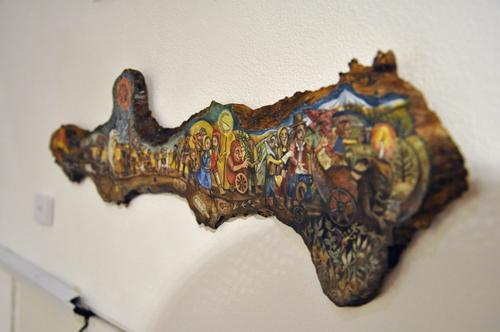