One of the many wonders of Sir Gawain and the Green Knight is its magnificent setting; thought by many to be the Staffordshire Roaches The evidence is compelling...

In translatiing and illustrating my telling of Sir Gawain and the Green Knight, I've been fascinated by trying to understand the references made by the (unknown) poet and to grasp not just who he was but also where he was living and writing. I've also been determined to reflect this research not just in terms of the translation and the illustrations but also by a series of detailed notes and supplementary information for readers, which also features in the book.

My aim has been to help today's reader not only enjoy the poem but also, hopefully, to encourage an engagement in its history and landscape. The Green Chapel itself is a case in point.

Green - the colour of evil

The Green Chapel therefore is a dark and looming place which the poet places in our mind at the beginning of the story, where it lurks until part four when we are finally taken there. And what a place he describes...

Nobot an olde cave, or a crevisse of an olde cragge...

The poet is determined to show the Green Chapel not as a church, but as a place where the Devil himself worships. Indeed, Gawain says he can feel the Devil's presence in all his five wits; he is overcome with a sense of foreboding and danger.

It is not a chapel; nor is it a church. It is tump in the landscape which is overgrown with grass and which, when he enters, he describes as nobut an old cave. As he says, "it is the worst-cursed church that I ever came in". This compelling description makes us consider whether the Green Chapel was indeed based on a place - or places - known to the poet. In the Staffordshire Roaches, we find it. 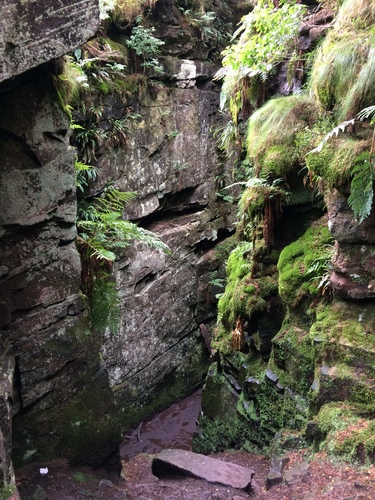 Looking down into Lud's Church - into the Devil's lair...

In the Roaches, the low peaks at the end of the Peak District bordering onto upper Staffordshire and the Cheshire plain, there are two places of great signficance which are seen by most as being inspirational behind the creation of the Green Chapel.

The first, at Lud's Church near the village of Flash, is a wonderful evocation of the evil described by Gawain. From its indistinct entrance, the visitor descends into a long gully, maybe thirty or forty feet deep, overgrown - just as the poet says - with herbage. Here, one can imagine indeed the beknighted Gawain facing his nemesis. On a recent trip there with some old friends, one of them said, unprompted, "I was expecting a chapel". In his somewhat disappointed words, we almost hear too the similar shock of Gawain: he also expected a building; all he sees is a dark crevice in the hillside.

Yet while we see in Lud's Church a wonderful interior which so matches the poem's atmopshere, the exterior does not reflect that given by the poet at all. Instead of being in the middle of a plain, visible for some distance, it is hidden in woods in a cliff side. This is where Wetton Mill comes into play. 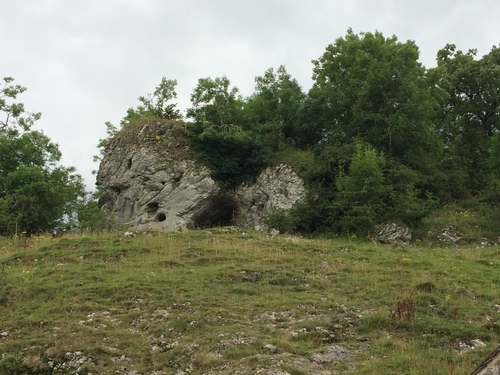 The mysterious cave above Wetton Mill - the real Green Chapel?

Wetton Mill, on the Manifold valley, is a strange place indeed. Here, above a bourne - just like the original - is a mound with a cave. We can imagine Gawain going to the top of it - its roffe or roof. We can imagine the Green Knight calling to him from the other bank. We can see that the river is easy to cross. From the entrance, we can even see another great cave in the distance, the home of something darker. Here indeed is the perfect location.

Yet the interior is not as evocative as that at Lud's Church. Almost certainly the roof has collapsed since the poet's day and much of the cave has filled in, which means that it now only has one way in (although there is a trace of another). We can experience the atmosphere of the dark valley here but we need Lud's Church to convey the interior of this evil place where the Devil's deeds are done.

So it is most likely that the Gawain poet, who knew well these lands, in all probabiltiy combined the features of Wetton Mill and Lud's Church; much in the way of a modern film maker in creating a complete, morphed, sensation for the viewer. Of course, everyone has their favourite candidate. In the book, I'll provide some additional information about the Green Chapel and its inspiration which I've not included here and which I hope will lead readers to explore more of the land of Gawain.

With this update, I've added a film I made for fun at Lud's Church, with the kind help of Steve Brown, one of my old university friends. I should stress, this is a reading of the original and NOT my translation - just in case it's not obvious!  I apologise in advance about the quality and the mispronunciation of some of the words - at the time we were filming we could hear parties of walkers coming in at the main entrance and the dog of one of my friends was whistling with impatience (which you might just hear) so it was a rushed, one-take affair via i-phone! Nonetheless, I hope you enjoy it - the reading tells of the point where Gawain arrives at the Chapel and then hears the axe being sharpened elsewhere in the valley before his nemesis crosses to meet him.

The book is now published - available through all good bookshops!

A more detailed assessment of the Green Chapel, its location and role in Sir Gawain and the Green Knight can be found in my illustrated translation of the poem. The book is now published (July 2018) and can be purchased at all good bookshops (including the bookshop at the British Library, home now of the original manuscript). If you would like a signed and dedicated copy of the book, I have a small quantity of the special de luxe collectors's edition still available. If you would like a copy, please follow this link.

We have a FB page "Sir Gawain and Leek" which seeks to draw attention to the landscape of the poem around Leek Staffordshire. Please join!

Thank you for the link, Clive. I will take a look a the page. Sounds fascinating!