Green Man or Green Knight in the story of Sir Gawain? 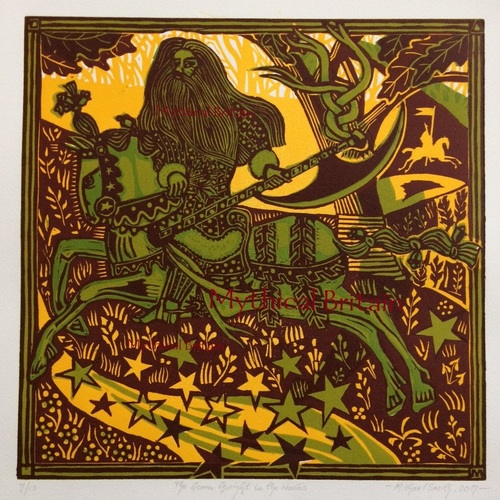 One of the recurring themes in the discussion about the Green Knight in Sir Gawain and the Green Knight is that he represents the Green Man of folklore. While it is possible that the poet may have drawn from this legend in the creation of his “enker-grene” monster, an association of the character with the legend is much more problematic.

The folklore of the Green Man

The Green Man in folklore is perhaps best known from carvings in churches and other buildings. He is known around the world and, with his foliate image, is associated with rebirth. His carved image often shows either a flesh of leaves, leaves emerging from the mouth, or more complex forms where the vegetation emerges from many orifices.

We see these carvings in Romanesque architecture (for example at Kilpeck in Herefordshire) and in buildings such as Tewkesbury Abbey and Winchester Cathedral. They appear on corbels, in sculpture, on misericords and as roof bosses and are a popular theme.

The Green Man folklore asks that we accept that there is a connection between the Green Man and nature. We are asked to see nature as all powerful with strong connotations with re-birth.

In Sir Gawain, this link is not evident. While the Gawain-poet makes extensive use of nature in his setting of scene and mood, he does not ask of the reader to accept a link between the Green Knight and the Green Man of folklore.

Whereas green men are often identified with the wild men of the forest, the wodwose, the Green Knight is not described as such. Indeed, we are explicitly introduced to wodwose in Gawain’s journey across the wilderness in Fitt 2. The Green Knight, on the other hand, is never described by the poet in these terms; the two are entirely separate.

Nature, when used by the Gawain-poet is used as a positioning device, either in celebration of the passing of the seasons (Fitt 2), or as creating a wild idyll (in Fitt 3), or as the backdrop to the mood or the horrors of the story (snow and ice appears to be retributional, for example, in Fitts 2 and 4). Nature in Sir Gawain and the Green Knight exudes all the character of an Almighty God’s creation.

The Green Knight as evil incarnate

The Green Knight, on the other hand, is a sparkling giant of a man. While carrying vestigial paganistic elements (e.g. the holly bough), he is first and foremost a knight - albeit one dubbed so by evil forces. He is described at one point as “elfish” but overall he carries himself as a man of court, not a man of the green.

So the Green Knight in Gawain is not a man of the woods, he is, quite explicitly, a creation of dark magical forces. We know that green in mediaeval thinking represents the evil of the devil. His creation by the will of Morgan le Fay, who is described as learning the magic of Merlin (Fitt 4), strongly identifies the Knight as on who is trapped by dark magic, not as a nature figure.

The Green Knight himself is described as a monster (for example, by the guide in Fitt 4, who says that he will attack anyone who passes his Green Chapel). He also represents someone overwhelmed by some monstrous spell, as shown by the way in which Morgan can simply shape-shift Lord Bertilak into the Green Knight at her calling. Indeed, when we contrast the bonhomie of Lord Bertilak with the ghoulish force which is the Green Knight, we are made to consider the struggle between the ego and the id. We feel sorry for the man trapped within the green.

Crucially, twice in the poem, the Green Knight wonders off somewhere untold. He is not a spirit of the forest; he is the creation of magic and is not shown to be a forest dweller. Indeed, although he is “enker-grene” (green all over), he is never described as foliate in any form. He wears the clothes and style of a mortal man of the fourteenth century; his hue makes him ghoulish rather than sylvan.

Part of a Christian corpus

So, while we might choose to identify the Green Knight as some form of King of the Forest, the Gawain-poet does not steer us in this direction. If he is anything indeed, he is the lord of the wilderness – the haut desert – and his Chapel by the river is, as Gawain says, where the devil might sing his matins around midnight.

While in some way the story may draw on older legends with possible folkloric links to the greenwood (for example in referencing the intense green of the holly bough in Fitt 1), by the time this story was written, a greater Christian morality was more firmly stamped.

Indeed, if we view the poem alongside all the others which feature in the greater manuscript which is Cotton Nero A.x, we are compelled to read it as a story with Christian and moral overtones. We are frequently reminded of the mediaeval cult of Mary, of the will and glory of God, of Christ’s protective arm. We are told of shame, sin and pride.This is the work of a poet-mentor.

It is our understanding of Gawain’s position as a Christian Knight against the dark forces of magic in a wilderness, akin to Satan’s exile, which is crucial to an understanding of this magnificent poem. The significance of the Green Man, if indeed he has significance to this story, most likely rests in earlier tales lost to us.

In Sir Gawain, it is the Green Knight, not the Green Man, who rules. Come you there, be you killed, as that knight does ride. He is a human being shackled by the dark forces of a hideous black magic. He is not a bringer of life and rebirth save only this: Gawain's salvation at the end occurs on the Feast of Circumcision; Gawain has had a spiritual - not a natural - rebirth.

He is born again, a  most Christian Knight who knows well his inner failings and his insignificance before God.

Once more into the breach!

Thank you for supporting my translation of Sir Gawain and the Green Knight, the greatest poem of the Alliterative Revival of the fourteenth century. The book has now been published and your special collector’s edition should now be with you. But the journey is not over…

If you have enjoyed my work with Sir Gawain (and these updates) you might well be interested in my new translation of King Arthur’s Death, second only to Gawain in its quality of English and poetic form.

If so, please check your copy of Gawain and use the special promotion code on the cardboard additional bookmark supplied with your book. It would be super to have you on board for my next journey into the poetic majesty which is the Middle English of the fourteenth century Alliterative Revival - as indeed it would be for any new subscriber with an interest in my work.

I wonder if I should be concerned. I haven't gotten my copy yet? I am in the US, but I saw that last week people in the US (Massachusetts) had already received it. So I would think I should have it by now. Is there a way to check if there is a problem? I am Dean Wiegert, in Wisconsin, USA.

never mind. got it finally.

Dear Dean - sorry not to have seen your note. I am so pleased it arrived! Michael