Of the seven Magnificent Women who signed the document creating the Women's Engineering Society on 23 June 1919, one name stands out. At the foot of the list is Laura Annie Willson of 22 Savile Park, Halifax, West Yorkshire. Like her fellow founders, Mrs Willson is described solely by her marital status ('married woman' or 'spinster') but, unlike the rest, she had begun life with no financial or educational privileges – and she had twice been imprisoned for her rebellious activities.

The daughter of a dyer's labourer, Laura Annie Buckley was born in the Skircoat district of Halifax in 1877. Her mother, Augusta, made only a mark (rather than a signature) on her birth certificate. Laura Annie appears to have attended elementary school, but by the age of ten she was working as a 'half-timer' in a textile mill. At the time of her marriage in 1899 to George Henry Willson, she was described as a worsted coating weaver. The Willsons had two children, George (born 1900) and Kathleen Vega, known as Vega (born 1910). The photograph below shows Laura Annie (on the right) with George and Vega, and George Willson senior at the wheel. 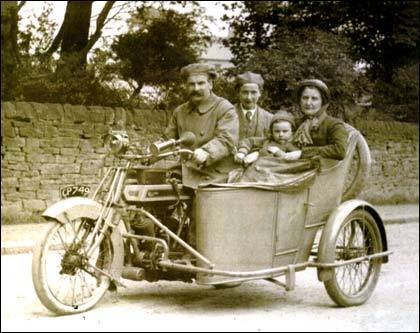 By 1912, when this picture was taken, Laura Annie Willson had gained a reputation as a political agitator and was well known to the authorities. Five years earlier, as a member of the Women's Labour League and the Women's Social and Political Union, she had taken part in a weavers' strike at Hebden Bridge and was arrested on a charge of 'violent and inflammatory speech'. Appearing on 7 February 1907 at Todmorden magistrates court, Mrs Willson was defiant. 'I object to the constitution of the court because it is constituted of men only,' she said, demanding to know why there were still no women lawyers. She was found guilty and locked up for 14 days in Armley Prison, Leeds. 'If they could sentence me for thinking, I would have been sentenced for life,' said the prisoner on her release. 'I went to gaol a rebel, but I have come out a regular terror.'

A few weeks later, on 20 March, Laura Annie Willson was one of 75 women arrested after a large suffragette rally at Caxton Hall, Westminster, that concluded with an attempt to gain access to Parliament. Found guilty of disorderly conduct, she was sentenced to 14 days in Holloway prison. She and the other 'martyrs' were given a heroes' welcome on their return to West Yorkshire, where the suffragette campaign continued with increased vigour.

On the outbreak of the First World War, Laura Annie (as she was known to her family and friends) continued her fight for women's rights at Smith Barker & WIllson, the lathe-making factory in Halifax that she ran with her husband, George. She organised and supervised the women employed at the factory, the number of whom had grown substantially as fighting men left for the Front. Realising that many of the impoverished mothers were going without food – indeed, virtually starving – so that they had enough money to feed their children, Mrs Willson set up a canteen at the factory to ensure that the women were properly nourished. (This was one of the first canteens of its type, and the idea soon caught on at other factories around Britain.) In 1917 she was awarded the MBE for her contribution to 'Women's Work in Munitions'.

Like many other women who had held down engineering jobs during the war, Laura Annie Willson was incensed by the Restoration of Pre-War Practices Act and similar measures designed to force female industrial workers back to the home after the war – and it was the desire to protect the position women had won for themselves in industry that brought her together with like-minded pioneers in 1919 to found the Women's Engineering Society (WES) and, later, to become a founder member of the Electrical Association for Women. She was president of WES 1926–28.

After the war, Laura Annie Willson applied her knowledge of labour-saving ideas from industry to housework and house design. This inspired her to construct modern housing for working people to include the latest gas and electrical appliances. She began the construction of several housing estates in the 1920s in Halifax, later moving to Englefield Green in Surrey, where she did more of the same. She was the first woman member of the Federation of House Builders. Shown below is an advertisement for one of Laura Annie's 1920s housing developments in Club Lane, Halifax. 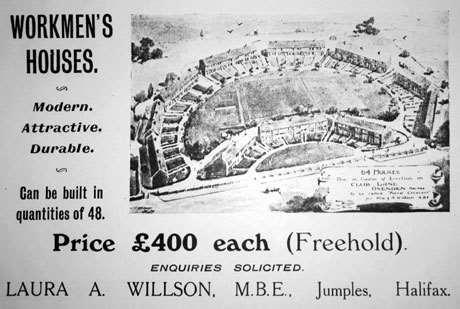