(Skip to the end if you just want the latest updates on the book.)

I distinctly remember the moment it hit me, a year or so into researching this book, just how much of the history I'm trying to research and share happened before the modern Web existed. It was a frightening moment, like crap — how can I fill all these missing data points in? The Internet Archive is an incredible resource (and I'll get deeper into explaining how/why in a future post), but its Wayback Machine records from the mid-90s are patchy at best — and non-existent prior to that.

Yet, aside from the handful of relevant books I found and the first-hand accounts coming from interviews, the current and archived Web was my main research focus at the beginning. Once it became patently clear that I was missing most of the picture, I expanded my net. I dug deeper into old issues of Macworld and other magazines and looked at early Mac game-centric Web pages not only for the stuff that was directly applicable but also for new research leads. And between that and my ongoing interviewing efforts, I came to an understanding that I would never get an accurate picture of the early Mac gaming world without studying what went on in the communities. The culture around the Mac.

Now I can safely say that I still have much to learn and discover, as I was very targeted and precise in my research (because I wanted you to be able to read the book as soon as possible), but I want to share some of my findings and a bit of my approach in exploring these pre-Web communities.

When I say pre-Web, I primarily mean Bulletin Board Systems (aka BBSs, accessed directly via dial-up modems), walled-garden portals like AOL and CompuServe, and Usenet (short for "users network") — a sort of proto-Reddit, essentially a news and discussion system, where messages were posted to newsgroups (like categories or subreddits) and distributed across a network of servers and through to the email accounts of subscribers.

BBS message and file archives are extremely difficult to come by (although that's been improving in recent months) because they were generally small and usually accessed only by people in the same area code (i.e., local calls), and as far as I know there are unfortunately no archives of AOL messageboards from the era (all I could find was this set of files, which will be useful in researching whatever Mac gaming history stuff I do after this book), but Usenet is a different story.

Google has an extensive archive of Usenet posts, searchable through Google Groups (here's comp.sys.mac.games), while the Internet Archive hosts the utzoo-wiseman archives (totalling nearly 11GB and over two million files, when unzipped). Between the two of them, I had access to a huge portion of the 1980s and early 90s Mac gaming-related discussions and some of the mid and late-90s discussions (along with lots of discussions unrelated to Mac gaming from the era, spanning all sorts of topics in and outside of the computing realm).

So how's it structured? And what's in there? Well, let's take a look: 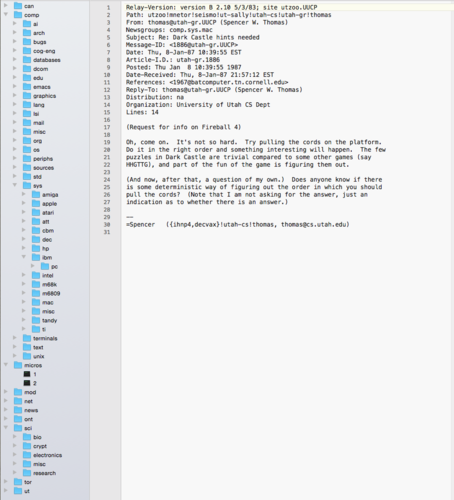 This is part of the utzoo-wiseman archive, containing messages from 1986 and 87. I've included one of the messages, which was responding to a request for Dark Castle hints. On the left, you can see the newsgroup structure. At the top level, you have things like "comp" for computers and "sci" for science, then beneath them you get more specific — like "os" for operating systems and "sys" for different computer systems like Amiga, IBM-PCs, Macs, and so on. For obvious reasons, I mostly concerned myself with newsgroups and messages archived under comp.sys.mac. Interestingly, it wasn't until 1988 that subgroups for HyperCard and Mac programming appeared and until 1990 that comp.sys.mac.games was born. (Further subgroups for specific genres appeared throughout the 90s.) For anyone interested, here's a Google Drive folder I made containing all of the comp.sys.mac.games messages in the utzoo-wiseman archive. They can be opened in any text editor, although you may have to append .txt to the filename before your app of choice will recognise them.

Later, there would also be Mac gaming newsgroups under rec.games.* and alt.games.* (e.g. alt.games.mac.escape-velocity, alt.games.myst, alt.games.mac.marathon, etc). The utzoo-wiseman archives don't include them, but there are some archives around. I've found those harder to find and sort through for useful information, thanks partly to the huge growth of spam messages from the late-90s onwards and partly to the incompleteness of the archives.

The archives on Google are nigh-impossible to browse, and to get good results you often need to search within a specific newsgroup, but they do include many messages that the utzoo-wiseman archives do not. (Plus they're way faster to search.) So I tended to use the utzoo-wiseman archives to browse for keywords and a general feeling of what was being discussed, while if I wanted to find something specific I tried searching through Google Groups.

Now, how did these benefit me?

I had two main things I was looking for in browsing and searching through these newsgroups: 1) I wanted to know what games people on Usenet were talking about, knowing that even though this didn't necessarily reflect sales it would likely reflect what the tech-savvy influencers (that is, the people who made things successful through word of mouth) of the time were playing; and 2) I wanted to know what people were saying about the most popular Mac games — did their opinions differ from magazine reviewers? Were they swapping hints? What did they find frustrating or exciting about these games? What did they think of Mac versions of games initially released for other computer platforms? And what language were they using to describe the games?

I also had two other uses for the Usenet archives — namely, to identify more lesser-known games that got people talking and to help with fact checking. For shareware games, I could search for the first upload date or update release notes in a "binaries" newsgroup to confirm release date. In the case of Bolo, a shareware online multiplayer game that was leaked out early, I studied Usenet archives in detail to figure out a timeline of releases as well as the game's explosive word-of-mouth spread and, several years later, its anticlimactic demise. (Here's a thread in which some confused people excitedly discussed both Bolo and an Apple II game of the same name. Stuart Cheshire, the creator of Mac Bolo, shows up a little way down to set the record straight.)

When I was struggling to get to the colony in The Colony (an excruciatingly-difficult first-person shooter/adventure hybrid from 1988), I searched for cheats and the post below made me think to try the Colony Editor — a save file editor that allows you to increase your health, armour, power — and in the process I found maps and door codes and other hints.

Sometimes I could get names of or details about companies or individuals that I didn't previously know, or I could find the source of things that were referred to in ever-vaguer terms as the years went by. At one point I found a post from June 1988 that announced to the community that Duane Blehm had died and with his parents' blessing they were preparing to release his games (Stunt Copter, Zero Gravity, Cairo Shootout) into the public domain. (Near as I — and John Calhoun, who sent me the link — can tell, this is his grave; he was older than the rumours I read growing up in the 90s suggested.) 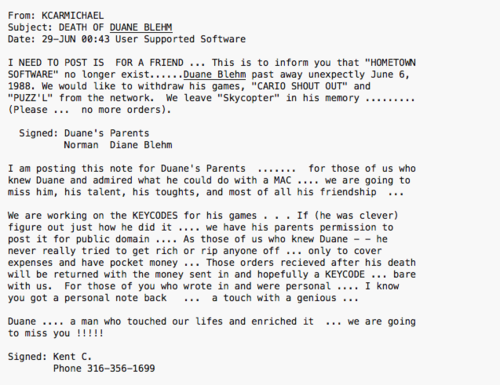 I was also able to get a little bit* of a look at the transition of the Mac gaming community from Usenet to the Web. In addition to providing quick answers to all the most common Mac games-related questions, Christina Schulman's comp.sys.mac.games FAQ acted as a bridge between these two worlds; it granted those who discovered Usenet through Yahoo or some other website an introduction to the Mac gaming newsgroups and helped newsgroup users find some of the key Web destinations for Mac games. (I can't seem to find the link right now, but a second document grew out of the FAQ that was just a huge list of weblinks to Mac game developers, publishers, fansites, news publications, and anything else relevant.)

*I say a little bit because of time constraints in light of the difficulty I had searching with Google Groups more so than because of incomplete archives; I should be able to look somewhat deeper as I do research for future Mac gaming history projects.
I also found that MacGUI's Apple II/Mac-focused Usenet archives had some things that weren't in the other archives, which complicated the research process but was a welcome addition. And I'll be talking more about them in the zines entry (whenever I get around to writing that), but I also must credit Usenet archives with informing me of the several sort-lived games and entertainment/educational software e-zines that predated Inside Mac Games.

We're on text proofing right now. What that means is that our designer Darren has completed a full text layout for the book, but he hasn't finished getting the images in. I'm going through checking stuff and trying to figure out how to cut a few lines here and there to meet space constraints. And in parallel we have a professional proofreader checking for formatting and spelling mistakes.

These first proofs will be fully checked by the 11th, then it's onto second and third proofs and then indexing. I'll go into all this in detail in a supporter-only post next week. (This one's public, which means you're free to share it.)

I also need to announce that the last day people can pledge to get their name in the book is September 17.

Some of you have seen it already, but here's the book's cover: 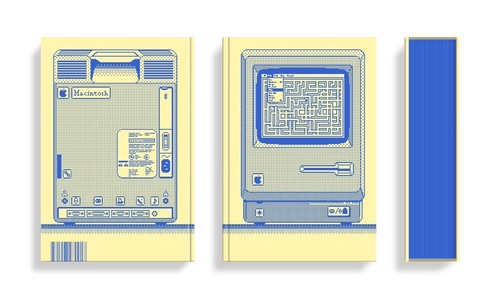 And as a final, unrelated note, I want to quickly mention that I've just launched a documentary-style podcast about video games and the video game industry, as they were in the past, and how they came to be the way they are today. It's called The Life & Times of Video Games. First episode is about the unsustainable price war that iPhone game developers found themselves in during the early days of the App Store. There'll be a couple of Mac gaming episodes later in the season. You can find out more at lifeandtimes.games.

So excited for this book! Love the cover, can't wait to see the final product!

Love the cover. Excited to get the full book!

This is a wonderful cover, and I very much appreciate the updates you've been giving.

Thanks for the update - looking forward to it.

Richard, not sure if this is useful to you at all, but I found a log from the AOL Mac gaming chat room by searching for my old screen name: http://www.spiderwebsoftware.com/misc/interviews/NETH_AOLchat.txt

You can probably find more by searching for more prominent screen names at the time, particularly mods whose screen names started with "AFL" or "AFC," like AFL Rod.

Thanks for the tip, Thomas! I've seen that particular chat log before, but I wasn't aware of the mod naming conventions -- so that'll definitely be a help with searching for more.