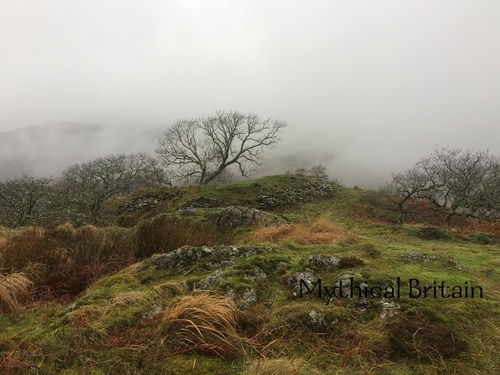 Britain is a land of myth and legend, at the centre of which the stories of King Arthur are amongst the most renowned. At Dinas Emrys in the mountains of North Wales, history and myth combine in a potent mixture to deliver one of the most important sites in the Arthurian canon.

Here, in this lonely, rain-sodden place, the British king Vortigern was told by the boy Merlin of two fighting dragons who were causing the collapse of this castle. Here too, the red dragon of Wales arose from its hidden lair...

Merlin and the legend of Dinas Emrys

The story of Dinas Emrys is where Welsh national identity and Arthurian legend blend in one heady mixture, with three key sources combining to light a fire which will forever burn among the ancient mountains..

In the Mabinogion we are told, in Llud and Llefelys (dated to the 12th/13th Centuries), that King Llud imprisoned two fighting dragons within the crag of Dinas Emrys. 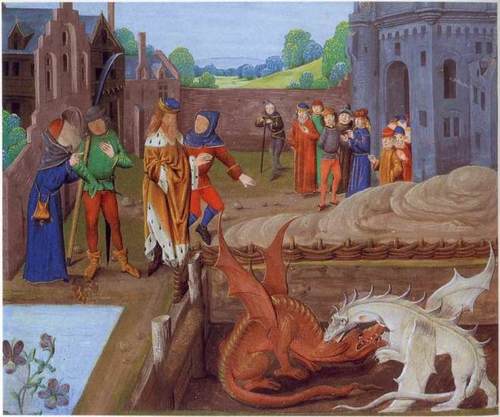 Above: mediaeval manuscript showing the legend of the dragons (courtesy Wikipedia commons)

In the ninth century Historia Britonum of Nennius, embellished by Geoffrey of Monmouth in his later (twelfth century)Historia Regnum Brittaniae, we also learn of the British king Vortigern who attempts to build a lofty stronghold at Dinas Emrys only for it to collapse continuously.

Now the story gets even richer. Vortigern is advised to find a boy born of a virgin whose sacrificial blood will be sufficient to stop the walls collapsing. Eventually, the boy is found at Caer Merddyn (Carmarthen) but, avoiding sacrifice, he tells Vortigern that the cause of the collapse is in fact two dragons – one red, one white, fighting in a hidden pool below the hill.

The red dragon is identified as the dragon of the ancient Britons; the white the invading Saxon forces. Eventually, it is prophesied, the red dragon will overcome the white.

The boy is identified as Ambrosius in Nennius but also as Merddyn Emrys in Geoffrey; Merlin Ambrosius. Here, in this isolated spot, one of the great names of the Arthurian canon appears. It is here too that the red dragon of Wales, with all its wondrous connotations, lives on still in pool and cave.

Irrespective of the dating of each of these stories, and how how much they rely on each other, Dinas Emrys remains a magical, mythical place.

For many years, Dinas Emrys was on private land and inaccessible to the visitor. Today, however, there is a well-marked path which takes visitors to the summit. Described by the sign post in the car park as a “strenuous” two mile walk, the trek to the castle is undemanding and well within the capabilities of any able bodied person. 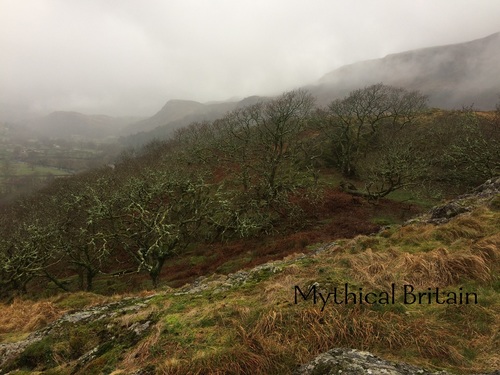 Walking towards the castle from below, it is easy to see why it would have been built here: it stands on an isolated knoll which commands the valley from both directions. It is built as a statement in the landscape, not unlike similar Welsh fortresses such as Dinas Bran, Dolwydellan, Dolabadarn and Castell-y-Bere.

The castle combines the rough-and-tumble fragmentary remains of an Iron Age hillfort and the foundations of a sqaure tower thought to have been built by Llewellyn Fawr (1173-1240) or in the later years of the reign of Owain Gwynedd (1137-70). 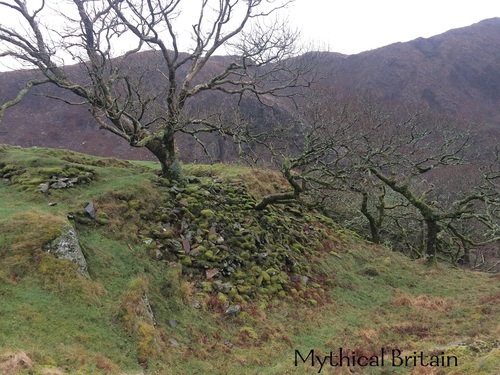 Architecturally, there is little to see: a few – and often indistinct - banks and ditches from the Iron Age and the remains of the tower. In the last few years, the tower has been excavated and consolidated and the pool below the tower has been cleared of debris – no doubt to embellish the site for visitors. From what I could see on my visit, the structures appear all to be all of dry stone wall construction.

It is hard to say whether the main tower was ever completed. Although the foundations are impressive, it is odd that so little survives beyond about six feet in height. Considering the isolated location – and comparing it with much more accessible sites such as Ewloe, or even the unrestored courtyard and tower at Dolwydellan – the lack of substantial remains above ground is singular indeed. 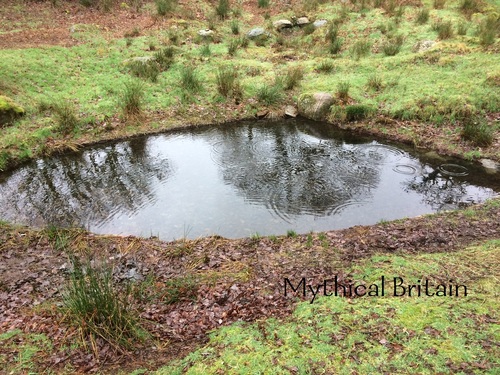 On a misty day, with Welsh mizzle and a gentle breeze, perhaps it is best that this is so. With gnarled trees dressed richly in lichens and with droplets rippling the pool below, there is surely no place in Wales, perhaps the whole of Britain, as evocative as this. No visitor centre required – it is a magical place and best left as such. Vortigern and Ambrosius are here in spirit as well as myth.

If you enjoy reading my translation of King Arthur's Death (the Alliterative Morte Arthure) and would like to read others in this series, my first book, a translation of the Sir Gawain and the Green Knight, was published by Unbound in 2018 which you can order through all good bookshops or from me. I am also now crowdfunding my next book with Unbound - a translation of the allliterative William and the Werewolf (William of Palerne), first commissioned by Humphrey de Bohun, Sixth Earl of Hereford, in c.1350. Again it will be richly illustrated with linocuts, and feature a detailed historical introduction, glossary and notes. Please do support it (and have your name printed as a patron in the back) - here

Great & informative post Michael! My wife & I spent a great couple of days visiting both Dolwydellan & Dolabadarn - during a January on a wintery, foggy Northern Welsh day. Perhaps we're just romantics (we're definitely castle aficionados) but it all felt very "Arthury" (sic) to us even without any obvious Arthurian connections. Looks like we'll have to go back for Dinas Emrys!

Hello Gregory - You must indeed go back there! It is best in winter I feel: the mist, the mizzle, and the mist-hackles also! I like the idea of Arthury. Who ever said the art of neologism is dead? Banners Advance! Michael.