DAISY BELLE supporters, you are brilliant – the novel has reached 74% of the target in just 4 weeks! Thank you for your support and enthusiasm, and please keep sharing the project with friends.

This week I want to introduce you to Annie Luker, pictured below. 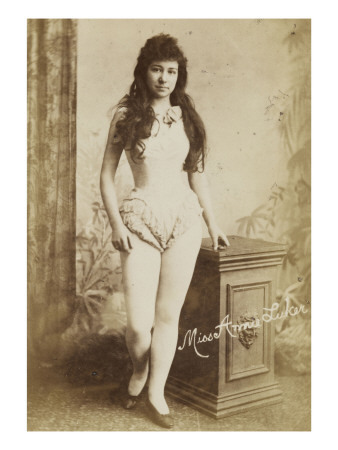 Victorian champion Agnes Beckwith was a swimmer more than a diver, but there were several famous female divers in the period. Diving was in its infancy in the 1890s and attracted huge crowds, particularly if the diver was a woman. The career of Annie Luker and her aquatic entertainments inspired an important part of my novel.

Annie was born Hagar Ann Luker in 1870, in the Thames-side market town of Abingdon, Oxfordshire. Her father was a swimming professor who trained Captain Webb for his Channel swim.

Annie started off as a river swimmer, and in the summer of 1892 she attempted to swim nearly 19 miles from Kew to Greenwich to ‘establish claim to the female championship of the world’. But after nearly five hours and with ‘no refreshment at all’, she had to be helped out on to the accompanying boat, exhausted.

Two years later however she was now ‘World Champion High Diver’, performing at the Royal Aquarium where she plunged 70 feet into a shallow tank. 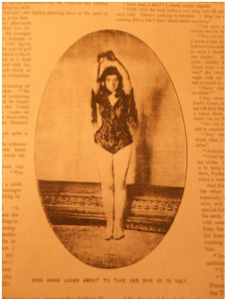 A reporter from the Pall Mall Gazette described her as ‘quiet, innocent-looking…the sort of girl one would expect to scream at a black beetle’. Yet she was thrilling London audiences on a nightly basis, and sharing the billing with a boxing kangaroo and a talking horse.

Her husband Frederick, an oyster merchant from Essex, was too afraid to watch her performance. ‘He never comes to see me,’ Annie told the press, ‘he couldn’t stand it. We live close by, and he waits for me at home.’

She stayed at the Royal Aquarium for six years, now a relatively wealthy professional lady swimmer. She also trained female divers at the Caledonian Road Baths in north London, but as yet I haven’t been able to confirm reports that she was later imprisoned as a suffragette.

I’m grateful to four modern day family members for providing me with further details on Annie’s life, as well as images and archive documents. I hope to do at least some of her amazing career justice.