Researching Between the Devil and the Deep: Behind the curtain to meet the doctor 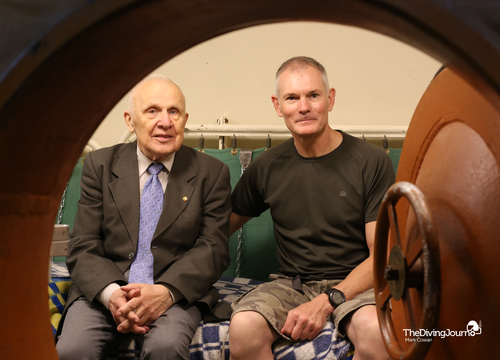 As we enter our second phase of the crowdfunding campaign I wanted to offer an insight into the research that has gone into the book. Over the coming days, I will upload a diary entry covering our most recent research trip to Russia. We were taken to some unique places, met and interviewed some amazing people, covered a fair few miles by train between Moscow and Russia's southern borderland close to the border with Chechnya, dived Blue Lake, explored abandoned ruins of mountain villages which revealed a painful history of persecution, and ate some pretty peculiar food. I hope you enjoy the insight into the research process and get a taste of the Russia we experienced. If you like it, please share with your friends on social media and ask them to support Between the Devil and the Deep. All the best, Mark.

Day One: Meeting The Doctor

We stood at the end of the road in an anonymous industrial estate way out on the outskirts of Moscow waiting for our interpreter to arrive.

A man in camouflaged combat trousers eyed us with curiosity from his corrugated sheet metal security shed. He appeared to be guarding a tired old factory slowly being reclaimed by nature.

Trucks trundled from neighbouring yards, kicking dust into the hot summer air which showed little mercy even at 10am.

Martin Robson and I were due to meet the elderly Russian doctor who had saved his life and legs in January 2012. Only this was not what I had imagined the Institute of Biomedical Problems would look like when we left the hotel that morning.

Our taxi driver had weaved through rush-hour traffic like a rally racer, checked the address scribbled on a piece of paper and left us here with a shrug.

I think we’re in the wrong place, I said.

Beyond the security barrier, a man with a white beard joined the guard and looked at us.

The man, we soon discovered, was Pavel Spirkov, a legend in Russian diving circles. Waving open the security barrier he ushered us behind the curtain to a place of old Soviet genius, hidden on the fringes of a place largely unaware of what had been achieved there.

Here scientists had conducted the most secret of diving experiments and devised a ‘Russian Way’—which, on the face of it, appeared radical—for treating the bends in patients who had been delayed getting treatment.

Dr. Gennady Mikhailovich Sokolov, the chief architect of the treatment and the country’s foremost expert on treating decompression sickness, was waiting for us at the building’s entrance. 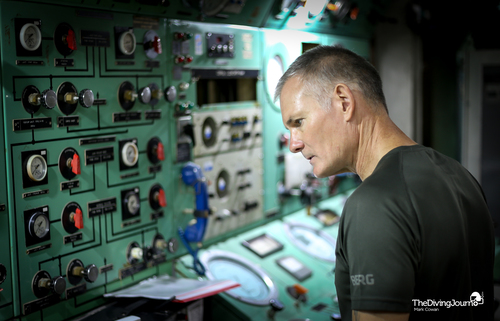 Dr. Sokolov is in many ways the unsung hero of Between the Devil and the Deep, the man who flew half-way across the country on the eve of his birthday to save someone he had never met.

While I was researching the book, he had graciously answered many questions over email and sent me his reports, but this was the first time I’d actually met him. It was also the first time Martin had seen him in six years.

Their embrace said all you needed to know about their relationship, two men bound together by an intense experience.

Finally joined by our interpreter, we followed Dr. Sokolov into the building and pulled out our identification papers for the woman seated in the security booth.

It’s okay, he said to her, they’re with me. She nodded and he led us into his realm of deep diving research.

At the heart of the Institute’s deep diving facility, we found the GVK-250 recompression chamber. When first introduced in the early days of diving, recompression chambers were nicknamed iron doctors. Wrapped in an orange tarpaulin, the GVK-250 appeared to grow from iron girders beneath the floorboards. Pipes and hoses protruded from the three-door chamber like it was wired to the very building itself.

The chamber was some piece of equipment, Pavel Spirkov told us. The GVK-250 can simulate dives to 250 metres to treat those with complex injuries. It has been used to test the effects on the body at a cellular and tissue level of breathing gas mixtures under high pressures. Run from an imposing control panel of valves, gauges and dials, the chamber was also used to develop breathing mixes of oxygen-nitrogen-argon for deep saturation dives. 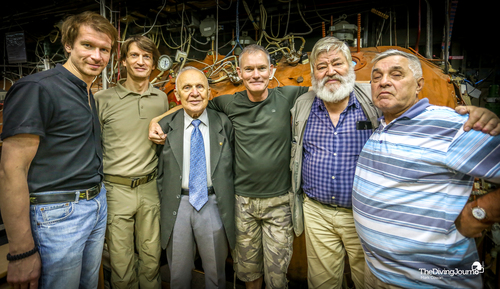 Guided from room to room we learned our hosts were as rooted to the building as the chamber. Posters detailing their achievements lined the walls, images changing from black and white to colour, showing a lifetime of work.

After the tour, Dr. Sokolov relived tales of diving research during the Cold War, revealing achievements that went unseen and unreported in the West.

In his eighties now, he is the most self-effacing of men and the last thing he’d probably want is a tribute to his brilliance. There was a mischievous glint in his eye and a playful smile as he talked through some of his cases: of the time he swiped a sick diver from a hospital in Algiers so he could treat him in a chamber on board his ship; the time he saw a man, who was lying helpless on a stretcher with a weak pulse and shallow breathing, practically reborn when he reached 70 metres of pressure; of the time he suffered a bend and treated himself, the story that forms the book’s prologue.

He also added a tangible emotion to the decisions he made while treating Robson, his fears for Martin's life as the rescue mission was being pulled together, concerns when the chamber sprung a leak, and of the moment he knew his treatment had worked.

Soon our time was up; we'd see the doctor again later in the trip and we all toasted a successful day with another glass of vodka.

Martin and Dr.Sokolov shared a private word together, then we headed out, past the security guard in camouflaged trousers. The security barrier lowered behind us and we were back in the anonymous industrial estate where trucks trundled by kicking dust into the hot summer air.