Lost to the bends and lost in the edit, the story of Walter Trapnell shared in thanks for supporting us 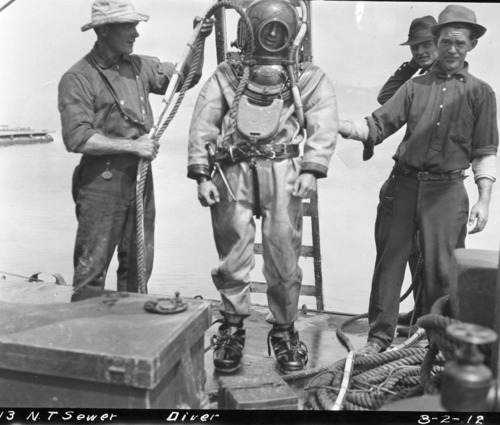 Writers, as the advice goes, must be prepared to “kill your darlings” in the edit, cutting the unnecessary scenes, extraneous details and excessive back story to maintain the pace of their work. For non-fiction authors those darlings can be significant, unknown or long-forgotten stories they have worked hard to dig out. The following story is one such darling.

While the story of Walter Trapnell's death, more than one hundred years ago, has not made the book, I don't think it should be left to languish, untold, on my hard drive. His loss helped John Scott Haldane, the father of safe diving procedures, cement his theories on stage decompression. As divers, I think we owe him a debt of gratitude.

I want to share the lost pages (I think of them like a bonus deleted scene on the DVD of your favourite movie) as a thanks to you all for supporting Between the Devil and the Deep. You have helped Martin and I beat our publisher’s crowdfunding expectations in the first two weeks. Cheers, Mark.

WALTER TRAPNELL FELT THE PAIN sweep his legs, nothing too persistent, and the doctors next to his makeshift bed on the deck of HMS Spanker became worried. He’d been down underwater and under pressure longer than any other diver on record, reports would later say, and no one quite knew what to expect.

They all figured Trapnell was suffering from caisson disease. His fellow salvage divers had been around diving long enough to have heard the stories men told of pain like nails being driven into their ears as they descended, of noses haemorrhaging, of bad air in their helmets that reeked of oil and pummelled them, a fist hammering inside their head, and of the infernal illness that niggled at their joints when they surfaced and could take a man without warning. Yet Trapnell was showing neither the signs of paralysis nor any other symptom common with the affliction.

More than five hours had passed since he’d first become trapped underwater, twenty-five fathoms down, while inspecting the wreck of Torpedo Boat 99; five hours since his air hose snagged on a davit high above his head, and his breast rope twisted on deck gear; five hours since Trapnell had been tied to the wreck just as he was about to ascend. He was only meant to be on the bottom for twenty minutes.

A week earlier, the forty-eight year old had volunteered to join the operation to salvage the torpedo boat, lost four miles off Berry Head, in Torbay, UK. For safety, the six men had been diving in twenty-minute stretches, spending an extra thirty-two minutes decompressing in stages on their way up, as laid out by John Scott Haldane in his groundbreaking Table I: Stoppages during the ascent of a diver after ordinary limits of time from the surface. No one had suffered any problems. The divers had taken a few days walking the seabed before they found the wreck on the seabed in forty-six metres of water. Trapnell had been a dockyard diver for more than ten years, but that was deep, even for him.

Dressed in the hard hat gear that every schoolboy associated with diving, Trapnell had gone down as ordered one Friday evening in July 1907 to inspect the propellor shaft. It was dark on the bottom, visibility was down to three metres and the tide was running. He moved along the side of the wreck, trailing his air hose and lifeline behind him. That’s when he got stuck, his air line going off in one direction, his breast rope in another.

His dive tender, Sydney Leverett dressed quickly, donned his tinned copper helmet and followed a rope from the surface to the propellor shaft. On the bottom, Leverett took hold of Trapnell’s hand and his grip said it all: I won’t desert you, chum. Working against the tide, Leverett moved to disentangle the lines. The task was exhausting. He was nearly done for, blood poured form his nose and it would have been easier to quit. He almost did. He seriously contemplated it, but knew he was Trapnell’s only chance. By the time Trapnell was free he had been on the bottom, under pressure, for almost two-and-a-half-hours.

Up on deck, the head of the diving operation, Lt Guybon Damant, consulted with Staff Surgeon Oswald Rees on a decompression plan. The only reference they had was Haldane’s Table II: Stoppages during the ascent of a diver after delay beyond the ordinary limits of time from the surface. The  two men thought about the time needed to decompress Trapnell. They thought about the cold water, thought about the strong tides and his exhaustion, thought about his weight, Trapnell was a man of heavy build, and believed two-and-a-half-hours would be long enough.

Decompressing, he hung like a dead weight on the end of a line talking constantly until he the last few minutes when he complained of dizzy spells. He was hauled to the surface just after midnight, exhausted and unable to climb the ladders to the deck of the gun-boat. The tenders undressed him and applied hot bottles to his skin. He hardly spoke and was only half conscious.

The pain in his legs was a concern, but that soon subsided and a decision was made to transfer him to hospital. The move made him worse. Witnesses said he became restless and delirious. He was given oxygen, but was unconscious when his wife, Rosina, arrived at the hospital that evening. Twenty-four hours after surfacing Trapnell suffered cardiac failure and died suddenly.

During the post-mortem examination conducted twelve hours later, Haldane found bubbles in the right side of Trapnell’s heart, his veins, liver and intestines. Scattered bubbles were found in the coronary arteries. The layer of fat around his abdomen was distended with small bubbles. There was no reason to doubt the bubbles were responsible for the diver’s death, Haldane wrote. The findings leant further weight to his theory that parts of the human body, such as fat, were slow to take on nitrogen and equally slow to off-gas.

Haldane was so certain in the marked superiority of his methods he stated the risks of caisson’s disease would practically disappear if his procedures were rigorously applied. As far as the Admiralty was concerned compressed air illness had been identified and labelled, and people mistakenly believed they had finally conquered the disease. It might not have occurred to the Lords of the Admiralty that the disease was understood only in the simplest of terms when, little more than a year after Trapnell’s death, they issued an extraordinary communiqué to the fleet which the press boiled down to the simple headline: Fat Men Banned. No man with even a “tendency to fat” was to be employed as a seaman or artificer diver, the circular stated, and only men of the sparest habit were to be employed for dives deeper than twenty fathoms. The reason, newspapers stated, was because it was believed stout men were more susceptible to the disease, whilst the thinner the man the nearer to immunity he was.

The Devon and Exeter Gazette. “The Diving Accident off Torbay,” July 17, 1907