Birthdays after birth trauma are funny things. They’re times of joy and celebration of a much-loved child, and yet they’re also ‘crappiversaries’ – a concise if rather twee name for the anniversary of a traumatic event. I’m not sure why crappiversaries have to be a Thing, and yet somehow they are. You can ignore them, but they insist. In a way, it’s like the events of a year ago, or however many years ago, are still happening, in parallel, and they’re trying to pull you back.

And then there’s the guilt. Arthur will be five in a few days, and his birthday is his birthday, not my birth trauma anniversary. I feel that struggling with it makes me self-obsessed and insufficiently thankful for the fact that we are both alive and well. I also know that this is crap.

I tried so hard to look forward to Arthur’s first birthday. Things were looking up by then: I was more sane and more present, generally, than I had been for a year before. I was beginning to enjoy things again, to see beauty around me. It was like reawakening after a long sleep. The birth was still was a series of patchy, muddled memories – moments more than a narrative. I had cobbled together a story of sorts, but it was incomplete and most days it felt like it had happened to someone else. When I looked back on the previous year, it was with some shock – how dark and odd it was, how little I had understood of where I was and how I felt.

With twinges of sadness, I was also saying goodbye to my baby and hello to my toddler. I loved watching him learn something new every day: a new word – “More!” –; or the ability to sing a recognisable tune; or the discovery that if he pulled his Percy train backward, it would then scoot forward. I did a wardrobe changeover and found that all the clothes in a bag marked “HUGE” for the dim and distant future now fit. I held them up in astonishment against the clothes which went into the wardrobe a few months before. Wonder and loss all bound up together.

I was determined that Arthur’s first birthday would be this wonderful celebration of the little boy I loved late but loved utterly, and so - with dread in the pit of my stomach - I planned a big party. It didn’t matter that he wouldn’t remember it. I filled the house with excellent people. My friend Emma made a stupendous Gruffalo cake. This was going to be fun, damn it. 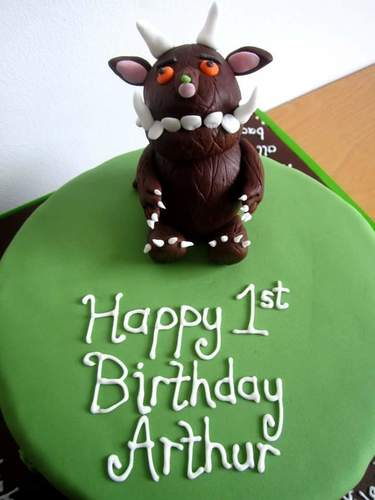 It wasn’t fun. Not really.

The flashbacks, the nightmares, the vague but all-consuming sense of panic – everything which had been gently receding – started to flood back in as Arthur’s birthday drew closer. I was OK until February 16th, the day I went into labour. That afternoon, I had a sort of flashback marathon – a series of them, one after the other, in rapid succession. Some of the memories were new: I’d had no idea of those events until that day. I was overwhelmed. Somehow we got through it.

I tried so hard to ignore Arthur’s second birthday. I didn’t plan a party this time, just invited close family over for tea and cake. Every time a thought popped up - “This time two years ago…” - I would mentally slam the door on it.

That year the nightmares started on February 10th, along with a perpetual gnawing unease. I am usually a fairly anxious person but was in overdrive from then on, my body a siren: “EMERGENCY! EMERGENCY!” all the time. I would behave as if ridiculous things, trivial things, were emergencies because at least it made sense, then, that my muscles were tense and I felt sick and I could hear my heart banging away. I was ridiculous, and, understandably, irritated everyone around me. Their irritation became the new emergency. I didn’t recall feeling afraid or anxious during the labour, or the birth. In fact, I still don’t really remember any emotions at all. It’s just snapshots, static frames, like a series of paintings along a wall.

On the 12th, I was on a bus, not thinking about anything much, when suddenly there was an intense stabbing pain in the back of my left hand. I looked down and there was a cannula in my hand. I was on the bus and it was there. It hadn’t been there before, but I could see it and I could feel it. I froze and stared at it in horror. My hand was horribly bruised. The cannula was there for about fifteen minutes, as the bus crawled through the traffic on the high street, and then I blinked and it was gone.

I had the same hallucination again that evening, as I was getting Arthur off to sleep, and then just the pain in my hand a few times after that. It was freaky as hell.

The birthday came and went. Then a photo of me came up on Facebook – “two years ago today!” – I looked grey, swollen, and completely dead behind the eyes, with a tiny jaundiced baby held up to my chest. The second birthday had been harder than the first, and that scared me to death: it was supposed to get easier, wasn’t it? Time’s a healer and all that. What if it just got worse and worse every year?

It didn’t. It hasn’t. After the second birthday, each one has been easier than the last.

If this resonates with you, I want you to know that it will get easier. It will. And there’s support available: please go and check out The Birth Trauma Association. Their Facebook group was a lifesaver for me. And I’m not any kind of expert but do contact me if you would like to. You can also use the #pndchat hashtag on Twitter or join #PNDHour on Wednesdays 8pm. Don’t carry this alone.

It's completely understandable to find the time around your child's birthday difficult. It doesn't mean you don't adore and celebrate them. It's not making their day all about you. Be kind to yourself for their sake and yours.

Five years on, I’m OK. I do keep thinking “This time five years ago…” but I’m trying to strike a balance in allowing those thoughts to drift around whilst not fixating on them. Last week I was speaking on a perinatal mental health course for medical professionals, one I do twice a year, and talking about Complex PTSD: in many ways, this particular talk feels like one of the most important things I do, but it also completely fucks me sideways every damn time. It’s totally worth it but the emotional hangover is grim, and the timing, on this occasion, not great. But I’m over the worst of the tiredness and general fragility now, and I’m trying to work out how I’m going to make a Splatoon 2 cake...

The book, by the way, is 44% funded – thank you so much and welcome to all the new supporters. If you haven’t pledged yet, you can do so via the big blue ‘Pledge’ button on this site and you will get a fancy copy of the book with your name in a list of patrons at the back. You’ll also be helping to make this book a reality. Please do share the link and/or this post around, especially with anyone you think might benefit from some Real Talk around birth trauma and maternal mental health.