By Mathew Clayton
Books by my bed | 8 minute read
A pile of books with a heap of stories behind them, from obsessions with the 18th century to memories of shinnying up lampposts.

The Diary of Thomas Turner edited by David Vaisey

In my twenties I worked at the Guardian and used to help publish their annual collection of journalism, the Bedside Guardian. ‘Bedside’ books have been staple of the publishing industry since the start of the twentieth century, they are usually anthologies based around a single subject like golf or poetry and are aimed at the Christmas gift market. They appeal to publishers as they can be put together hastily and cheaply. They usually rely on out of copyright material with no permission fees, and the compiler can be an in-house editor rather than a potentially expensive author.

Last year I found a copy of A Sussex Bedside in the local library. Published in the 1940s by a long forgotten publisher, The Arundel Press, it included extracts from an eighteenth-century diary by a shopkeeper called Thomas Turner. His diary has been a growing obsession and many of the books by my bed relate to it. This year I am writing a monthly column about Turner for caughtbytheriver.net and so have been trying to improve my knowledge of the eighteenth century.

Turner lived in a village a few miles away from me, his life was pretty ordinary except for one odd thing – his group of friends are constantly, and I mean constantly, staying up all night partying or as Turner calls it ‘rough horseplay’. And although he lives in a village, he is always travelling, he reads a lot and is interested in the world around him. Various extracts from the diary have been published over the years, most comprehensively by the Oxford University Press in 1985, but even this edition includes just a tenth of Turner’s one million words.

I received a reply telling me that the day before I emailed they had stopped providing microfilm copying services. Oh such bitter disappointment

Yale University bought the original manuscript in the 1940s and it has languished there ever since. They converted it to microfilm in the 1970s and last week I ordered a copy. Today, I received a polite reply telling me that the day before I emailed they had stopped providing microfilm copying services. Oh such bitter disappointment!

Lewes is a county town in Sussex that lies a few miles from where Thomas Tuner lived. These books were written and published by a local historian and are completely wonderful. It is rare to find someone self-publishing to such a high standard. I particularly like the cover copy that Brent wrote about himself: ‘He embraced early retirement in 1983, and has immersed himself in the harmless drudgery of antiquarian study. Alongside a few erudite articles, Victorian Lewes appeared in 1980, Historic Lewes in 1985, and Georgian Lewes in 1993. Pre-Georgian Lewes has dogged his latest decade’. The strange thing about local history is that although your book will never trouble the bestseller list, if it is done really well it will be read by people, specifically those involved in ‘harmless drudgery of antiquarian study’, not just for decades, but maybe even for centuries.

The Secret History of Georgian London: How the Wages of Sin Shaped the Capital by Dan Cruickshank

English Society in the 18th Century by Roy Porter

These first three of these books were already on my shelves. I thought each of them might teach me something about eighteenth-century life, but they were all a bit of a let down. Schama’s book gave me some general background but not enough detail. Cruickshank’s book was a red herring. It is a history of Georgian prostitution that the publishers have tried to disguise as something more palatable. Folk Song in England is a 764-page doorstopper that manages to be both deathly boring and deeply fascinating – often in the same paragraph. Much time is spent on debating what constitutes a folk song. It reminds me of another favourite book, Colin Tudge’s Secret History of Trees, in which the author begins with a very lengthy debate about what exactly is a tree. After the disappointment of these three books I found English Society in the 18th Century by Roy Porter on Amazon. It finally provided what I was after.

A fine day in Hurstpierpoint by Thomas Marchant

I was giving a talk about Thomas Turner at a festival over the summer and afterwards I was chatting to the author Ian Marchant. I was amazed to discover one of his ancestors had written an eighteenth-century rural Sussex diary. A typical entry reads, ‘A dry forenoon, very wet after. Old Dick Banks and John Gun hedg’d ’till noon. John Gun thrasht afer.’ There are lots of similar descriptions of farm work but he never stays up all night playing brag and dancing round wearing his wife’s petticoats. It has been self-published by a local history group, but they have just transcribed the diary; there is no introduction, maps, footnotes, appendix or index. It is a lesson in how those overlooked aspects of a book can bring the material to life. One thing he has in common with Thomas Turner is that they both use the word ‘forenoon’ instead of morning. Much to my son Laurie’s annoyance, I have now adopted this practice.

I realised that I could up the pace… If I read all dialogue plus the first and last sentence from each paragraph, very little meaning is lost

I have been reading this to Laurie at bedtime. We are half-way through the third book. This has been a very enjoyable experience but Ursula does go on a bit. I realised about half way through the second book that I could up the pace by doing a little cutting. If I read all dialogue plus the first and last sentence from each paragraph, very little meaning is lost. We are now racing through. 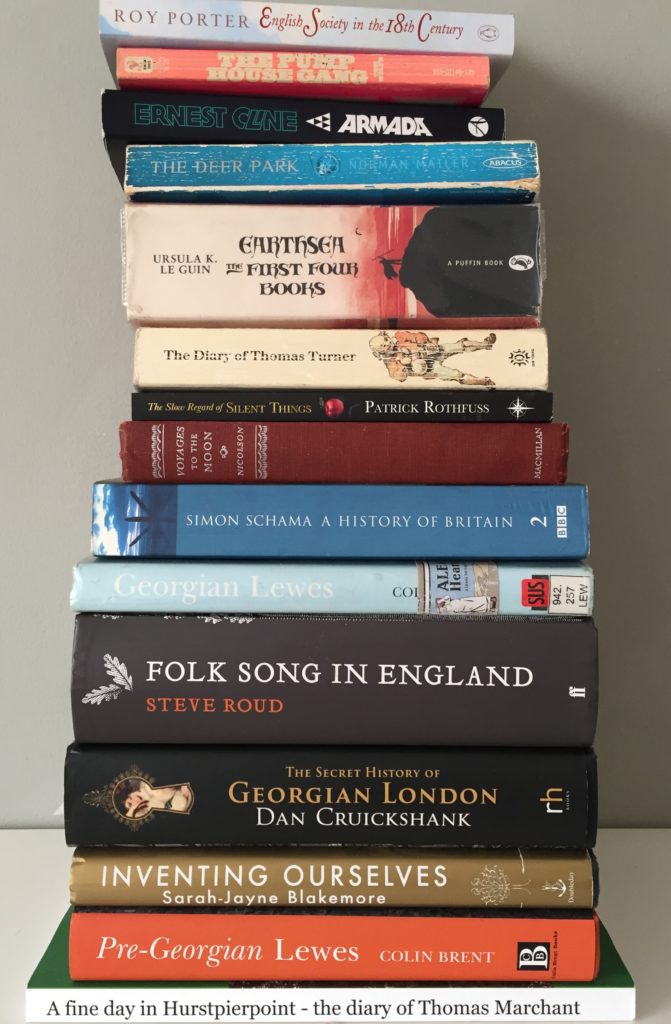 This is another book I read to my son. His favourite genre of music is his own invented category, ‘action-packed’ (the ultimate action-packed track being Motorhead’s ‘Ace of Spades’). This book promised to be the literary equivalent of Ace of Spades. The plot is neat and simple; space invaders from a computer game have attacked earth. Can the hero use the skills he learned in an arcade (that everyone said were a waste of time) to save the world? It is a book for adults and the content is a little dodgy in places. I tried to skip anything iffy as we went along. I slipped up a couple of times but overall it worked. But then I made a mistake. I left the book around the house and he just read the whole thing again anyway.

The Slow Regard of Silent Things by Patrick Rothfuss

Voyages to the Moon by Dr Marjorie Hope Nicolson

I have read neither of these books. I got given the Rothfuss as a present this Christmas. It was delivered through Amazon and I still don’t know which kindly relative sent it to me. Voyages to the Moon was a recommendation from Adam Rowe’s newsletter. Published in 1948, it is a history of lunar travel in literature. I am always on the lookout for space-themed books we can put on Unbound. For some reason, space-related topics are crowdfunding gold. I think I haven’t picked it up because I don’t want to be thinking about work just before I go to sleep.

This is a book about how teenage brains develop. My wife has told me to read it

The Deer Park by Norman Mailer

I have always preferred American literature to British; when I was growing up we had Ian McEwan and Julian Barnes while they had Brett Easton-Ellis and Jay McInerney – a lot cooler. I haven’t started reading The Deer Park yet but I will. I came to it via Mailer’s Advertisements for Myself  which included extracts from differently edited versions of the novel. Advertisements is a collection of essays, commentaries, interviews and lists. It is an in-between book put together – I presume – to plug a gap by his publishers before the next novel. Essentially it is just an anthology but Mailer is very playful with the format. It would not be that much of a stretch to describe it as a Bedside book of Norman Mailer.

I am a late convert to Wolfe. Over the years I tried reading Bonfire of the Vanities multiple times and always hated it. But then last year I tried again and loved it. However, I fear this collection of journalism has not dated so well: The bits I have read seem very mannered.

I buy lots of books at charity shops. I got the Wolfe at the Oxfam bookshop in Kensington Gardens in Brighton. I think of Kensington Gardens, a short pedestrianised street in the North Laine, as the heart of Brighton. In addition to Oxfam there used to be two other decent bookshops there – both now sadly shut. In the 1990s my girlfriend lived above one of them. One night she lost her keys and I climbed up a lamppost and broke in through an unlocked window. I tell this story to my children every time we walk past. I have now told them it approximately 3,000 times. It is yet to register a flicker of interest.

Inventing Ourselves by Sarah Jayne Blakemore

This is a book about how teenage brains develop. My wife has told me to read it. I am not sure whether it was intended to give insight into my own brain or that of our kids. 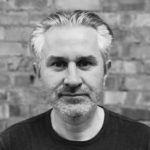 Mathew Clayton is head of publishing at Unbound. As well as overseeing the commissioning department, he runs The Free University of Glastonbury, and is also a sidekick on Unbound’s Backlisted podcast.
@Mathew__Clayton
Tags :
Books by my bed bedtime reading