Books by my bedside: rebel reading

For as long as I can remember, there have always been books on my bedside. Back in the day it was more about the aesthetics: upright, with colourful spines arranged in the order of the colours of the rainbow. Nowadays, I am less fussy about appearances. My bedside books are in a single pile in a random order in a sort of controlled chaos.

I have a mixture of books: ones I am currently reading; ones I am rereading because I either A) loved them so much, or B) wasn’t paying attention the first time around; and ones I have yet to read. Some are proofs from my workplace or other publishers, and some are fresh from bookshops with the receipt doubling as a bookmark to save paper – classic millennial.

When I was four years old, I kept a giant atlas by my bed and made my mother quiz me on capital cities. It was the only book I read enthusiastically, and I thought it was the only book I would ever need. I didn’t care for age-appropriate books like The Very Hungry Caterpillar or the Elmer Elephant series because I knew they weren’t real. During reception reading time, I would deliberately act up until my teacher had no choice but to leave me in a quiet corner to read the books of my choice. I wasn’t a problem child per se, just curious about the world, what it looked like and how it worked. And when I couldn’t get answers from adults, I turned to the big pages in my atlas and was transported to every corner and crevice of the living, breathing world within seconds.

By the time I was ten, I could afford to buy my own books instead of borrowing from the local library. I moved away from non-fiction and became fixated on the world of Jacqueline Wilson. Up until that point, it hadn’t occurred to me that characters could be little girls like me, going through regular issues. Her books were an escape and I treated them as such, hiding away in corners and reading for hours until my parents came looking for me. I started in order and read everything from Glubbslyme to Candyfloss – twenty-two books and sixteen years worth of work in the space of a few months.

These books meant a great deal to me because they were funny, brash and had female characters who were not just there for decoration

I truly fell in love with fiction for the first time. However, my teachers grew concerned, as did my mother, who tried to prise me from ‘girly books’ and onto the more serious, respectable stuff like Lorna Doone, David Copperfield and Moby Dick. I gave Lorna a chance because the cover was a pretty fuchsia pink, and the whale book, because anything with the word ‘dick’ in it was always going to be hilarious to a ten-year-old. Even though I didn’t have a clue what any of these books were about, I found them incredibly useful to hide my new Jacqueline Wilson books in as I pretended to read them.

The Wilson books lined my bedroom bay window in order of publication, but they would gather dust within days so I had no choice but to move them to the family bookshelf, where they remained for over a decade. I was possessive over my books and reluctant to place them on a shared shelf next to unloved French dictionaries and tea-stained recipe books from the early 1990s.

I soon moved on to keeping magazines like Bliss, Sugar and Company by my bedside and kept any evidence of my love of book-reading out of sight. I felt like I was living two different lives during my early teens because I loved women’s magazines (and the freebies that came with them), but also could not wait to curl up somewhere and read action/spy books like the Alex Rider and CHERUB series. Anthony Horowitz and Robert Muchamore had me hooked on their young, flawed but brave characters.

Reading became tedious and I no longer found joy in fiction, so I swiftly moved on to poetry, thanks to the rise of social media ‘micro poets’

In my Surrey all-girls secondary school, these books were out of reach, literally. The action books were placed on top of a shelf and students had to ask permission from the librarian if they wished to borrow them.

But before my plan to steal them had fully formed in my head (I would have returned them, promise…), my sister had convinced our mother to by us the CHERUB series for us to share, thus unknowingly saving me from a life of crime.

These books meant a great deal to me because they were funny, brash and had female characters who were not just there for decoration.

In my early twenties, something shifted in my brain, a sort of tectonic shift that made me realise that I was in a book-reading bubble. Reading became tedious and I no longer found joy in fiction, so I swiftly moved on to poetry for the first time, thanks to the rise of social media ‘micro poets’ like Rupi Kaur, Yrsa Daley-Ward, Lang Leav and Nayyirah Waheed. It became clear to me that I wasn’t actually bored of reading at all, just bored of the writers and their stale characters that I could no longer relate to or even understand.

My current bedside pile is something I have been calling a Tsundoku of ‘new classics’. Tsundoku, the Japanese word that describes the practice of leaving books unread after buying them, usually in piles, and ‘new classics’, referring to books that have the potential to become stars on bookshelves for years to come.

Contrary to popular belief, not every writer of colour or woman centres their work on race, gender and/or feminism… that is what every writer wants – creative freedom

A number of these works were crowdfunded or self-published (How to Come Alive Again, Don’t Hold My Head Down, Nasty Women and Milk and Honey); eight are by Black and/or Asian writers and they are all by women (with the exception of the Korean language practice book that I am slowly making my way through).

The spines of my bedside books that once only showed English names now show African and Asian ones. Names that do not roll off the Western tongue with conviction and clarity. Names like Oyinkan, Afua, Nafissa, Chidera Eggerue, Otegha Uwagba, Rupi Kaur, Lang Leav and Yomi Adegoke.

Even as a type out these names, red squiggly lines appear underneath each of them because the computer has assumed I have made a mistake. They are not recognised as ‘the norm’ and have disrupted both this piece of writing and the publishing world in general.

Within their works these authors write their truths, whether it’s how to have a fulfilling career as a working woman (Otegha Uwagba’s Little Black Book), Black British identity (Slay in Your Lane and Brit(ish)) and micro poetry (Lang Leav and Rupi Kaur). What a Time to Be Alone was the literary punch in the face I needed in my life, and I go back to Chidera’s wise words all the time. Contrary to popular belief, not every writer of colour or woman centres their work on race, gender and/or feminism. They have been given the creative freedom to create the art they want, and it is evident in the brilliant writing across the genres. They did not appear out of thin air as afterthoughts or by-products of similar books by better-known writers. At the end of the day, that is what every writer wants – creative freedom and opportunity.

I am excited to read comedy-thriller My Sister, the Serial Killer and illustrated astronomy book What We See in the Stars soon too.

Will I ever conquer my Tsundoku pile? Probably not. I have bigger beasts to slay and this one is more of a mini ecosystem that needs replenishing with new books every few months or so.

It is only now, with the age of twenty-five just around the corner, that I have come to terms with who I am as a person and as a reader.

Rebel readers remain unphased, unapologetic and completely unbothered by snobby bookish types, who are yet to plunge into new territories and read the wonderful unknown. They are constantly curious and are able to burst their own bubble of ignorance if needed. For me, that is the purest act of rebellion. 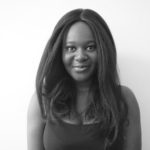 Joelle Owusu is a British-Ghanaian writer living in London. In 2016, she graduated from the University of Aberdeen with a BSc in Petroleum Geology and now works as a junior editor at Unbound. Her work has appeared in Nasty Women (404ink, 2017), Mind Matters: Part II (Forward Poetry, 2017), Inspirational Idols (Forward Poetry, 2016).
@Joelle_o
Tags :
Books by my bed