By Margaret Hickey
Q&A | 7 minute read
Unbound author, Margaret Hickey on writing in the peace and quiet of rural Ireland, her teen crush for 'the dashing Mr Rochester' and the publication of the paperback version of her latest book Ireland's Green Larder

The River Shannon flows right beside my house in rural County Galway. When I moved here from central London, my neighbour Micho told me the road in front – the length of a field away – was fierce busy. Hmm. It depends what you’re used to. At peak times as many as four cars a minute can drive by. If a plane flies over, people almost come out of their houses to stare, whereas my flat in west London was situated right below the Heathrow flight path. The only sounds I hear nowadays are cows munching and Micho’s donkey occasionally braying. I don’t need to book into a writer’s retreat – I live in one.

Ooh, the book question is really difficult to answer. I hope it’s not considered cheating if I say that I recently read two on the trot and each is marvellous.  The first is Half a Yellow Sun by Chimamanda Ngozi Adichie and the second is The Narrow Road to the Deep North by Richard Flanagan. Often, when you’ve read a really impressive book, you are dissatisfied with the next you pick up. But each of these two, set in different periods and on different continents, examines deeply and truthfully our human capacity for hope and endurance and love.

As for the theatre, I’m lucky enough to live near Galway city, home to the world-class Druid Theatre Company, directed by the brilliant Garry Hynes. She seems never to put a foot wrong. I was recently taken to her production of Richard III, with a very physical and original interpretation of the role by a regular favourite actor in Druid – Aaron Monaghan.

I thank God that there was a library nearby when I was a child, because I was a voracious reader and needed a steady stream of books. I read, as did all the children of my era, Enid Blyton. The Magic Faraway Tree was a favourite, as well as the books featuring the Five Findouters and Dog. But the book that really hit me between the eyes was Jane Eyre. I empathised with Jane, poor and plain as she was, and I was breathless at the thought of dashing Mr Rochester. This account of the stirrings of erotic passion was just the thing for a teenage girl. I knew passages by heart, and if there is a perfect time to read that book (and I believe there are always times in your development when certain books will have the greatest impact) then your mid-teens is the ideal time to read Jane Eyre.

I remember telling a teacher at my primary school that I wanted to be an authoress, a word that makes me cringe, now. I loved reading poetry and set myself the task of learning certain poems by heart – ‘Ode to a Nightingale’ and ‘Daffodils’ were two I recall. My first attempts at writing fiction were highly derivative, featuring excruciating heroines such as schoolgirls Fiona and Elspeth. But I can’t name a single book that got me writing – it was more the fact that I had to write – there was nothing more worthwhile in life.

I don’t need to book into a writer’s retreat – I live in one.

Nobody could say I’m short of paper. I’m a great recycler, plus I have some very beautiful notebooks brought back from India, Italy and almost every museum or gallery shop I enter. Despite that, I almost always find myself writing rough drafts of poems on the backs of envelopes or in the margins of newspapers lying around.

That aside, I write on my laptop, but regret the fact that being able to delete so easily means that you can’t go back to see what was the word or phrase you’d originally written. Sometimes what you wrote first time round is better than the ‘improvement’ you made later.

I most certainly do re-read books, because what you bring to the book as a reader changes as you grow and have new experiences. On the other hand, there’s always the danger of picking up a well-loved book and being disappointed on a second visit. I have no compunction in putting down a book if it isn’t up to snuff. I adore Flann O’Brien, but a recent re-reading of The Dalkey Archive was not a success. At Swim-Two-Birds is, however, quite wonderful.

Well, Becky Sharp is both a heroine and a villain, and Vanity Fair is a book I love. Count Alexei Karenin, husband of Anna, is not a villain in the conventional sense, and Tolstoy is too much a master to paint any of his characters in black and white. Nevertheless, Karenin’s chilly pride repels me. Brenda in Waugh’s A Handful of Dust is hardly a villain, but she’s pretty despicable.

I love Leopold Bloom, warm and muddled and human, although he’s hardly a hero – more a protagonist. I suppose that Dorothea Brooke, wise and kind and honourable, is a heroine.  Maybe Don Quixote should count as the ultimate hero, as he is brave and driven by a noble passion. If the second book hadn’t muddied the waters, I should confidently name To Kill a Mockingbird’s Atticus Finch. (And I can’t help but picture Gregory Peck when I write that name!)

I can’t name a single book that got me writing – it was more the fact that I had to write – there was nothing more worthwhile in life.

I mentioned above how important the library was to me when I was growing up and I am a passionate believer in giving free access to books to all who wish to read. Here in Ireland, unlike in parts of the UK, there has been no pressure to shut down something as seemingly dispensable as a library and I pray there never will be. Through the pages of a book, one can meet minds from all over the globe and from every age. No matter how impoverished one’s background – culturally as well as monetarily – books enrich us. I don’t visit my local library as often as I used to because the bookshelves in my house are crammed, crammed, crammed with books begging to be read. But I call in regularly, nonetheless, and borrow books with gratitude.

I don’t feel the need to lie, but I’m ashamed of not having read The Adventures of Huckleberry Finn and nor have I read (although I started it) The Brothers Karamazov. I haven’t read all seven volumes of Proust, but I know only one person who has. Take a bow, Patrick Harpur, writer, whose latest book is The Stormy Petrel.

I am eagerly awaiting the paperback version of my latest book to hit the shops. It’s called Ireland’s Green Larder and it will jump out at you when you see it, as it has an extraordinarily brilliant cover. It depicts the little, hardy, black Kerry cow, which reflects a little of what is inside the covers. My book is a social history of Ireland seen through the prism of food and drink, going back as far as I was able to go – a thousand years before the Pyramids – when the native people of this island created a field system in a cold, windy and salty spot beside the sea in north County Mayo. Amazingly, it is the oldest known field system in the world. And I follow the fortunes of Ireland, concentrating on the rural poor, right up until the present day, taking a look at Ireland’s thriving cheese making, its adventurous attitude to influences from outside and singing the praises of its seafood and beef.

I do, of course, look at the history of the urban poor and I report on what was happening in the Big Houses throughout the ages. But my emphasis is on the story of the mass of people in rural Ireland.

My book is written for the general reader and I’ve made it as lively as I can, drawing on all manner of sources, from the lives of saints to old newspaper reports, and from ancient law texts to diaries, ballads, letters, interviews, folklore and a whole salmagundi of references to food and drink down the centuries.

It’s been described by chef Richard Corrigan as ‘the only book on the social history of Ireland you’ll ever need’ and by Darina Allen of the Ballymaloe Cookery School as ‘a work of considerable scholarship, enchantingly written in evocative prose…’

Go on and treat yourselves to it. It’s a book I’m proud to have written.

Ireland’s Green Larder: The Definitive History of Irish Food and Drink by Margaret Hickey, is published in paperback by Unbound

Want more great Boundless  content in your inbox every Sunday? Sign up to the free, weekly newsletter, here. 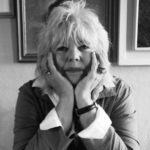 Formerly an editor at Departures, an international travel magazine, and Country Living magazine in the UK, Margaret Hickey also had a freelance career writing on food, drink and travel for most of the national British press, including The Financial Times, The Guardian and The Times. After she moved to Ireland, her book Irish Days, a collection of oral histories, was published in both Ireland and the UK. Her new book, Ireland's Green Larder, a history of Ireland seen through the prism of food and drink, was published by Unbound in the spring of 2018 and the paperback version in the spring of 2019. She has been a guest speaker at numerous festivals, the University of London and NUI Limerick. She is currently Vice Chairperson of Portumna Arts Group, which runs Shorelines Arts Festival, and for many years she has been a judge at the Strokestown International Poetry Festival.
Tags :
Q&A Books drink food Ireland Mayo reading

An at-home with novelist Roma Tearne and the good old British dinner party.