read on
Photo by Bill Oxford on Unsplash

The short answer is, I don’t write when I’m driving – although sometimes I ask my wife Sarah to write a note or two. I write mainly in my office which looks out over South Head in the Peak District so lots of sky and weather inspiration. But I take a notebook everywhere, and write at lunchtimes on hikes, on holiday, in bed. Everywhere!

I recently read Normal People and was surprised how much I liked it. The book I wish I’d written is Cormac McCarthy’s The Road, and I’ve been reading his backlist. The All the Pretty Horses trilogy is mesmerising and was when I decided to write some Nepalese dialogue in The Trail. I also really liked his dour Suttree, and The Orchard Keeper (my other hat is a smallholder: I have a passion for apples, and grow over fifty varieties). I’ve also been reading a lot of Sebastian Barry, having started with the brilliant Days Without End. And also anything by the boundary-pushing Ali Smith.

My (recently-completed) MA in Creative Writing at Manchester Metropolitan University has led me to watch films, plays and TV in a different, more interesting way. Analytically, in terms of structure and character and story, but also emotionally, too. Manchester By the Sea was incredibly powerful, and the scene where Lee Chandler (Casey Affleck) meets his ex-wife when she’s pushing her baby will always stay with me. TV, too, can reach these heights; I thought Fleabag was incredibly well-written and moving.

With plays I always like to read the script beforehand. The last play I saw was Waiting for Godot; it’s a play I think you could see a hundred times, and not be bored.

I liked books on self-reliance and self-sufficiency, and read most of Willard Price’s adventure books and Hugh Lofting’s Doctor Dolittle series. The book which had the greatest impact was The Swiss Family Robinson, and I read it over and over. I sometimes think of it when I’m working on the smallholding; building a bespoke hen house or fixing gutters to a shed.

I was a police officer for 15 years, starting in London and finishing as a DI at Moss Side in Manchester. Really, it finished me

Writing didn’t so much inspire me as save me. I was a police officer for 15 years, starting in London and finishing as a DI at Moss Side in Manchester. Really, it finished me.

We then moved to a smallholding in the Peak District, and I began to write. The combination of working outside and writing helped me understand what I’d been through, and moved me forward. I wrote a memoir, From Cop to Coppicer, which attracted strong interest from two agents. I came close to being published – but not close enough! One agent said I should write a crime thriller, and I’ve never looked back. I’ve now been writing hard for a decade, and have written a memoir, a trilogy of crime novels, a rural everyman called Twelvemonth (influenced in tone by Suttree).

I use both. I find my brain works in different ways, and it’s interesting to merge the two methods when I type up my notes. On paper I can record a lot of ideas very quickly, often creating a quasi mind map.

I do! It was Nabokov in Lectures on Literature who wrote, ‘one cannot read a book: one can only re-read it.’ What he meant, I think, was that the first time you read a book, you inform yourself of the story. The second and subsequent times you can enjoy – revel in, even – the writing. Like having a bath: once clean, you can lie back and enjoy!

When I left the police, I suddenly had the time to read a lot of books. This included re-reading some I’d read before, usually in a hurry, including Sophie’s World, The Magus, Catcher in the Rye, Cloud Atlas, Zen & The Art of Motorcycle Maintenance and of course The Swiss Family Robinson.

Interestingly, the same is true of writing. You write the first draft to tell yourself the story. Second and subsequent drafts are needed to hone the characters and settings and pace and tension – and a million other things!

By page 87 of James Ellroy’s Black Dahlia, I’d become such a fan of Bucky Bleichert and so interested in him that I didn’t care if he investigated the inside of a matchbox, I wanted to read about it

One of the classic texts of crime fiction is James Ellroy’s Black Dahlia. Its protagonist is LA patrol cop Bucky Bleichert and although the plot doesn’t kick in until page 87, it didn’t matter. By page 87, I’d become such a fan of Bucky and so interested in him that I didn’t care if he investigated the inside of a matchbox, I wanted to read about it.

Not yet this year, but last year I went a couple of times. I don’t tend to borrow books because I like to keep them; I always stick a post-it-note in the back with references from reading, and I’m always referring back to them. I love second-hand bookshops! I love bookshops!

Not guilty, but… I often ask for books as presents – I try to read the Man Booker winner every year – but don’t always get round to finishing them. Next to my bed and unread are Lincoln in the Bardo (page 39), and also, of course, Ulysses (page 105), and Will Self’s Umbrella (page 12).

The Trail is my debut novel, and the first in my trilogy of crime thrillers: A missing person enquiry leads Manchester DCI Rick Castle to Nepal.

The Trail by James Ellson is published by Unbound on 20 February 2020. 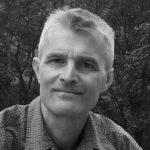 James Ellson was a police officer for 15 years, starting in London and finishing as a DI at Moss Side in Manchester. When he left the police he started writing, and has been writing ever since. He is currently working on the sequel to The Trail. He also mentors writers with work in progress, and talks at writing groups and festivals. James was a keen climber and mountaineer, and has visited Nepal many times. In 2004 he climbed 6,812 metre Ama Dablam, and in 2008 soloed the Matterhorn. He now lives with his wife on a smallholding in the Peak District, which includes bees and an orchard. He offers tours, runs courses and gives talks on self-sufficiency and apples.
@jamesellson3
Tags :
Q&A Crime Police thriller writing

The 1980s were not all big hair and pop music - there was also fear, misunderstanding and police brutality.