read on
Photo by Spenser on Unsplash

By Alexander Chee
Extract | 6 minute read
The 1980s were not all big hair and pop music - there was also fear, misunderstanding and police brutality, as Alexander Chee recalls in this extract from his memoir

What I remember first is our hands, raised in the air, waving and punching like sea grass in a tide, the procession moving slowly for the AIDS- and ARC-impaired, some of them in wheelchairs. At the beginning of the march, down by City Hall, our police liaison was thrown to the street and handcuffed as he tried to identify himself to one of the cops. He had stepped off the sidewalk, where we were confined, into the street, where helmeted motorcycle cops raced in figure eights and ellipses, in formation. Later, we will listen to him tell us about how the police refused to give him water to take his AZT, and taunted him with reports that some of us had been shot. But for now, he vanishes behind a cloud of riot shields.

We keep moving, eager not to have the march called off, as it is our bluff: at the end of it, we plan to block traffic to protest government inaction in the face of the AIDS epidemic. It is October 6, 1989. A cold, gray San Francisco day, the kind that replicates the mood of a flu, hot and cold, sweaty and chilled. The sun hides. To the bystanders, I think we must look like any theatergoers out for early tickets, except for the crowd of policemen in armor following us, all of them wearing latex gloves.

They confine us to the curb nearly the entire way, making sure we obey the stoplights and let the Friday tourist traffic through. We chant, though fairly quietly, chastened by the early arrest, the weather, and the flood of police: our count gives them two cops for every protester. When we reach the Mint, we throw pennies painted red over the sides of the fence: blood money was the idea, and the very innocence of the gesture stings at me. I wonder if we are deranged, to be meeting these police with arts and crafts. “Spend our taxes back on us!” yells a marcher next to me, as if he suddenly remembers his anger.

At the Castro at last, the traffic makes a break in the police line like a cut vein, and we spill out across the intersection into a circle, linking arms and cutting off all four directions of traffic. Now the chanting is sure and strong. “What do we want? Health care! When do we want it? Now!” And the urgency of tone builds as the police whistle and gun their engines, blaring through their horns that we must clear the intersection or face arrest. In the back of the circle, away from the cops, we begin sitting down. The police cannot see this yet, but a group of motorcycle cops sheers off, headed to the side streets to make their way around to the back, an ancient strategy. At the corner of Eighteenth and Castro, another crowd of people billows out from the subway and finds it cannot cross the street. Some of them recognize friends in our group and wave as they sit down also. It is dusk, rush hour now, and it occurs to me that that corner of the sidewalk will get very crowded.

The police round us up onto two corners, with the exception of the sitting group, whom they start to haul off. Batons are out, extended at arm’s length, batting hands to make them release, or barring our exit onto the street. When I try to get through the police, one of them tells me martial law has been declared. “Doesn’t the president declare that?” I ask. He says nothing else, looking down, perhaps ashamed to be caught in a lie. Behind us, another group of subway travelers arrives to find they are now included with the demonstrators. Since I can’t leave, I climb up onto a newspaper box, balanced against a lamp pole, just in time to see the last of the protesters taken from the middle of the street.

She is smallboned, her hair woolly and red … the policeman pulls her hair, and throws her, face-first, to the ground

The riot police are marching up and down the street in twos. It’s comical, even pathetic. They are trying to look strong. They begin to let traffic through. But there is another group prepared to replace them, and those people run in and sit down in the street, arms locked. A man on a motorcycle finds himself too close to a policeman, who whirls on him, whistle blowing, and he is pulled from the bike by two others. The first kicks the bike to the side. The biker bows his head slightly as he is thrown to his knees, and then doubles over as the blows rain down, first fists and then a baton scything through the air. “What are the charges?” a woman nearby yells. The crowd picks up the chant. “What are the charges, what are the charges, what are the charges!” She is smallboned, her hair woolly and red, and it rises into the air where it is easy for the policeman to grab, and he turns from the beating, pulls her hair, and throws her, face-first, to the ground.

Everyone is running now, and everywhere batons rise. The screams lift out of the street, and in restaurants up and down the block doors are locked and the diners are informed, You cannot leave, not right now, sorry for the disturbance. On top of my newspaper box, the air feels very still, but I am watching a boy I know walking backwards, his hands in the air, almost crossed, as people run for the curb and the V formation of police approaching them breaks as they charge. The point man swings and his baton glances off my friend’s forearm to strike his forehead. My friend crumples, his face already bloody, falling on the sidewalk he was trying to reach. The policeman responsible keeps moving on, and the two coming from behind kick a newspaper box on top of my friend’s legs, their legs rising slowly and in unison, like awful showgirls.

I jump down from my box. I am afraid he will be trampled. He is unconscious and not in view of the panicked crowd. I go to his side and find someone already there, pushing the box off him. I bend down and say his name softly. Mike, I say. His eyes open, and he is already crying. This is his first police riot, mine too. The blood is always heavy on any head wound, I say, remembering something random as I try to calm him. And I tear off a piece of my T-shirt to press against his head.

People surround us, and soon a medic appears. I follow them as they take my friend to the ambulance. “Are you with him?” they ask me, and I say yes, because it is the best thing for me to do. “Put your hand on the ambulance,” they tell me, “so the police won’t arrest you,” and I do.

I stand there, my hand on the ambulance, and a television news crew arrives and asks me to describe what I’ve seen. As I tell the story, I keep my hand on the ambulance the entire time. After they leave, I think about how, up to now, I have thought that I lived in a different country from this. But this is the country I live in, I tell myself, feeling the metal against my fingers.

This is the country I live in.

Alexander Chee’s memoir in essays, ‘How to Write an Autobiographical Novel’, is published by Bloomsbury 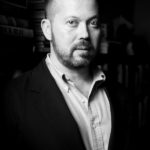 Alexander Chee is the bestselling author of the novels The Queen of the Night and Edinburgh. He is a contributing editor at the New Republic, an editor at large at Virginia Quarterly Review, and a critic at large at the Los Angeles Times. His work has appeared in The Best American Essays 2016, The New York Times Magazine, Slate, Guernica and Tin House, among others. He is an associate professor of English at Dartmouth College.
@alexanderchee
Tags :
Extract 1980s AIDS AZT healthcare March Police protest riot police

A personal history of the ‘stop and search’ laws

Black men are still disproportionately stopped by police in Britain today. That breeds cycles of hate and hostility.