read on
Photo by Sebastien Varin on Unsplash

On any flat surface at home. And in hotel rooms, cafes, waiting rooms, aeroplanes… Because I have a full-time-plus day job that involves international travel, and two very young kids, I can’t be too precious or ritualistic in my writing habits. I wrote the first draft of my last published essay sitting cross-legged on the floor at a departure gate in the Dubai airport.

I just finished reading Miss Burma by Charmaine Craig. Although this novel was based on the lives of the author’s grandparents and mother, it felt surprisingly relevant and contemporary. My family and I moved to southeast Asia a few months ago, so I’ve been trying to learn about the history and culture of our complex and fascinating new home. I also read Educated by Tara Westover fairly recently and have not stopped thinking about it; it is haunting in the best possible way.

The best film? I have a two year old and a four year old, so, sadly, the last few films I’ve seen on the big screen have been Disney productions.

I was a shy and book-wormy kid. The first books I remember reading that made me fall in love with the art of story telling, that I’d sneakily read under my covers after bedtime, and that offered my young imagination such great companionship, were girly classics from other eras: anything by Louisa May Alcott, Laura Ingalls Wilder, Lucy Maud Montgomery, or Frances Hodgson Burnett.

I discovered Caroline Knapp, whose books were searingly candid memoir, sharp social commentary, and beautiful works of writing. Instantly I knew that this was the kind of writer I wanted to become

When I was in college, I started to read the kind of non-fiction books that would change the way I both read and write. Based on an intriguing review in the New York Times, I discovered Caroline Knapp, whose books were searingly candid memoir, sharp social commentary, and beautiful works of writing all at once. Instantly I knew that this was the kind of writer I wanted to become. She died not long afterwards, of lung cancer at age 42, a year younger than I am now. Her book Appetites has travelled the world with me as part of a small collection that keeps me company in new places (others include The Maytrees by Annie Dillard, The God of Small Things by Arundhati Roy, Alice Munro’s Selected Stories, A Few Short Notes on Tropical Butterflies by John Murray, and Cutting for Stone by Abraham Verghese.)

I still keep a hand-written journal but all my ‘real’ writing is done on my laptop.

Too hard to choose just one – I have so many favourite fictional heroes! A few that come immediately to mind: Jo March from Little Women; Scout Finch from To Kill a Mockingbird; and Lisbeth Salander from The Girl with the Dragon Tattoo.

I was in my twenties and dating a poet from Tennessee. At the time, it felt important that I evidence a literary appreciation for writing from the American south

Maybe six months ago? I’m very attached to the public library in Ridgefield, Connecticut, where I grew up. I also love the library in Provincetown, Massachusetts, which houses a huge replica of a schooner, where I’ve spent many happy hours writing, and where my kids now like to play.

I think I’ve only lied about reading William Faulkner. I was in my twenties and dating a poet from Tennessee. At the time, it felt important that I evidence a literary appreciation for writing from the American south. Even as I said it, I was kicking myself.

My memoir, Those Who Eat Like Crocodiles, details my experience as an American, female clinician in the African Kingdom of Swaziland (now Eswatini) with the mandate to circumcise eighty percent of the country’s men. It marries the story of an outrageous public health initiative with one of fighting for an unlikely love, exploring along the way the power dynamics that separate one country from another, one person from another. During a year marked by the greatest absurdity I’d ever known, Swaziland proved a testing ground not only for a global health program, but for my own ability to cope, to understand, and to connect.

Those Who Eat Like Crocodiles by Laura Fitzgerald is published by Unbound. 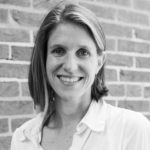 An American nurse-midwife, Laura Fitzgerald has worked in direct client care and in public health programs domestically and overseas for twenty years, serving extended posts in Malawi, Tanzania, Eswatini and Pakistan. Laura now lives with her husband and two daughters in southeast Asia. Those Who Eat Like Crocodiles is her first book.
Tags :
Q&A Eswatini Little Women Swaziland writing

Silent rejection, argues one writer, which becomes a never-ending - and infuriating - act of waiting.