By Lizzie Kaye
Review | 4 minute read
Aminder Dhaliwal’s new graphic novel explores what happens in a world in which men have suddenly died out. Not much to worry about, it turns out...

In Aminder Dhaliwal’s graphic novel Woman World we are given a glimpse of what life would be like if the human race just stopped producing men. Babies are born, but they’re all girls. The existing men start dying off. No one takes the issue seriously and the world slowly begins to change. Men start disappearing, too, kidnapped off the streets as they become a rarity and a black market springs up to deal in male ejaculate in the hopes of continuing the human race. Eventually, though, there are none left. There is a hint of a brief period of unrest, followed by the collapse of civilisation, and then the rebuilding begins. This is all explained to the reader in a coloured section of delicate tones that opens the book, while the strips are in the more traditional cartoonist’s black and white.

Woman World collects Dhaliwal’s cartoons and comics previously published on Instagram (though new unpublished material is included), and where the premise would more usually be expected to develop into a distinctly dystopian thriller, instead the view we get of a post-male society is… really quite pleasant. We get hints that there may have been rough patches, but overall things carry on largely as normal. Women, after all, are people too.

The comics focus on the life of a village as its residents set about reclaiming a space on the planet for humankind, and a series of running jokes links the strips together. Great women feature and become talismans of the new world order – notably, Beyoncé and her various body parts are appropriated as flags under which the new communities can rally. The village in the comic is known by its flag, Beyoncé’s Thighs, while neighbouring villages are named variously after her calves, lips and Eyes of Smize.

The form the comics originally took dictates the reading here. They are short, with few strips running over a couple of pages, the payoff and jokes coming quickly. Underneath the light-hearted observations, though, Dhaliwal uses the setting to explore a number of concerns plaguing women today, highlighting the presumedly much more permissive society we’d have without men. Gaia, the mayor of Beyoncé’s Thighs, is a happy nudist, as are leaders of other villages. The Doctor, sent from the big city, is topless and her mastectomy scars are visible. This is never remarked upon until she is required to give a patient stitches. When she warns that it might scar, she is met with a cheerful, ‘That’s OK, I like scars.’ Acceptance of people’s differences is a key component of the new world order.

Men do not return. It’s sad. They will be missed. Life goes on

The lack of men doesn’t mean a lack of love, though. The first punchline of the book sets this up, as the majority of assembled women raise their hands when asked how many of them considered themselves bisexual, anyway. Dhaliwal also unpacks the pain of unrequited love, and the pleasures and pitfalls of long-term relationships. Simmering in the background is the constant conundrum of how to keep the human race going as the sperm banks begin to run out of samples. As female-only reproduction becomes a reality, the new world order seems set. Men do not return. It’s sad. They will be missed. Life goes on.

The instigating idea for the comics is mentioned in a photo of a text exchange on the last page of the book. Dhaliwal was toying with creating a world where men had become extinct and women were struggling with learning how to speak again, now that they were no longer being constantly interrupted. There are numerous other observations of this kind throughout the book, highlighting just how much of the modern world is gendered, often in a nonsensical way. Rather than coming across as angry or resentful, the tone is more bemused. When the world runs out of lady razors, the scavenger is apologetic, but stumped as to what to do with all the men’s ones she has found. A shirt is deemed perfect, except that the buttons are on the wrong side, and thus must be discarded.

It all feels very gentle, a subtle poke and nudge at the ridiculousness of the world we live in. The concept of power as we know it has largely disappeared in Dhaliwal’s world. Women exist, they love, they have dreams and they are human.

Woman World by Aminder Dhaliwal is published by Drawn & Quarterly, £17.99 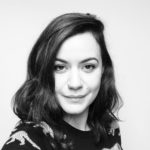 Lizzie Kaye is a commissioning editor at Unbound, specialising in comics and graphic novels. Before joining Unbound, she was at Titan Comics where she ran the European line and a number of licensed properties, and SelfMadeHero, the award winning independent graphic novel publisher, where she was Editorial and Production manager. She is based in the north of England.
@LizzieHKaye
Tags :
Review dystopian furture Graphic novel Men Women

...and the silence in between. What are we to do if there is no way to properly communicate as men?