read on
Photo by Aaron Burden on Unsplash

By Phil Teer
Q&A | 6 minute read
Phil Teer talks morning coffee, morning pages and the kind of reading that smashes through a wall in your memory

I write at my desk or at the kitchen table or on trains. Years ago I did the Morning pages exercise from Julia Cameron’s The Artist’s Way. The habit stuck and I now write first drafts first thing, before either the house, or the reasoning part of my brain, wakes up. Early morning is the irrational zone.

Redrafts and edits I do when I’m properly awake, at my desk, by the window, looking out on the street, dog at my feet, coffee by my hand. A cigarette burning in an ashtray would complete the scene, but I no longer smoke.

The Long Take by Robin Robertson is a novel length lyric poem. That sounds hard going but its anything but. It’s film noir poetry, set in a fractured, changing, post-war LA of disappearing neighbourhoods and film shoots on every corner. It’s about a moment in time when America lost its self-confidence, when things got darker. There are echoes of the movie Chinatown. It’s infused with jazz and long shadows and an undertone that is as much hard-bitten Scots as hard-boiled Chandler.

I read the first two volumes of John Richardson’s A Life of Picasso and I’m on the third. Richardson was insightful about creativity, serious about art, bluntly honest about Picasso’s less endearing traits and a delicious gossip. Picasso’s work moved from period to period as his life changed. What was going on in his life, who he was in love with, who he was running away from, what poets were hanging around his studio, what rivalries were being played out and what was happening in the world around him reveals the truth of the art.

2019 was a pretty good year for cinema. Wild Rose, Marianne and Leonard, Once Upon A Time in Hollywood, Out of Blue, Vice and JoJo Rabbit were all brilliant and flawed in their own ways but Can You Ever Forgive Me stood out. Melissa McCarthy and Richard. E Grant were superb as the book trade con merchant odd couple.

My primary 6 teacher gave me her copy of Watership Down. It was huge and took me ages to read. But afterwards it was like room had been created in my brain. I moved onto Conan-Doyle’s complete Sherlock Holmes and never looked back. To this day, I have a fondness for huge, all-consuming books.

It was more music that inspired me to write. I started writing lyrics and poems when I in my early teens. I wrote a music play, called A Life (16), with a mate. We tried to persuade the Tron Theatre in Glasgow to let us put it on. We were bold but pretty naive. We were from the schemes and had no idea how these things worked. The Tron said no, so we went outside and busked it instead. Two nutters in long coats and make-up shouting poetry at Glasgow’s shoppers. We made enough money for a few beers.

Lanark by Alasdair Gray is about the impossibility of great art coming from an industrial city. There is a line about how if a place has never been used by artists, then not even the residents can live imaginatively. That chimed with me. All we were trying to do was live imaginatively.

Both. And phone. I tap notes into my mobile when out walking. Before smart phones I always had a small notebook and pen in my pocket. I miss the analogue, you can sketch as well as write. My handwriting is terrible though, so everything ends up on the laptop sooner or later.

I recently re-read All That Is Solid Melts into Air by Marshall Berman and found notes in the margins that I’d written when I was 18 or 19. It was like time travel. I was confronted by my younger mind. A wall in my memory smashed open and all these forgotten emotions came flooding through. When I wrote those notes I was so confident and really excited about the ideas in the book. Re-reading them was a powerful experience.

Other than that, I got fed up waiting for the next Rebus novel from Ian Rankin so I read them all again from the beginning. I guess no spoilers is the benefit of a bad memory.

David Bowie touched the heart of all us outsiders and weirdos. He lifted us out of our skins and gave us a more glamorous form

Hero?  David Bowie, in the sense that he was a fictional character created by David Jones. He touched the heart of all us outsiders and weirdos. He lifted us out of our skins and gave us a more glamorous form. In character, he was our ego-fantasies personified. We became him as we sang along. Being Bowie was better than any drug. I think that is what it means to touch the sublime. Very few artists have that power. Now he is being deified. There are statues, shrines, fan-art, birthday celebrations, posthumous releases and books: books that glorify his life, books that record his one-liners as wise teachings, there is even a book about the books on his top 100 books list. He’s bigger now than he ever was. The world has forgotten that it all but forgot about him for thirty years. Bowie is the 21st century’s first god.

Villain? The Milkman in the Anna Burns novel is a sinister and threatening figure. I think every town has its Milkman. Maybe not a terrorist, but a violent man or woman. A bogeyman amplified by gossip and fear. All the characters are villains in Dave Keenan’s For The Good Times, but the smiling, ruthless Jimmy stands out. A kind of Irish Alex and the Droogs from A Clockwork Orange.

About six months ago. Brighton has a nice modern library on Trafalgar Street. It seems to be well used. When I was a child, my mother and I read the local library dry. By the age of ten I could pass for 12 and get into the adult library to do some underage reading. Every child should have access to a library because not every house has books.

Ulysses. I’ve dipped in and out but never read it all through. I’ve never got to the end of Gravity’s Rainbow either.  Yet I love what I read of both. Weird.

A universal basic income will detonate an explosion of creativity and imagination.

The Coming Age of Imagination by Phil Teer is published by Unbound on 6 February 2020. 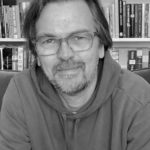 Phil Teer was a co-founder of the legendary creative agency St Luke’s, an experiment in employee co-ownership and creative working. He blogs at Artists Create Markets on Medium and is fascinated by the power of creativity to transform people and places.
@pteer
Tags :
Q&A David Bowie morning pages writing

Silent rejection, argues one writer, which becomes a never-ending - and infuriating - act of waiting.