read on
Photo by Brett Jordan on Unsplash

Giving a voice to the voiceless

By Rich Hardy
Q&A | 5 minute read
Why surfing helps my writing life, but noisy buzzards definitely do not

I usually write from my home office in Cornwall. It sits on top of a hill, faces south and looks out across the treetops of a little valley. Every day, and almost from eye level, I watch a family of buzzards soaring on the thermals. The youngest we’ve called Fred. He is the noisiest and most distracting buzzard I’ve ever known.

Writing Not As Nature Intended has often been a challenge, not just because of Fred’, but also because I share my house with a number of animals my partner Pru and I have rescued from shelters. Cats and dogs run amok inside, while outside the chickens and ducks have full control of the garden. Some days it’s quite Hitchcock-esque with birds blocking doors, effectively barricading us inside. The cats have also rewritten Not As Nature Intended on more than one occasion as they pad their way across my keyboard on the way to somewhere warm and cosy.

I’ve just read Grilled by Leah Garces. Published by Bloomsbury in September 2019, it’s a fascinating journey of one campaigner’s challenge to reform the chicken industry in the USA. We eat more chicken than any other land animal and Leah does a great job explaining what the true cost of that is – not just to the welfare of the animals, but also to our environment and human health and for the farmers themselves. It’s also a great example of how two adversaries – animal activists and factory farmers – can meet in the middle to find solutions that work for both of them.

I’ve been a bit off-grid of late so haven’t seen too much, except for Bait, a new black and white film shot in Cornwall on 16mm that portrayed the tensions between locals and emmets (Cornish for ‘tourists’) in an amusing and timely way.

To Kill a Mockingbird by Harper Lee was the first book I remember reading. I think it was pretty compulsory for most kids at school to study it. Though I definitely did not do everything the teachers told me at school I did read this book and enjoyed it. I’ve re-read it a few times since and watched the 1962 film a couple of times too. I think because it addressed racism and injustice it helped open my eyes to social justice issues at an early age and perhaps put me on the path I’ve taken all my professional life – campaigning and activism.

I had no prior ambition to be a writer. ‘Not As Nature Intended’ only came about because I felt I had to give a voice to the voiceless having seen what I’d seen of the way we’ve treated animals for food, fashion and entertainment in the past two decades.

I use a laptop, but the idea and what to cover all started off in a notebook first. I’d keep the notebook on me at all times and just jot down thoughts and memories when they came to the surface. I often took the notebook with me to the beach as I found surfing was a time when I had the clearest thoughts. Waiting for the next set of waves to arrive I’d often have a good idea for the book and then ride the next wave into shore so I could get it logged in the notebook before it got washed away with the whitewater of the North Atlantic.

I used to re-read books of fiction but not so much anymore. However, books I can learn a skill from I’ll pore over time and time again. At the moment I’m really into no-dig gardening and am learning a lot about how to grow vegetables by working with the soil, not against it. Perhaps not surprisingly as a vegan, I eat a lot of veggies. Knowing how to grow my own in the most natural way which is good for the health of all the organisms that live in the soil and around the allotment is really important to me.

My fictional hero is Jonathan Livingston Seagull (by Richard Bach). He was a seagull who strived to reach his greatest potential and broke away from the boundaries that would have otherwise limited him.

Keeping the animal theme running, my best fictional villain is Napoleon from Animal Farm (by George Orwell). Tyranny and dictatorships are his thing, and that makes him a supervillain in my eyes.

With my fiancée, a few weeks back. She’s been delving into her family ancestry. Like me, she has an investigative mind, so has been digging around for clues in some of the historical records you can find in local libraries. They’re super useful places.

Mary Shelley’s Frankenstein. I was meant to read it for my A’Level English Literature exam. I only found time to read the back cover and that’s what I based my exam answers on. Suffice to say my results were a horror show.

Relying on a hidden camera, a bluff and a little bit of luck, Rich finds imaginative ways to meet the people and industries responsible for the lives and deaths of the billions of animals used each day to feed, clothe and entertain us.

What he discovers will shock, but it may just inspire you to re-evaluate your relationship with all animals and what role you let them play in your life.

Sometimes dangerous, often emotional and occasionally surreal, this one-of-a-kind perspective examines what it’s like to live and work amongst your adversaries and what you can achieve if you feel strongly enough about something.

Not As Nature Intended by Rich Hardy is published by Unbound. 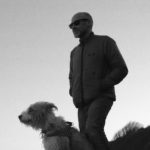 Rich Hardy has been a professional environment and animal protection activist for over 25 years. He has led campaigns for some of Britain’s most creative and successful non-profit organisations including Surfers Against Sewage, cleaning up Europe’s coastlines and starting their fight against ocean plastic, and Veganuary, a pledge campaign that inspired a quarter of a million people to try a vegan diet in 2019. But all the while, over the course of two decades, he’s been going undercover to document animal suffering, for human gain. His images and testimony have fuelled the work of over twenty international animal protection organisations. His high-risk endeavours saw him awarded a prestigious Daily Mirror 'Special Recognition' Animal Hero Award in September 2019.
Tags :
Q&A animals rights battery chickens vegan veganism