read on
Photo by Jakub Gorajek on Unsplash

I know some writers crave silence but the perfect location for me is in a busy café, surrounded by clatter and conversation. Not background music, which seems to distract me, but general babble. The ideas seem to flow best that way. Writing as I drink coffee is probably a way of kidding myself I am not working. Also, as Wanderful is all about street life, it seems appropriate.

OK, so it’s a bit dark, but I was really gripped by Madeleine Albright’s book Fascism: A Warning. The title says it all. It’s a series of short stories about the rise of recent autocrats. She describes herself as an optimist who worries a lot. The book left me feeling optimistic, if only because there’s a certain predictability about the rise of evil which makes it easy to track. But worrying also. Best film, Once Upon a Time in America; but that’s probably also because it was the last film I saw.

It feels a bit nerdy to admit this but the book that came to me first when considering this question was The Continuum Concept. I know. It’s a non-fiction work by social anthropologist Jean Liedloff, a study into parenting in so-called primitive societies. It made me realise that the experiences I was having as a teenager weren’t specific to me. It helped me put things into perspective. As a kid, the one that leaps out of memory is Richard Scarry’s What Do People Do All Day? I can still picture the illustrations of all the different jobs and professions. That might be why I’ve tried a few rather than settling for one.

I’d written plays, stories and film treatments before but the book that inspired me to write (hopefully) engaging non-fiction was Ken Wilber’s A Brief History of Everything. Someone had left a copy at a hostel in Peru where I was touring with my opera company. Our Director, David Glass, shoved it into my hands saying he thought I’d find it interesting. Unlikely location but synchronicity was at work because from the moment I opened it I thought, ‘Ah! This is what I have been up to without realising it’. Wilber has a brain the size of a moderate planet and the book covers a huge spectrum of human knowledge – but he shapes and refines his ideas so they are instantly graspable. It’s conversational in style, with Socratic questions and answers. It changed my life and encouraged me to think I could perhaps start crafting my ideas into accessible books. Another person who does this amazingly well is my friend and mentor Charles Handy. If you haven’t read his latest 21 Letters on Life and its Challenges, run, don’t walk, to the bookshop.

Pen and paper for initial scribbles. But not even I can read these, so laptop for the writing. Then, pen and paper printout for the final edits.

I do re-read books. The film that plays in your head is never the same twice. I think that’s why people go to the opera again and again to see the same works. Each one adds a layer. Also, I tend to read when I am in bed and new books can overexcite me, so I don’t sleep well.

Lizzy Bennet is the Sigourney Weaver of Austen’s world

Best hero? On behalf of the Pearl family I have to say Elizabeth Bennet from Pride and Prejudice. We spent a few years in Italy when Elsa and Zachary were little and to counterbalance Italian TV we would watch and endlessly re-watch the BBC’s production (the one with Colin Firth and the wet shirt). Lizzy Bennet is the Sigourney Weaver of Austen’s world. Brilliant and badass. Hero, definitely. A woman once came up after a talk I had given about the Hero’s Journey to chastise me for sexist terminology. ‘Hero has the word he in it’, she said. I accepted her point but added, ‘It also has the word “her” in it’. As to villain? So many to choose from. I have played a few on stage. But the one that comes to mind is the Child Catcher from Chitty Chitty Bang Bang. He surfaces in my new book, in a chapter on the wisdom of strangers and how, through bedtime stories, parents train us to be wary of them. I will never forget Robert Helpmann’s funereal pest-destroyer tempting us little ones out of hiding. ‘Cheeldren. . . where are you?’ Brilliantly villainous!

Oh, that’s an unexpected question and the answer makes me sad. Not for ages. And then it was for the children. I pass my childhood library in Swiss Cottage, London, often. You’ve prompted me to go in and visit again.

Too many. But top three are probably Anna Karenina, The Catcher in the Rye and all of Proust. The shame!

Finally, what’s the elevator pitch for the book you’re publishing?

As its title suggests, Wanderful is about the power of taking yourself off the straight and narrow mentally and physically, unhooking from the daily routine and exploring new routes in life. These are complex times. Everything is shifting. Carrying on your life and career in a straight line makes no sense. We need a new navigation system, a satnav for the soul, to help us find our own direction and stay orientated. Wanderful introduces the reader to a system that I have developed over the last decade, leading a social venture called streetwisdom.org that uses ordinary city streets to help people find direction and inspiration. It’s written as a stroll through the ideas and techniques behind Street Wisdom’s free, public WalkShops. They include: awakening your intuition, breaking the tyranny of straight line thinking, learning to get lost, switching on the intelligences that reside in your body, how to talk to strangers, walking your way to better decisions and perhaps most intriguingly, how to invite more synchronicity and happy accident into your life. I am hoping people will find it an intriguing and wanderful read!

Wanderful by David Pearl is published by Unbound on 23 January 2020. 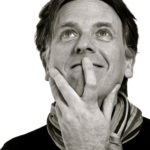 David Pearl is an innovator in business, the arts and social change. Drawing on a lifetime’s experience in opera, theatre and film, he has pioneered the use of the arts in business and is creative confidante to high-profile CEOs and their teams across the globe. David’s work has appeared in media such as the BBC, The Sunday Times, New Statesman, The Independent and The Telegraph.  Wanderful is David’s third book, following Will There be Donuts?, on the art of meeting, and Story for Leaders, a handbook for anyone who wants to harness the engaging power of narrative. David is the founder of the non-profit social venture Street Wisdom, which transforms ordinary city streets around the world into inspirational learning zones. He keeps his creative instincts sharp by making up operas on the spot with his improvising ensemble, Impropera. David lives in London and Italy with his family and is an enthusiastic, if out of breath, road cyclist.
@DavidPearlHere
Tags :
Q&A Elizabeth Bennet Fascism Madeleine Albright

Curzio Malaparte: Self-love among the ruins

Curzio Malaparte was an editor, satirist and dazzling writer. He was also a fascist and a consummate opportunist. So can we value his writing today?