One for the road?

By Dan Kieran
Essay | 9 minute read
Why do we drink? Is 'just one' enough? And if not, why not? A writer reflects on these questions and wonders what lies on the other size of Britain's boozing culture

Is it possible to drink and not drink?

A few months ago a friend came over to stay from New York. We met at the Unbound office in Islington and walked down to Cannon Street station to get the train home. He had only been to London once very briefly before.

We caught up as we walked through the City of London, and took a small detour so I could show him the recently revealed resting place of William Blake. During our conversation, as we navigated through the cars, people drinking pints who had spilled out onto the streets and occasional angry cyclists swerving to avoid them, he turned to me and said ‘what’s the occasion?’ I was a bit confused, ‘What do you mean?’ He pointed to a crowd of office workers with pint glasses on the pavement behind us, ‘all these people on the street drinking.’ ‘Oh’ I chuckled. And then I really started to laugh, slightly nervously from a mixture of pride and shame. ‘It’s just a Thursday after work. This is what it’s like in London.’

He was momentarily amazed, but then recounted stories of British and Irish people he had hung out with in the US and their seemingly continual desire to drink. ‘Do Americans not drink like this?’ I asked. ‘Some, but not like this.’ He gestured to a new group of office workers we came across outside another pub. ‘There are so many pubs!’ 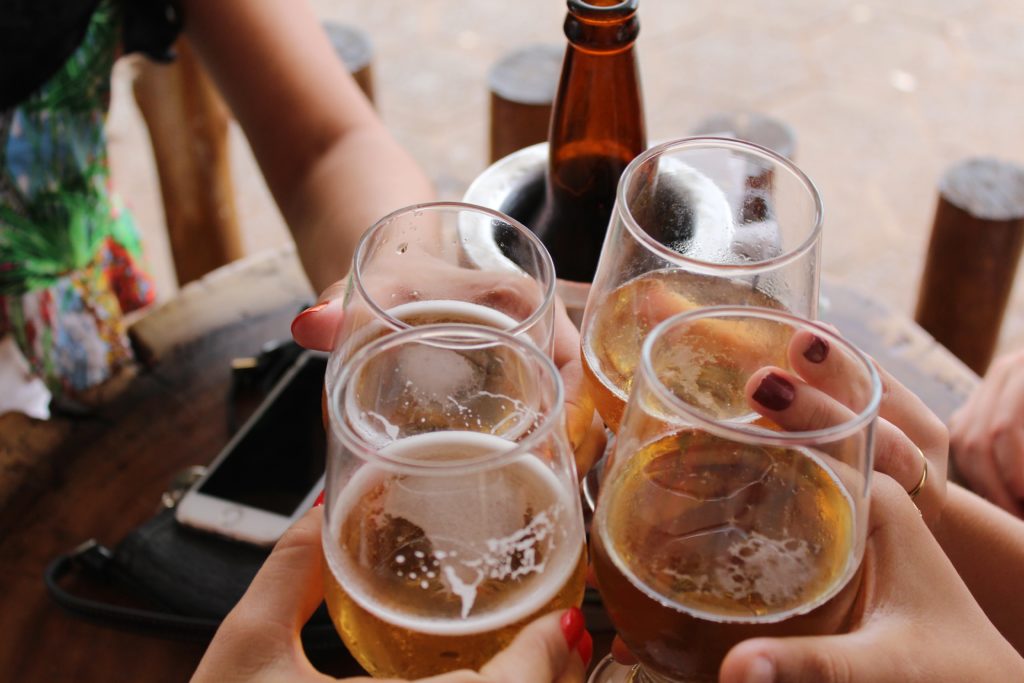 I had my first drink at fourteen. It was a half bottle of Merrydown Cider and I was at a disco in a Village Hall. I hadn’t intended to drink and took it carefully, but still remember the feeling of liberation and the hysterical laughter that evening became filled with. It was the opposite of the cocktail of perpetual teenage nervousness and anxiety that then accompanied every waking moment. I kept clear of spirits as a rule but from then on having a good time with my friends and alcohol were the same thing. And it wasn’t just my teenage friends and me. This method of avoiding stress was evident among my family and the families of my friends who relied on it in exactly the same way. Any kind of gathering involved drink of some kind. Not excessively, but ritually. And ritual is the right word. I am an atheist and none of my immediate family are religious but this was a ritual of our own. ‘Ritual’ means ‘a religious or solemn ceremony consisting of a series of actions performed according to a prescribed order’. This is how booze felt to me. It was part of who I am and where I came from. An unspoken agreement that it was a good thing. It’s not something I’ve ever considered as a choice. Whether it was drinks after work or drinks to celebrate something or drinks to cope with a crisis or drinks because you’re bored or drinks because, well you can’t remember why actually. Drink and fun have always been synonyms.

I am now 43. And apart from when I gave up booze for six months when my wife was pregnant with our son I have spent 29 years as an adult regularly ingesting alcohol. Which is a depressant. So there are only six months of my life as an adult where I have not been regularly ingesting a depressant. This realisation has really shocked me recently. I have no idea what it means to be the adult version of me without taking a drug that makes you depressed. I would say in those 29 years I have got drunk at least twice a week, by which I mean affected by alcohol beyond the point I was enjoying myself, where I started talking a little too bluntly and freely expressing opinions I didn’t hold while sober, because everyone else was drinking that much too. I have walked a path of morning grouchiness my entire adult life without really being aware that it was something I was choosing to do.

I have also never been an adult without suffering some kind of mental health issue. In the form of mild to serious depression and anxiety including a year in my twenties where agoraphobia left me stuck in my flat. Could there possibly be a link between my use of booze and perpetual anxiety?

So I stopped drinking in August after my friend Carlo’s 50th birthday. I gave up for three months and tried to be conscious of how not drinking made me feel. Giving up booze turned out to be incredibly easy once I thought of it not as denying myself something but as deciding not to regularly ingest a depressant. Above all it was a relief. When you home in on the absence of that grouchy feeling not drinking makes you feel like a superhero. You wake up every morning and feel good. And if you remember how you used to feel waking up hungover that feeling of waking up with a spring in your step becomes incredibly addictive. Like happiness even. Even when you haven’t slept because your new baby has kept you up all night you still feel ok. Because it turns out you can cope with not sleeping when you have a new baby. What you can’t cope with is having a hangover and not sleeping with a new baby. You also have more money. You lose weight. There is a kind of lightness to living when you are not regularly ingesting a depressant. I know how obvious this sounds but I had never thought of it in this way. Who knew? While enjoying this new frame of mind the thought of having a drink begins to feel a bit silly. Pointless even. Absolutely not worth the hassle. 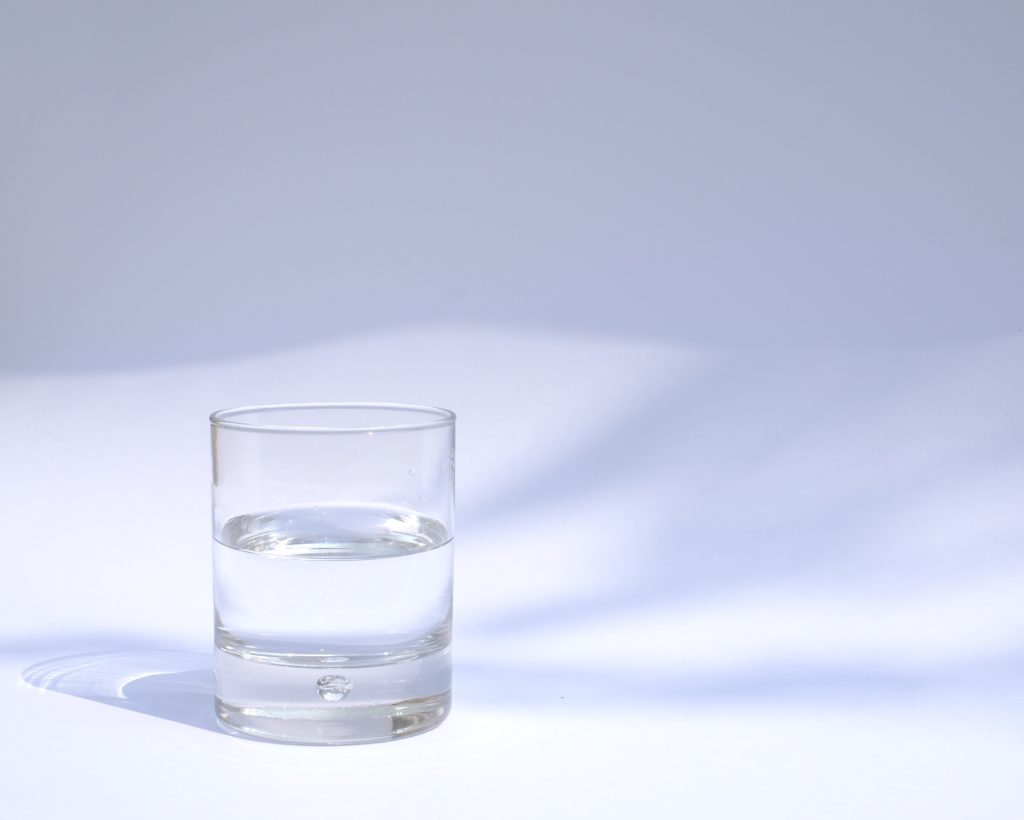 But I have found it incredibly hard to not drink in another, much more deeply held and profound, way that I was not expecting. Not drinking entirely feels like a kind of betrayal. And not in a flimsy way. In the sense that to stop means a betrayal of a huge part of my identity. An unspoken criticism of those I love around me and of the life I have lived so far. ‘Not drinking’ is a kind of shroud that those around me are discomforted by. Not in an overt way, but you can see the disappointment in the faces of those you meet when you tell them you are not drinking. They briefly reflect on something in their own heads and then smile and shrug it away. Or you have a brief conversation where they agree with you but then they carry on slugging their beer before checking ‘if you’re sure’ you really don’t want to join them. This is because booze is really about displacement. Drinking is actually about saying ‘it’s nice to see you and I’m in a good mood and there are lots of things worrying me at the moment drinking allows me to forget briefly. Please don’t suggest I have a dependancy problem and ruin it for me.’

As a result of this I have come up with the unifying theory of alcohol. That sounds a bit grand when it’s actually very simple. But unifying theories usually are. This theory has drastically reduced my drinking but it has not stopped me drinking completely. It required a shift in perspective that has changed my behaviour, instead of it being the other way around.

Up until now I used to feel I either had to be drinking, or not be drinking. There was nothing in between the two. I either had to be up for a massive session or not be drinking at all. And apart from the few times I have stopped completely, the assumption has always been towards drinking. So if I wasn’t sure what I wanted to do I would drink, and drink too much more often than not. Now I’ve set the assumption the other way around. I work on the assumption that I don’t drink, but occasionally I do. So I haven’t drunk that much since the start of December even though I have stopped not drinking, but if I go into a pub and they have my favourite beer on tap (Timothy Taylor Landlord since you ask) then I have decided I will have a few pints. If they don’t then I won’t drink. And because I have a young family I rarely have time to go to a pub anyway. My other shift in perspective is about why I drink alcohol, and this is what gives me the confidence to say this is a new way of living for me even though I’ve only been doing it for a few weeks.

I’ve realised that booze can be great fun, but it’s useless as a weight-bearing exercise. By that I mean it can’t cope with carrying a burden. So if you’re drinking as a compensation or as a reward it collapses under the weight of this expectation and makes you feel shit. You either behave badly and then feel shame and regret in the morning or you just wake up with your feeling of gloom amplified. If I want a drink because I’ve had a hard day and ‘deserve’ a drink, or if something bad has happened and I want a drink to ‘escape’ from it then I don’t drink. Ever. That is the rule. You can only have a beer that is just a beer. When you are not drinking it for any other reason than it tastes nice. 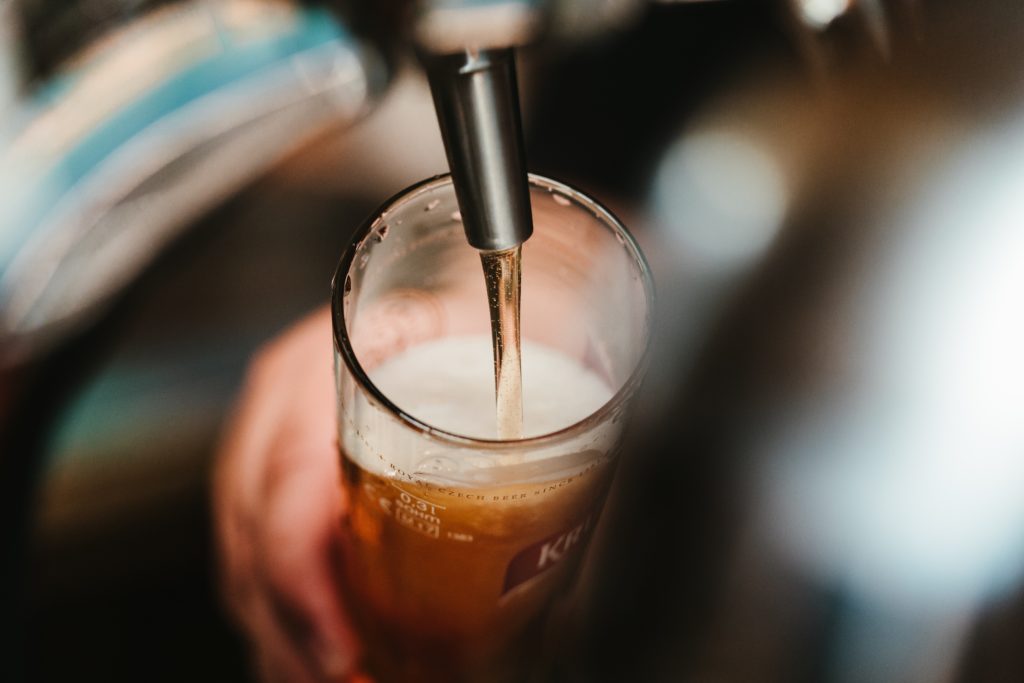 You’ll be able to tell if it’s ‘just’ a beer if you can take or leave drinking it. If you’re not bothered either way then you can have it. But you could equally decide not to, and this is why I will rarely drink any more. Because at that point I will start to think about one beer becoming three and how I will feel in the morning and quickly decide I can’t be bothered.

But if I’ve spent a few hours walking in the woods and I’m feeling lovely inside and I come across a pub that has Tim Taylor on draft then yes. Oh yes. I’m having a pint then. I might even have two. But other than that. No. I’m fine thanks. And don’t feel bad if you’re drinking and I’m not. Just remember that if I’m out drinking orange juice in a pub with you then I must really want to be there and hang out with you. I must actually want to talk to you. Because you’ll know I’m not there for the booze.

(This is an extended piece about an idea included in my latest book, The Surfboard). 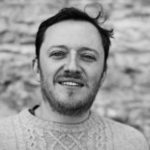 Dan Kieran is Co-Founder & CEO of Unbound. He is the author of twelve books including The Idle Traveller. He is a travel writer for The Guardian, Observer, Times, Telegraph and Die Zeit. He presented a BBC Radio 4 programme about the month he spent driving across England in a 1957 vintage milk float and gives talks on entrepreneurship, creative writing and how to have ideas. His latest book is 'The Surfboard'.
@dan_kieran
Tags :
Essay Alcohol beer drinking Dry January sober