read on
Photo by Amaury Gutierrez on Unsplash

By Pete Langman
Q&A | 5 minute read
Pete Langman on writing in a pub, with Parkinson's, two-fingered, and often about pie

Everywhere. I wrote the first draft of Killing Beauties in a beach house in Florida in January 2018, mostly on the sofa but sometimes in bed or at the dining table (depending on how my back was holding out). I often write in pubs and cafes, as I find that the background noise helps me to form a barrier against reality so that I can more easily stay in my fictional world. I have been known to seek out environments similar to scenes I’m writing, as well, though ultimately I’m not sure whether I write about pie because I’m eating it or eat it because I’m writing about it. I think it depends on the pie.

The last great book I read was Joseph Conrad’s Heart of Darkness, the last really good one was In the Mouth of the Whale by Sjon: the former seems to get better and better, while the latter is littered with simply staggering prose. As for theatrical performance, I spent some time as a sound engineer in the theatre which means I often have too much knowledge of the form to suspend disbelief, but I don’t think anything has come close to the impact of the Royal Opera House’s 2013 production of The Wasp Factory by Iain Banks.

My mother tells a story of how she was speaking to the headmaster after I’d had my interview and he remarked how surprised he was that I couldn’t read (in the entrance examination I had scored eight per cent in the english paper and 100 per cent in maths. I was seven years old). She asked him how he had come to such a conclusion and he replied that he had asked me what I thought of Biggles and I’d looked at him blankly and said ‘Who’s Biggles?’ I read history books and encyclopaedias. If there was one book, I’d probably have to point at The Birds of the British Isles in some incarnation.

I decided to take the reading and writing thing more seriously. It got seriously out of hand

I wasn’t inspired by any book, specifically. I became a writer almost by default. I was a professional guitar player through the 90s and in 1995 I was asked to write a monthly column for Guitar & Bass Magazine and within a couple of years I realised I enjoyed writing the prose for it more than the music. I decided to take the reading and writing thing more seriously. It got seriously out of hand.

Ha! You’ve obviously never seen my handwriting. It’s always been appalling, and I’ve written exclusively in block capitals for over 20 years. Since my diagnosis with Parkinson’s, however, it’s degraded even more. One of the many symptoms that have decided they have nothing better to do than attach themselves to me is called micrographia: tiny handwriting. It’s one of the many warning signs. My cursive script is now so bad that even I cannot read it, and one of the many skills I still use in academia is palaeography, the reading of old handwriting. I can decipher secretary hand from 1605 but not my own handwriting from five past four this afternoon.

Having said that, I type with two fingers and one thumb (though mostly with the one finger. It’s labour-intensive).

I read very little these days, other than things I’m writing or editing, but that is an active process which is very different from plain reading. I find the rhythm of reading puts me to sleep with remarkable speed (other than at night, when I’m too tired to focus), but Heart of Darkness I have read several times, and the same goes for a whole host of other books. Of course, having completed a BA, MRes and PhD in literature and subsequently teaching for several years at university means that I have clocked up a lot of second, third, fourth and fifth reads.

I’ve been known to utter the cry of the overworked lecturer: ‘Read it? I haven’t even taught it!’

Vicious question. Dickens must be the master of both. Great Expectations has a beautifully flawed hero in Pip, Magwitch fits neatly into both categories, and Estella is arguably a great villain. Daniel Quilp (The Old Curiosity Shop), Rogue Riderhood and Jenny Wren (Our Mutual Friend): two great villains and a heroine of distinction.

Define local. Spiritually it’s probably Lambeth House Library. In the old days (until a year or two ago) its entrance was a door in a wall on Embankment. You rang the bell and someone would walk across the quad to let you in. Back then the first time you went you’d walk past three or four times muttering ‘It must be this door’ to yourself while summoning up the courage to ring the bell. It has a big sign next to it now. Ruins all the fun. Geographically it depends on where I’m living, but it’s been a while.

I’ve lied about writing a few but never about reading any. Having said that, I’ve been known to utter the cry of the overworked lecturer: ‘Read it? I haven’t even taught it!’

An author gets into an elevator with a publisher. It’s a murder mystery. Oh, that’s my next one. The book that’s coming out is this: two women spies in 1650s England attempt to spy on Cromwell’s spymaster.

I think the pitch needs to be short enough to finish before the victim even knows what’s happening.

Killing Beauties by Pete Langman will be published by Unbound on 23 January 2020. 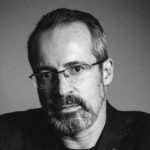 Academic, editor, cricketer and sometime rock and roll guitarist, Pete played guitar onstage with a worldwide heart throb (twenty years after they were in their prime), mixed sound for a show involving dancing snowmen, was thrown out of military academy, and painted houses before settling down with a nice book and a glass of single malt. He holds a PhD on Francis Bacon (the other one) and was diagnosed with Young Onset Parkinson’s Disease at 40, since when he has published Slender Threads: a young person’s guide to Parkinson’s disease and The Country House Cricketer. His writing has appeared in publications from The Guardian to Guitar & Bass Magazine. He teaches early modern things at Oxford, edits them in the Netherlands, and cooks a mean puttanesca. His proudest hour was being interviewed on Test Match Special. He lives between Leiden and Brighton with his partner Dr. Nadine Akkerman, the award-winning author of Invisible Agents, who supplies him with extra historical expertise and keeps asking if they can have a cat now, please.
Tags :
Q&A micrographia Parkinsons's writing