read on
Photo by Debby Hudson/Unsplash

Finding my father, in letters

Some family stories linger and expand with the weight of time and the unquestioned assumptions of truth our entire lives, and we never even think to look into them. Because to question our stories is painful – it means looking into the past and it means facing disappointment. It’s better just to close the box.

My father was a ‘failure’ and apparently left everything ‘unfinished’ when he died. This was a family story embedded so deeply under my skin that whenever anyone asked about my dad I’d brush them off with a dismissive ‘I never knew him’, hoping they wouldn’t ask me for any more details.

And then a woman in Paris named Coralie wrote to me on Facebook.

It had been such an awful week, which is why I was on edge, clicking very quickly on her message, sensing some kind of impending doom. The ménage of awful that week had included a trip to the hospital’s emergency department, a friend’s mother’s funeral and my neighbour threatening to kill me. But the funeral had been the strangest element of a week filled with reminders of mortality, and perhaps it’s why I responded so quickly to Coralie.

As I’d listened to the children give an overview of their mother’s life at the funeral, along with times, years and her relationship with their father, I felt envy, which is a strange thing to feel at someone’s funeral. I felt envious that they could put their parent’s story together so neatly.

I’d never known my dad. He and Mum separated when I was six months old, and he died when I was six. I gathered, from the silence around his life, that he’d done something wrong – Mum had chosen to leave him, and he’d been much older than her. I don’t have any photos or memories of them together, or looking even remotely romantic, and as a child I’d stumbled across an obituary printed in Dad’s high school alumni magazine which said that he never ‘finished’ anything. I forgot all the rest, and in some hidden part of my psyche, I associated that with the reason for the silence around his life.

Dad had grown up in a different era to my mum, too, being born twenty-seven years before her, in 1920, so it wasn’t like I could ask any of his peers. They, too, had mostly died or were very elderly by the time I was an adult. Mum and Dad had met when she was twenty-one, a student at the university where he was working in the history department on a research grant. I never knew why she was drawn to him, or why she chose to have three children with someone that I gathered was just a ‘failure’, leaving everything ‘unfinished’ when he died suddenly, of cancer, in 1984.

But Coralie – a stranger in Paris, who looked almost the same age as me, in my late thirties – seemed to be describing a completely different man to what I’d always thought my father to be.

She wrote, explaining that her grandmother, Michelle, had died just the night before, and they had found a stack of letters in her Paris apartment, written about an Australian man she had met on a train in London, in 1949.

Was I any relation to this man – Denison Deasey?

Family stories and secrets – even when they could possibly be good – threaten some part of our survival. Could I believe this seemingly surreal story?

I temporarily lost my breath, forgetting the screams coming from my neighbour downstairs. My life was imploding, but I couldn’t figure out if it was good, or bad. Because family stories and secrets – even when they could possibly be good – threaten some part of our survival. Could I believe this seemingly surreal story?

I was thirty-seven, and, consciously or otherwise, I’d built my whole life on a vision of my dad as this shadowy, down-on-his luck figure. A sick, aged man, a failure, an amateur; even the book he’d been writing when he died was left ‘unfinished’. 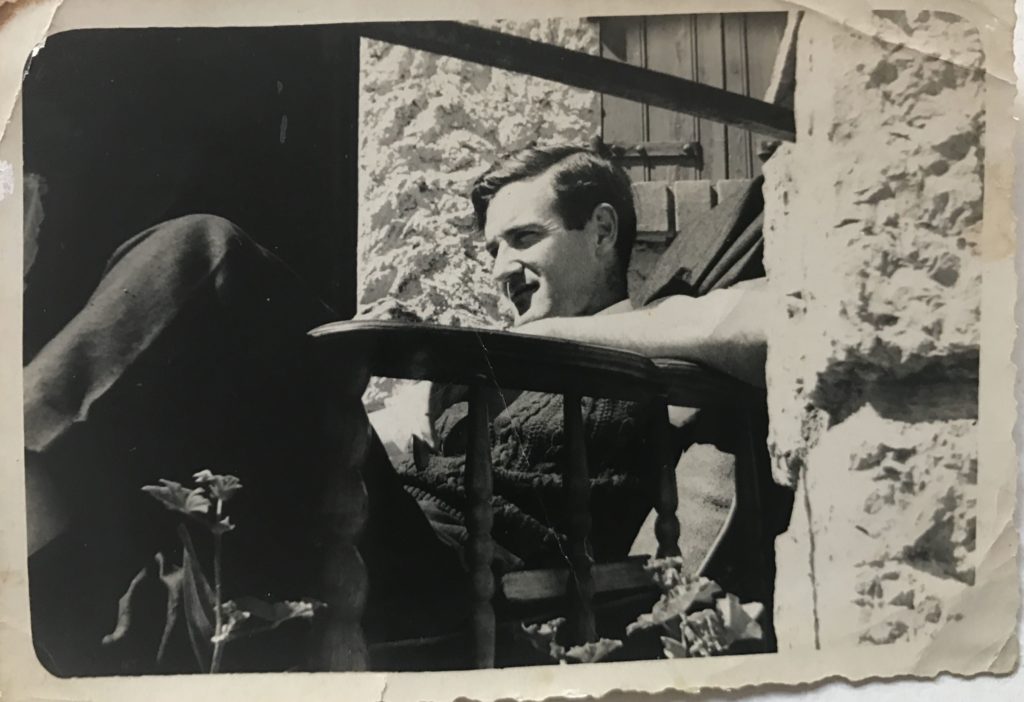 After I had composed myself enough to reply that yes, Denison was my father, Coralie sent me a link to the letters, which her cousin had begun to transcribe onto a blog, in French. I spent the rest of the hot night pasting everything into Google translate, and I saw a figure emerge. A man who was nothing like that person I’d always assumed my father to be.

The ‘Denison’ described in these letters was dashing, intelligent, interesting, fun. He took Michelle around London in 1949, he showed her Westminster Abbey and gained access to the Coronation Chair through his ‘connections’, he was a member of a club on Pall Mall, he got her a good seat when King George and Queen Elizabeth went past in the parade. They lunched in London City and floated sailboats on the pond at Hampstead Heath, and she loved how he played the piano and sang.

He’d worked as a journalist, apparently, and also studied music and took Michelle to the National Theatre. She described seeing photos of his family, and also meeting his sister, who was living in London at the time. He’d fought in the war and could speak about it very well, she wrote. He was tall, blue eyes, very good-looking. She was smitten.

A story of my dad, his story, which is my story, my hidden history. One half of my DNA. Who he was as a young man

I had never known my dad had fought in the war or where or when. I had once tried to look at his army records but found the handwritten entries so confusing and dated (and I possessed so little knowledge of the Australian contribution to the Second World War) that I couldn’t fathom how he could have ‘served’ without leaving the country. But he had, and he’d told Michelle about it.

Michelle, originally from Paris, had travelled to London as an au pair and was only twenty-one at the time. The same age my mother was, when she met Dad. Her letters filled something inside me that I hadn’t realised had been empty my whole life – a story of my dad, his story, which is my story, my hidden history. One half of my DNA. Who he was as a young man.

Reading that he’d studied journalism, loved music and cut such a dashing figure wooing a Frenchwoman around London in 1949 made my heart swell with pride. This woman – Coralie’s grandmother – had apparently held on to these letters for the rest of her life. And since 1984, when she divorced her husband (she had broken off the affair with my dad, on her own father’s wishes), she had been speaking of ‘Denison’ to her children and grandchildren and how she wished she had made a different decision.

That I had experienced silence since Dad’s death – also in 1984 – but a woman in Paris had, apparently, been talking about him for over thirty years overcame me. The space between us – Australia and France – and the space between the two stories of my dad was too much to take in. I had to find something to give back to this family – by sending me the letters, they had no idea of the gift they’d given me: the clearest and first ever impression I’d had of my father as a young man. And I liked who I saw.

After Coralie’s messages, I went to the State Library Victoria, because I knew they held some of Dad’s diaries. I assumed the papers were there because he was close friends with one of Australia’s most famous modern painters, Arthur Boyd, and his diaries held records of Boyd’s earlier years.

I had only ever tried to look at the diaries once before, being so overcome by the pain inside the only ones I read – from 1981, when Mum had left him and he had begged her to return – that I never had the strength to go back. I thought that was all there was – records of pain, unfinished works, reminders of all those words I associated with my dad and fought to ignore my entire life: dilettante, failure, a man who ‘wasted’ his fortunes and his talents.

But when I went back to the library after Coralie’s email, searching for those from 1949, another man met me entirely. This was the man Michelle had described: a man who’d boldly ‘escaped’ Australia to make a new life in London and France after the Second World War, moving in fascinating circles with other bohemians and ex-pats, with a deep feeling for the arts.

He wrote dozens of manuscripts, kept hundreds of diaries, even translated an entire book into English for a German man as a ‘favour’. This was not the father I had always assumed was hidden in those boxes.

After that first trip to the library, my research expanded every time I opened up a new page. From seven more library collections of material across the world, to forty photos of his life in the 1940s and 1950s I had never seen before, to over a dozen books which referenced him (some containing more photos I had never seen), it was like a never-ending research project, and it took me over a year.

It was enormous, processing my dad’s material. Just as that sad family story I’d grown up believing my entire life had weighed me down, the heaviness of changing it in my psyche was almost like turning a ship around. I spent night after night on long, extensive Google searches, compiling documents filled with various chronologies, unraveling certain myths and writing about them and how and why they weren’t true.

It wasn’t until I travelled to Paris and retraced my father’s footsteps in the city that he loved that the full truth of his life came to me (that mystery is revealed in my book). The letters Michelle left in her apartment in Paris were a gift, for without them, I’d never have had the strength to look into those boxes at the library. Coralie referred to the letters as Michelle’s ‘happiest souvenir’, saying that they used to find her re-reading the letters, humming the bars to an English song with a romantic smile on her face. I feel that Michelle left those letters in Paris as a parting gift – one that helped me to find my dad.

Louisa Deasey’s memoir, A Letter from Paris, is published by Scribe. Click here to buy 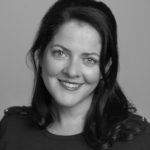 Louisa Deasey is a Melbourne-based writer who has published widely, including in Overland, Vogue, The Australian, and The Saturday Age. Her first memoir, Love and Other U-Turns, was nominated for the Nita B. Kibble Award for women writers. Her latest book is called A Letter from Paris (Scribe).
@louisadeasey
Tags :
Essay Fathers Letters