How to anaesthetise the human condition

By Jo Johnson
Q&A | 4 minute read
Jo Johnson on the value of books, libraries and a good cafe

I write anywhere. I travel around visiting clients and so I am often drafting ideas standing in a cafe queue or sitting on a train. I also write in my head whilst I’m driving, hence my driving is not very good. A lot of Surviving Me was written in the cafe over the road from my office, where I first spotted a lonesome middle-aged man and thought he’d make a great starting point for a novel.

I loved Me Before You by Jojo Moyes. The film of this book made me proper cry, shoulders shaking, snot pouring! More recently I was inspired by Bohemian Rhapsody, the film detailing Freddie Mercury’s life. This line from the film stayed with me: ‘Being human is a condition that requires a little anaesthesia.’ Most people who come to see me as a clinical psychologist request help because whatever anaesthetic they have been using is no longer working. Often though it’s things like overwork, excessive eating or avoidance rather than drugs that people use to numb emotional pain.

I loved Enid Blyton’s Famous Five and Secret Seven but always identified with the strong females rather than the ones who made the tea. I am still incompetent at anything even vaguely domestic.

This sounds odd but I’m not sure reading inspired me to write. Even as a teenager I spent a lot of time making up stories. My parents called it lying but it was the start of making up elaborate plots for myself and others. I wasn’t an especially happy child and I think it formed an escape. Interestingly, my sixteen-year-old writes at least a few stories each week. I hope she’s not unhappy! I didn’t intend to write a book but the story of Tom kept growing until it was a novel.

Sometimes I jot down notes using pen and paper but mostly I write on my phone or iPad as they are always accessible. As a result I’ve spent a fortune on physiotherapy and a chiropractor.

I have only re-read one book, The Woman in White by Wilkie Collins. I have a very low boredom threshold and constantly jump from one thing to the next, which is perhaps why I don’t like to revisit books I’ve read. I’m more likely to watch a good film repeatedly.

As a teenager I loved Gone With the Wind and Rhett Butler. When I was growing up I was terrified of a TV villain called Anthony Falconetti, who I had nightmares about for decades. Bizarrely I have no idea what the programme was so if anyone remembers, it might help me with my virtual PTSD.

Last week to ask if they’d like a copy of my novel, Surviving Me. I used to take my four children most weeks as it was warm and a good place to kill an hour. More recently I’ve neglected my local library. When I was there chatting about my book, I remembered that libraries are an amazing community resource and vowed to return for further exploration.

I’ve always been proud of being a nonconformist so unashamedly tell people I’ve read few classics. This horrifies my second son, who at twenty-three has spent the last couple of years steadily reading as many classics as he can find. He has just finished Great Expectations, which I read at school and found very boring.

Deceit has a certain allure when your life doesn’t match up to the ideal of what it means to be a modern man. Tom has decided he doesn’t want to live, Adam wishes he had that choice.

Surviving Me by Jo Johnson is published by Unbound. 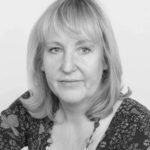