read on
Photo by Jan Kahánek on Unsplash

A writer’s life of two halves

By PJ Whiteley
Q&A | 3 minute read
PJ Whiteley on journalism, writing by hand and reading Camus in the original French

I have an office in Leeds that I mostly write in. It’s Castleton Mill, a wonderful shared space for creative freelancers by the canal. When I work in my apartment I tend to sit up on my bed.

The last really good book I read was Butterfly Fish by Irenosen Okojie. It has a dual narrative between Benin in the 19th century and London in the present day, with an artefact that links the two worlds – I loved the way this theme was handled. The magical realism and lyrical language were beautiful.

The best film I’ve seen relatively recently was The Big Sick; I love a blend of depth and humour in a drama

I loved Orwell’s dazzling clarity, the pursuit of truth, the principle of honest testimony over and above loyalty to any tribe

There were many. I enjoyed funny books, but perhaps the one that marked me most was the Second World War drama The Silver Sword, by Ian Serraillier, the story of child refugees walking from Poland to Switzerland. It was epic, haunting and beautifully told.

Probably the collected essays of George Orwell. I was a journalist first, novelist second. I loved the dazzling clarity, the pursuit of truth, the principle of honest testimony over and above loyalty to any tribe.

I do both. I worked so long as a journalist that I’m a very fast typist, so my productivity on a laptop is good. But for variety, now and then, I like to pen ideas and sketches for works in a notebook, especially on a camping holiday when I like to be digital free.

I do occasionally re-read books. My favourite novel is La Peste, by Albert Camus, which I’ve read twice in English and once in French. I undertook a two-week residential course in French in part to prepare me to read the original.

Sydney Carton is perhaps the most inspiring hero, because he was so dissolute for much of the story. As for villain, perhaps the most frighteningly compelling was the psychopath-painter Juan Pablo Castel, central character in El Túnel, by Ernesto Sabato, an existentialist classic.

I’ve read La Peste, by Albert Camus, twice in English and once in French. I undertook a two-week residential course in French in part to prepare me to read the original

I visited the Leeds Library last Saturday, for some readings. Does that count? It’s not technically my local lending library; it’s actually a tucked-away historical gem, one of the oldest in England. I was a member of my local library before moving recently but haven’t visited the new one yet.

I think I can say I haven’t lied directly, but I’ve maybe given the impression I’ve read War and Peace when in reality I’ve just seen the two TV adaptations.

My new book is called A Love of Two Halves. It’s the drama that follows when a wealthy entrepreneur falls for a single mum on minimum wage in modern Britain. It’s realism but can feel a bit like sci-fi as they inhabit quite different planets.

A Love of Two Halves by PJ Whiteley is published by Unbound. 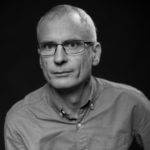 P.J. Whiteley was born in Bradford, West Yorkshire in 1962, but attended schools in different parts of the UK. He has been a professional writer since summer 1988, working initially in trade magazines. Since 1997 his journalism, and latterly non-fiction titles, have been on the subject of business management, with a focus on research that supports an enlightened alternative to treating people as ‘resources’. His first novel, Close of Play (Urbane Publications, 2015) was described by the Church Times as ‘well written and above all well observed’. Marching on Together (Urbane, 2017) received a cover quote from Louis de Bernières.
Tags :
Q&A Camus Orwell Tolstoy writing