Banks in search of Terra Incognita

By Katy Guest
Extract, In pictures | 9 minute read
250 years ago, Captain Cook set sail in search of Terra Australis Incognita, stopping in Tahiti to observe the transit of Venus on the way. In these extracts from his journals, ship's botanist Joseph Banks describes their progress

Journal of Sir Joseph Banks on Captain Cook’s First Voyage round the World in H.M.B. “Endeavour”, 1768-71

25th After having waited in this place ten days; the ship, + everything belonging to me being all that time in perfect readiness to sail at a moment’s warning, we at last got a fair wind: + this day at three o’clock in the Even weighed anchor, + set sail, all in excellent health and spirits, perfectly prepared, (in mind at least) to undergo with cheerfulness any fatigues or dangers that may occur in our intended Voyage.

26th Wind still Fair, but very light breezes. Saw this Even a shoal of those fish which are particularly called Porpoises by the seamen, probably the Delphinus Phocoena of Linnaeus, as their noses are very blunt. 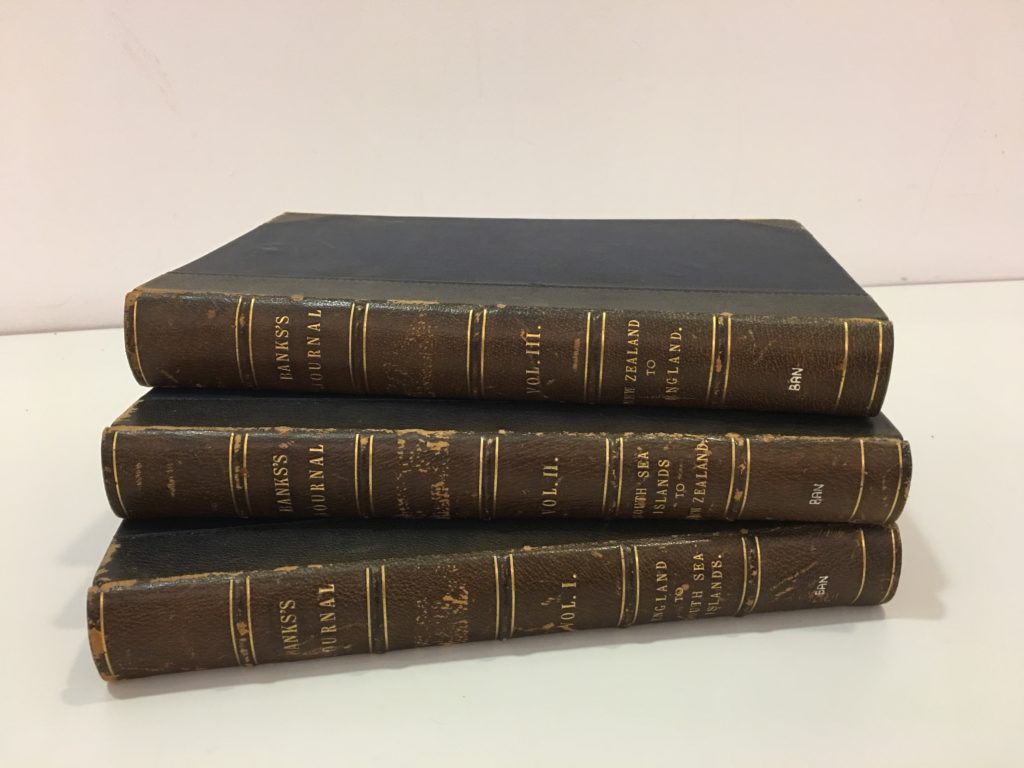 Sept 10th Today for the first time we dined in Africa and took leave of Europe for heaven alone knows how long, perhaps for ever; that thought demands a sigh as a tribute to the memory of friends left behind + they have it, but two cannot be spared, ‘twould give more pain to the sigher than pleasure to those sighed for; tis enough that they are remembered: they would not wish to be too much thought of by one so long to be separated from them, + left alone to the mercy of winds and waves.

Dec 25th Christmas day: all good Christians, that is to say all good hands got abominably drunk, so that all through the night there was scarce a sober man in the ship. Weather, thanks God, very moderate, or the Lord knows what would have become of us.

1769. March 13th [Tahiti]. This morning early we came to an anchor in Port-royal, by King George-the-Third’s Island. Before the anchor was down we were surrounded by a large number of canoes, the people trading very quietly and civilly, chiefly for Beads, in exchange for which they gave Cocoa nuts, both roasted and raw, some small fish and apples… 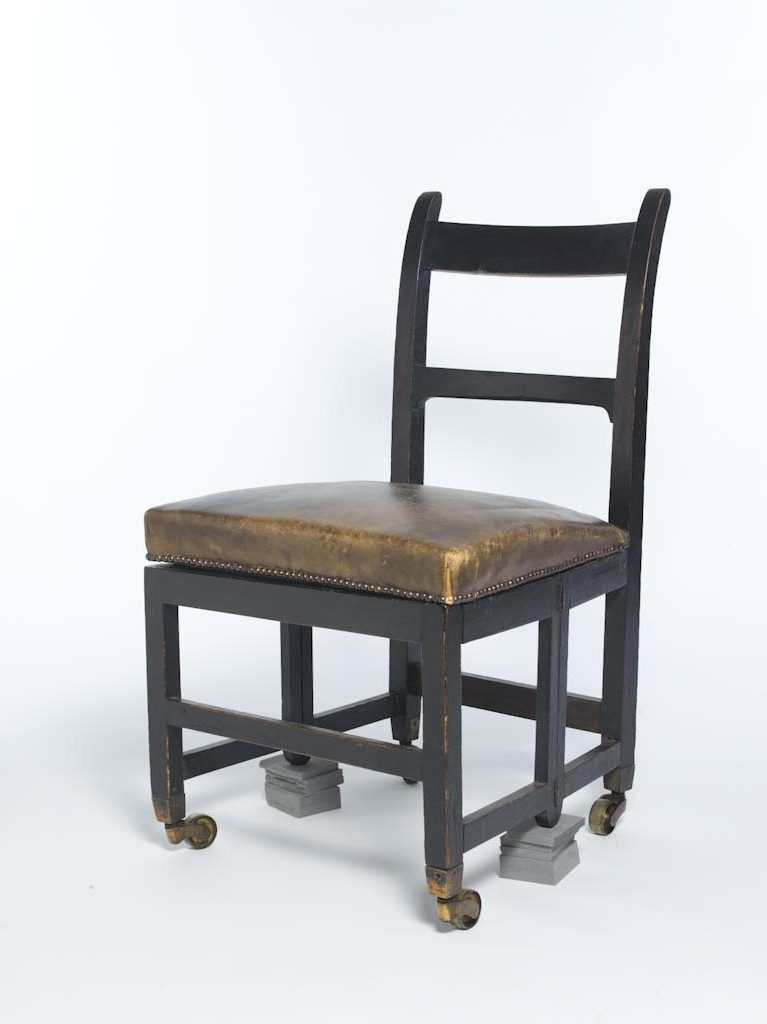 Aug 2nd Dr Solander and myself have spent the day ashore [on Ra’iātea, now in French Polynesia] and have been very agreeably entertained by the reception we have met with from the people, though we were not fortunate enough to meet with one new plant. Everybody seemed to fear and respect us, but nobody to mistreat us in the smallest degree. Men, women + children came crowding after us, but no one shewed us the least incivility; on the contrary, wherever there was dirt or water to pass over, they strove who should carry us on their backs. On arriving at the homes of the principal people we were received with a ceremony quite new to us: the people, who generally followed us, rushed into them before us, leaving however a lane sufficiently wide enough for us to pass through. When we came in we found them ranged along either side of a long mat spread upon the ground, at the end of which sat one or more very young women and children, who without stirring expected us to come up to them and mark them presents, which we did with no small pleasure, for prettier children or better dressed we had no where seen. One of these Jettuas, as they were called, was about six years old, her apron or gown was red, around her head was a large quantity of Jasmin plaited hair, an oinament they value more than anything they have. She sat at the end of a mat 30 feet long, on which no one of the spectators presumed to set a foot, notwith-standing the crowd. She was leaning upon the arm of a well looking, well dressed woman of about thirty, possibly her nurse. We walked up to her and as soon as we approached she stretched out her hand to receive the beads we were to give. Had she been a princess royal of England giving her hand to be kissed, no instructions could have taught her to do it with a better grace; as much is untaught nature superior to art, that I have seen no sight of the kind that has struck me half as much. 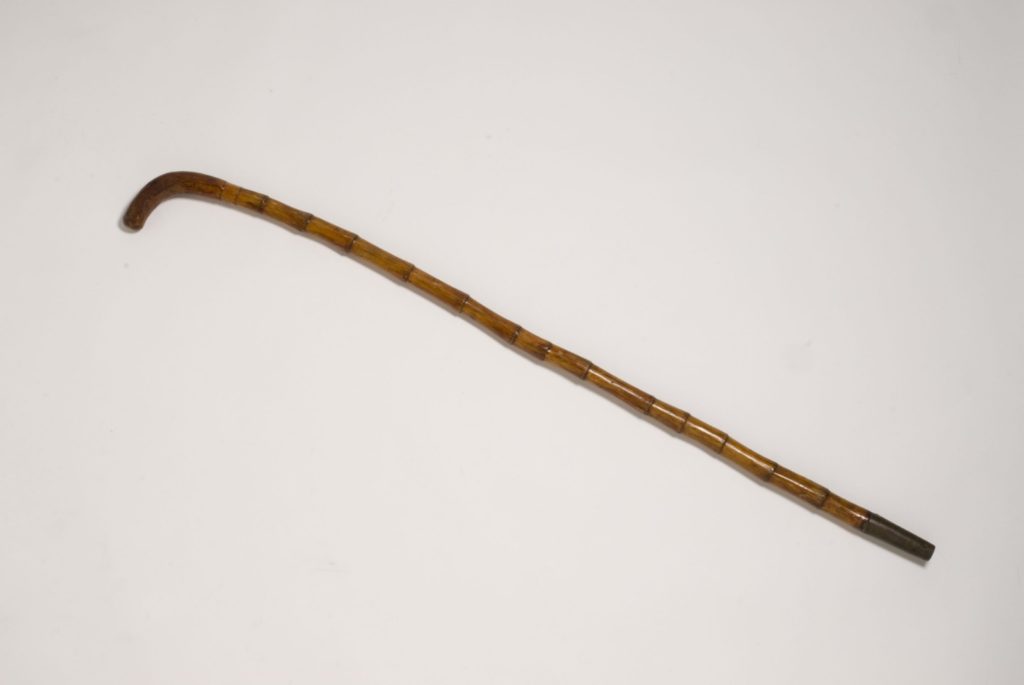 1770. April 19. With the first day light this morning the land was seen, at 10 it was pretty plenty to be observed, it made sloping hills covered in part with trees or bushes, but interspersed with large tracts of sand. At noon the land much the same, we were sailing along shore five or six leagues from it with a brisk breeze of wind and cloudy unsettl’d weather, when we were called upon deck to see three water spouts which at the same time made their appearance in different places, but all between us and the land. Two, which were very distant, soon disappeared: but the third, which was about a league from us, lasted fully a quarter of an hour. It was a column which appear’d of the thickness of a mast or a middling tree, + reach’d down from a smoke-coloured cloud about two thirds of the way to the surface of the sea. Under it the sea appeared to be much troubled for a considerable space, and from the whole of that space arose a thick mist reaching to the bottom of the pipe, where it was at its greatest distance from the water. The pipe itself was perfectly transparent, and much resembled a tube of glass in a column of water, if such a thing could be supposed to be suspended in the air. It very frequently contracted and dilated, lengthened and shortened itself + that by very quick motions. It very seldom remained in a perpendicular direction, but generally inclined either one way or the other in a curve, as a light body acted upon by the wind is observed to do. During the whole time that it lasted smaller ones attempted to form in its neighbourhood; at last one almost as thick as a rope formed close by it, + became longer than the old one which at that time was in its shortest state upon this they joined together in an instant and gradually contracting into the cloud disappeared.

20. The country this morn rose in gentle sloping hills which had the appearance of the highest fertility: every hill seem’d to be cloth’d with trees of no mean size: at noon a smoke was seen a little way inland, + in the evening several more.

21. In the morn the land appeared much as it did yesterday, but rather more hilly. In the Even again it became flatter, several more smokes appeared from which we concluded it to be rather more populous: at night five fires.

22. The Country hilly but rising in gentle slopes and well wooded: a hill was in sight which much resembled those dove houses which are built from a square with a small dome at the top. In the morn we stood in with the land near enough to discern five people who appeared through our glasses to be enormously black: so far did the prejudices which we had built influence us that we fancied we could see there colour when we could scarce distinguish whether or not they were men… It has long been an observation among us that the air in the southern hemisphere was much clearer than in the northern. These last few days at least it has seemed remarkably so. 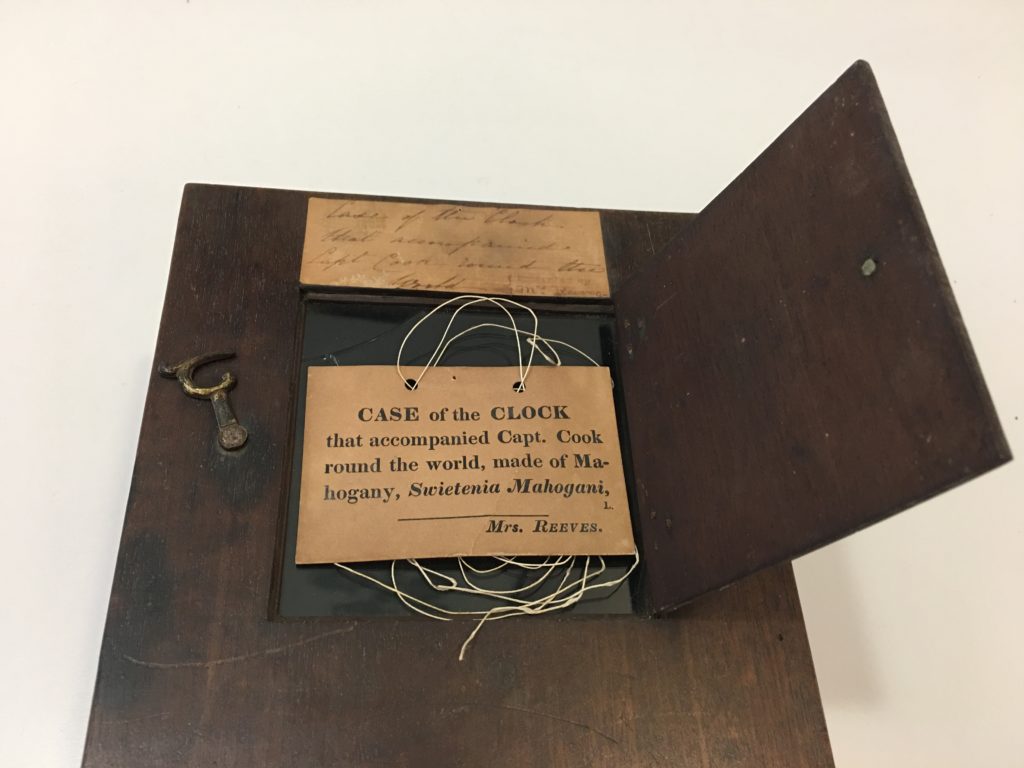 1771. June 18. Saw 3 New England Schooners cruising for Whales: sent a boat on board one who told us that he had yesterday spoke an outward bound Englishman, who told him that all was peace in Europe, & that Spaniards had agreed to pay the Manilla ransom with interest in one year, & a million of Dollars for damages done at Falkland’s Islands.

The vessel had by their own account been out 5 weeks and caught nothing: they had chas’d a Whale 60 leagues into Fyall harbour, into which they could not follow it, as the Portugese suffer no Whaler to go into any of their ports in the Western Islands. They had, they said, no meat on board, but lived upon what they could catch: they sold us readily 4 large Albacores [tuna], saying that they could catch more. As for American news, King George they said had behaved very ill for some time: but they had brought him to terms at last.

20. Saw a large ship ahead, which on our lowering our fore topsail, hoisted a flag at her main topmast head: she soon however made sail and left us.

21. About noon we discovered of 13 sail of large ships on our weather quarter: these we doubted not were new consorts, the India fleet. One Shearwater was seen.

22. The Fleet held so much better a wind than us that they fairly went out of sight to windward of us; who indeed had split both our top gallant sails in a squall.

23. Wind very foul: saw one Shearwater: the reason of so few having been seen this passage, may be their breeding time they do not wander far out at sea.

30. Both yesterday and to-day a few Shearwater were seen.

July 4 in the night: many were about the ship crying very much.

My Bitch Lady, was found dead in my cabin, laying upon a stool upon which she generally slept: she had been remarkably well for some days, in the night she shriek’d out very loud, so that we who slept in the great cabin heard her, but becoming quiet immediately no one regarded it: whatever disease was the cause of her death, it was the most sudden that ever came under my observation. Many Shearwaters were seen about the Ship.

5. In the night the ship pass’d through a shoal of Macarels, + in the morning many Crabs, + some sea weed was observed with many Shearwaters.

6. Several Shearwaters and one Gannet were seen. Much seaweed like tape flattish and narrow.

7. Several Shearwaters and much Tape weed: the water a little discolour’d. Caught Lepas Cygnifera [barnacles], floating upon the water, in round congeries [jumbles] some of which were large enough to fill a man’s hat.

8. Calm: went in boat and shot Fulmar [a type of sea bird] + Manks Puffin, of Pennant’s British Zoology: much seaweed but no more Lepades.

10. This morning the land was discovered by young Nick, the same boy who first saw New Zealand: it prov’d to be the Lizard. 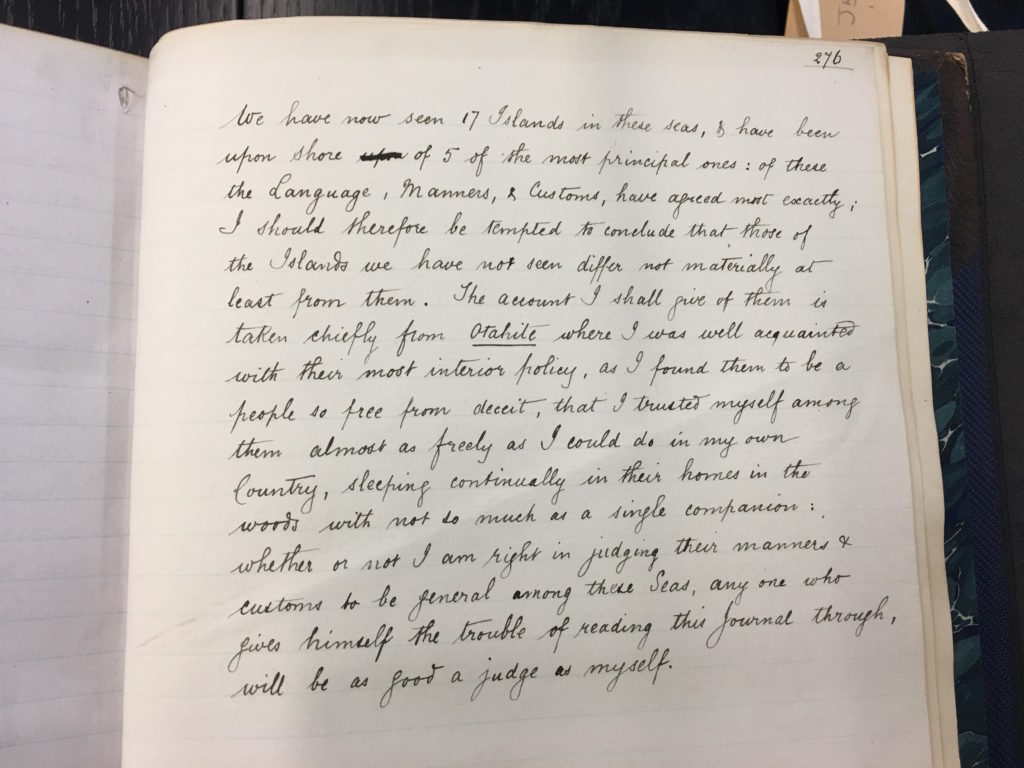 A page from Joseph Banks’s journals. Photo by RBG Kew

Joseph Banks‘s journals 1768-1771 are held in in the State Library of New South Wales; this transcript is from a manuscript copy made by Miss Turner (the aunt of the former Kew Director Joseph Hooker) in the nineteenth century, which forms part of the Banks papers kept at Kew Gardens. All the artefacts pictured above are kept in the Kew archive.

Find out more about Kew’s library, art and archives here.

Katy Guest is a commissioning editor at Unbound and contributing editor to Boundless. She also works as a freelance reviewer, editor, journalist and events chair. She was the literary editor of The Independent on Sunday for seven years, and a journalist at the Independent titles for 18. Katy has judged prizes such as the Aesthetica short story award, the Desmond Elliott Prize and Fiction Uncovered. She writes for publications including the Guardian, the TLS, the-pool.com and Mslexia.
Tags :
Extract In pictures Australia Captain Cook Joseph Banks Kew Tahiti

Which spice cost thousands of lives, and how to eat a persimmon

By Christina Harrison and Tony Kirkham

Life without the bump

Does childlessness always have to lead to existential crisis for women?