read on
Photo by Jeremy Bishop on Unsplash

Delayed rays of a star

By Amanda Lee Koe
Q&A | 7 minute read
Amanda Lee Koe's novel follows the hidden lives of Marlene Dietrich, Anna May Wong and Leni Riefenstahl - three women captured in one photograph at a party in Berlin in 1928. In this interview, she discusses the murky world her characters navigate, the way their choices will be interrogated, and how much has really changed

Delayed Rays of a Star tells the story of three significant women. Can you tell us who they are and how you first met them?

Delayed Rays of A Star follows the interconnecting personal and political destinies of Marlene Dietrich, the bisexual German-American screen goddess who was one of the highest-paid Hollywood stars in her day; Anna May Wong, the first Chinese-American film star to achieve acclaim in Hollywood as well as internationally; and Leni Riefenstahl, the German dancer, actress and director of, among others, the infamous Nazi propaganda film Triumph of the Will. I was in the photography aisle in the Strand bookstore in New York, looking for a Nan Goldin photo book, when I came upon an Alfred Eisenstaedt monograph with a picture of the three women on the inside. It was taken at a party in Berlin in 1928, when all three of them were still ingenues, on the cusp of fame.

The novel is very unusual for historical fiction in that it skips the part where Dietrich, Wong and Riefenstahl are at the peak of their fame and gives us only the self that the public didn’t see. Why is that?

Historical fiction tends to lean into protagonists at their peak for a simple reason: that’s what the general reading public can most easily connect with. The novel then needs to do less work to establish rapport with its readers, relying instead on recognisable tropes provided merely by its association with these public figures.

Fame is a veneer. The far more interesting bits of history are the passages that have gone unrecorded

Because I am a masochist, I wanted to go the hard way. I wanted to start from scratch with the reader and earn my keep — their trust and pleasure — on my own, as you would have to in pure fiction, instead of regurgitating period or biographical detail to reinforce the more surface things the reader already knows via pop culture, chaperoning the reader towards foregone conclusions.

I propose a variant model of historical fiction. Forget why these figures are famous, forget what you think you know them for. If I know it and you know it, why would I bother to write it? Fame is a veneer. The far more interesting bits of history are the passages that have gone unrecorded. My responsibility as a novelist is to show you something not only that a historian can’t, but something absolutely unique to me.

One of the most memorable characters is Bebé, the illegal Chinese immigrant maid looking after Dietrich in Paris. While migration is very much a theme in Delayed Rays, what inspired this more modern representation of it?

Migration is, indeed, a big part of this novel. Dietrich was an émigré artist, Wong a third-generation immigrant. I wanted to show a variety of moving bodies that were in motion for different reasons, across different classes. In Bebé’s case, there was an economic-existential reason for her initial movement, and she gets caught up in a larger human trafficking ring that exploits young women trying to leave China to work in Western countries. I was working on this novel from 2014 to 2018, which was also a fraught time during which migration and border control issues were constantly resurfacing, both in Europe and America. As an immigrant myself, the notion of who has the privilege to enter and exit where for what reasons is never far from my mind.

Identity is a slippery thing in this book, be it national or political, or the way in which women change so wholly in the public eye from being objects of desire to being older and trying to have lives outside of the male gaze. Why do you suppose we treat identity as static and fixed when it comes from so many different sources and changes through one’s life?

I think that flexible and lateral identities are a problem for statist bureaucracy and heterosexual norms. It is far easier to trick people into living a stable, quantifiable and controllable existence if they see their identities as static and fixed. The slipperiness of identity in Delayed Rays of A Star only appears as a function of the kaleidoscopic juxtaposition of the three women, and also because the reader is following their lives over an extended period of time.

It feels like Dietrich and Anna May Wong are icons of sorts; how did fascist ideologue Leni Riefenstahl end up in there?

Riefenstahl was in the Eisenstaedt photograph that began this novel; she could not not be a part of it just because I was worried about how to portray her: that is, how to be truthful and ethical around a deceitful and complicit historical figure, without falling back on everything that has already been said.

Nationalism is irrational. Doing the right thing does not mean that your countryfolk will read your morality into your actions

Riefenstahl is in a way, the antithesis of Dietrich. If Dietrich had je ne sais quoi, Riefenstahl had true grit. Where Dietrich was exuberant, Riefenstahl was disciplined. Riefenstahl had come up before Dietrich as an actress-director, and had calculated dreams of making it in America, but Dietrich ended up succeeding there, becoming an overnight sensation, whereas Riefenstahl failed. Dietrich was courted directly by the Reich’s Ministry of Propaganda but she refused them outright, became an outspoken opponent of the Nazi regime and served as a troop-morale entertainer in the US Army where she attained the rank of captain, yet legions of Germans never forgave her for marching on the side of the victorious Allies into a bombarded Berlin on the day the war ended. When Dietrich eventually returned to her beloved Berlin many years later, Germans came out with placards to show their displeasure at what they perceived to be her disloyalty. Nationalism is irrational. Doing the right thing does not mean that your countryfolk will read your morality into your actions.

Reading the darkly comic moments in which Riefenstahl reads the op-eds written about her dark Nazi past by Susan Sontag, looking at the world today, Trump and Brexit and the reinvention of the extreme right as ‘controversial’, do you think Riefenstahl would be welcomed back into the mainstream if she were attempting a comeback today?

I bet Trump would love to collaborate with Riefenstahl

I am glad you sensed the dark humour inherent to that section. Riefenstahl would be in a very interesting position were she to mount a comeback in our dystopic times. The mainstream — the American mainstream in particular — does love a redemptive comeback. I’m not comparing the two per se, but Monica Lewinsky, for example, came back with a fully-fledged anti-bullying campaign, informed by the vitriol she had been subject to over the course of the Clinton scandal. I think Riefenstahl’s entry point might be more via contemporary feminism, and less far-right nationalism. She has styled herself as the innocent, apolitical artist for too many decades to live down an abrupt about-turn, even if conservatives and xenophobes are prepared to support her.

I bet Trump would love to collaborate with her, simply out of vanity and hubris. Her epic-filmmaking style is much suited to egomaniacs, and she has a knack for branding, before branding was a thing. I could see her as the original ad-man, a one-woman show ad-man. In our world today she could probably set up a niche branded content film production company, where dictators and CEOs throw money at her to make them look grand.

Personally, I do believe that Riefenstahl was not lying when she said she was not a political person — but one does not need to be a card-carrying member of a political party in order to collaborate with and support them, and all the heinous things that they stand for. That said, one thing that I do find touching about Riefenstahl is that I believe that she truly loved making movies. Up until she was in her nineties, with no resources to make the epics she naturally gravitated towards, she made little documentaries about fish, with her cameraman boyfriend who was forty years younger. She was indomitable in that aspect.

You’re an award-winning writer, Delayed Rays of a Star was acclaimed in the States and went to number one on the Straits Times chart in Singapore when it was published there earlier this year. Has this recognition affected your path as a writer and if so, how?

I’m very grateful for these validations, but they are still ultimately external factors. My personal journey as a writer is guided much more by my relationship to the novel itself, and the relationship of the novel to readers. Everything else is a conduit and a bonus.

Delayed Rays of a Star by Amanda Lee Koe is published by Bloomsbury in hardback at £16.99 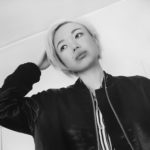 Amanda Lee Koe's working manuscript for Delayed Rays of a Star won the 2017 Henfield Prize, awarded to the best work of fiction by a graduating MFA graduate at Columbia University. She was the fiction editor of Esquire Singapore, an honorary fellow of the International Writing Program at the University of Iowa, and the youngest winner of the Singapore Literature Prize for the story collection, Ministry of Moral Panic. Born in Singapore, she lives in New York.
@amandaleekoe
Tags :
Q&A Anna May Wong Hollywood Leni Riefenstahl Marlene Dietrich Nazi