read on
Photo by 冬城 on Unsplash

By Aaron Reynolds
Q&A | 4 minute read
Author Aaron Reynolds on loving Stephen King, reading in a blizzard, and working at his kids' arts and crafts bench

I have a beautiful, tiny desk that’s an old pedal-driven Singer sewing machine, the kind that folds into itself. It’s important for the desk to be small, because otherwise I pile stuff all over it. And I pile stuff all over this tiny desk, too, but it’s small so the piles are small and easy to clean up. Mostly, though, I end up on my back porch on an ancient wooden bench, working at what used to be my kids’ arts and crafts table until they decided the dining room table was better for that. The little paint splatters and bits of dried glue remind me that this is creative time.

I just finished Wanderers by Chuck Wendig, which was the perfect summer read for me. Smartassed, tense, ending that packs a punch.

I’m about a third of the way through Space Odyssey by Michael Benson, a very human-centred telling of how 2001 was made. I’m savouring it, reading one small chapter at a time, because it’s so surprisingly wonderful.

I saw the new production of The Front Page at Stratford this year and it was a messy, funny, perfect play for our times: at its core, it is about how journalists can be awful human beings and still be essential to the course of justice.

I found myself unexpectedly moved by Stan Sakai’s Senso — Sakai has been writing and illustrating the comic book Usagi Yojimbo for over thirty years now, and while the comic is linear, characters age and time passes, only five or maybe ten years have gone by in his story. Senso, released around Usagi’s thirtieth anniversary, makes a brave jump forward thirty years and gives the story an ending that is perfect. Characters take their final bows, long-simmering storylines are resolved, villains face their comeuppance. I loved it.

In my early teens I went way down the Stephen King rabbit hole thanks to a copy of Firestarter that my cousin Sarah lent me to read when we were staying with them for the summer. Our summers were a circuit through the homes of all of our Ontario cousins, and I hit up every used book store and flea market and read Carrie, Christine, Salem’s Lot, The Shining, The Talisman and The Stand. And then It came out.

I was far enough down the library’s waiting list that I finally got the book in the dead of winter. I was reading it at home, alone, and I got so terrified that I couldn’t stay in the house by myself. It was a blizzard outside, so I put on my boots and parka and gloves and hat and went out on the porch… with the book, and continued to read. It is not easy to read in a blizzard, and it is not easy to turn pages with mittens on.

I opened it, read a page, and had to sit down on the ground because I was laughing so hard. At some point it dawned on me that I wanted to do that to someone else…

Across from the photo lab where I worked from age fourteen to twenty-two there was a WHSmith that consumed around 50 per cent of my earnings — the other 50 per cent went to the record store a few doors down — and there was a shelf in the Humour aisle that didn’t have a label on it and was filled with weird stuff, like The Meaning of Liff, a fake dictionary by John Lloyd and Douglas Adams. I was a voracious consumer of this shelf. One time I saw a beautifully illustrated book called The Stinky Cheese Man and Other Fairly Stupid Tales by Jon Scieszka and Lane Smith. I opened it, read a page, and had to sit down on the ground because I was laughing so hard. At some point it dawned on me that I wanted to do that to someone else, give them that unexpected moment of pure joy. Fingers crossed.

Depends. Scratching out notes or fiddling with ideas, a pen and a little notebook. Fleshing things out, usually my iPad. I avoid the computer unless I’m doing layout stuff; it makes it feel too much like work — which is probably a side effect of working with computers as a day job for so long.

I come back to all of Raymond Chandler every five years or so, but he’s the exception.

I had the wonderful opportunity to visit my childhood library this summer. My wife and I were both working on things that kept us away from home, so my kids spent a week with my parents and were enrolled in a summer program at the same library where I borrowed It and a thousand other books. Arriving to pick them up was like stepping through a time portal into my own childhood.

The only Dickens I have ever finished was Oliver Twist.

Effin’ Birds pretends to be a birdwatcher’s guide, but it really lists the habitats and identifying characteristics of people who have wronged me in some way.

Effin’ Birds by Aaron Reynolds is published by Unbound. 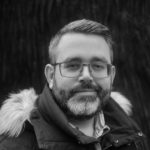 Aaron Reynolds is a humourist, professional speaker and the man behind the @EffinBirds and @swear_trek Twitter accounts. When he's not on Twitter, you can find him producing a series of podcasts and at ComicCons dressed as George Lucas. He has been a baseball writer, a fine art printer and a mall Santa Claus photographer. Aaron was raised in Mississauga, Canada, a suburb where they cut down all the trees and named the streets after them. He currently splits his time between Toronto and Ottawa.
@aaronreynolds
Tags :
Q&A art and craft creativity Stephen King writing