Jane Austen, Joanna Lumley and My Mother, The Bearded Lady

I write in my late husband’s study which is overflowing with books, musical instruments, scripts and letters, in piles on the floor or spilling off the shelves. I used to write in a smaller version at the top of the house, but when Miles died, I moved in here to set about getting the book he had been writing, How Shall I Tell The Dog, finished.

Having published two further collections of his writing, I set about meeting the promise I had made him, that I would see his letters published. He had written over 20,000, at a conservative guess, and that book has just been published by Unbound as My Mother, The Bearded Lady: The Selected Letters of Miles Kington. So it is in this study that I wrote two of the Summerstoke books (A Summerstoke Affair and Spring Mischief) and A Long Shadow, which was published this summer.

I tend to have more than one book on the go, usually a mixture of fiction and non-fiction. My number one choice for the last two years has been All The Light We Cannot See by Antony Doerr, which haunts me still. Another strong contender is Warlight by Michael Ondaatje, which I have just finished and couldn’t put down. Both have the Second World War as their backdrop, but that is a coincidence – it is the power and sensitivity of the writing and the innovative way both authors use the craft of story-telling that held me in thrall. And my non-fiction contribution is Isabel Hardman’s Why We Get The Wrong Politicians, which I am urging my friends to read.

Living in the country it is not always easy to get to see really good theatre so I really appreciate NT Live. The Lehman Trilogy was stunning. A mini epic, beautifully designed and fantastically performed, it spanned over 160 years with just three actors playing all the parts.

When I was about twelve, my mother introduced me to Pride and Prejudice and I discovered Tales From Shakespeare by Charles and Mary Lamb, thus starting a lifelong passion for Austen and Shakespeare.

A hard question to answer. No one book, but it was the writer, Mary Wesley, who gave me the courage to turn my back on scraping a living in documentary television and fringe theatre and write my first novel. She wrote her first adult novel when she was 71 and then wrote another nine. Best known for A Camomile Lawn, her books weave backwards and forwards in time, acerbic and unsentimental in tone, and very contemporary. And it was Miles, particularly, who persuaded me I could write more than scripts and encouraged and supported me.

Pen and paper or laptop

Miles always typed and kept copies of everything he wrote, whether it was for publication or simply notes to the milkman. Like him, I write on the desk-top. I’ll make hand-written notes, but not often, and I never work on my laptop. Sitting at the desk has a feeling of permanency about what I am doing.

Looking at the pile of books on my bedroom floor, waiting to be read, I would say that ‘life is too short’ but like the company of old friends, there are books I re-read and enjoy.  Persuasion is my favourite Jane Austen, Dorothy L Sayers is an old favourite, Sherlock Holmes is a great standby for sleepless nights, and I am currently really enjoying re-visiting Miles’ s fake autobiography Someone Like Me.

The ‘best’ are never that one-dimensional. Villains are the ones that have you routing for them until you discover their perfidy and heroes are the reverse.  However, I have to admit that in my Summerstoke books I have two perfectly nasty villains, in the shape of a pair of posh wealthy farmers, and an octagenarian granny who is wise and wonderful.

Ages ago, to my shame. I spend a lot of time in a local bookshop and always come away with books I ‘absolutely must read’. But since I have quite a collection of those already, if I’d got them from the library I would have paid for them thrice over in fines…

Moby Dick, The Heart of Darkness, A la recherche les temps du perdu and quite a few others.

Finally, what’s the elevator pitch for your latest books?

It has been an interesting and intense summer seeing two completely different books finally coming to fruition. A Long Shadow, which opens with the death of a young farmer, is set against the backdrop of the countryside reeling with the consequences of foot and mouth disease and BSE and covers a period from the Second World War to 2002. It is a complex story, weaving in different threads which finally come together to provide the reader with the solution to the central question – who, or why did the young farmer die.

My Mother, The Bearded Lady couldn’t have been more different. Miles was a humorous writer, very much admired by a wide contingent of fans and fellow writers. So his letters were almost always interesting, almost always funny, often completely fanciful. Among the recipients were Philip Larkin, Andre Previn, Alan Coren, Joanna Lumley, Michael Pain, Terry Jones, John Cleese, to name but a few. Too many for one book and Scott Pack from Unbound spent the better part of two years patiently insisting I reduce the number. The result is a beautifully produced gem of a book. A book to dip into, a book to give as a present, a book to treasure and to return to again and again.

My Mother, the Bearded Lady: The Selected Letters of Miles Kington is published by Unbound. 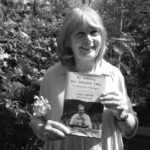 Caroline Kington lives in an old house in a small village in the West Country with her dog, a mad spaniel. Her late husband was the humourist, writer and broadcaster Miles Kington. She was a TV documentary director most of her professional life and worked in fringe theatre, until she was persuaded by Miles to channel her energies into writing novels. After he died, she published three further books of his plus three of her own and edits an ever-expanding website promoting his work, to which a fresh selection of material is added every month.
Tags :
Q&A Austen BSE foot and mouth Shakespeare

I told her I loved her book. And she smiled and said thank you then asked what I thought of the ending…