The entomology of a story

By Yikai Zhang
Q&A | 4 minute read
'I think there is a Dr Mann in every one of us, whether we would like to admit it or not' - Yikai Zhang on villains, heroes and a very special beetle

In bed surrounded by cushions. That’s where the best ideas happen.

I must admit that I watch way more movies than I read books, but when I do read it tends to be travel memoirs or factual books about natural history. The best one I’ve read recently is The Malay Archipelago by Alfred Russel Wallace, who was Darwin’s contemporary and independently ‘discovered’ the theory of evolution.

The best film I’ve ever seen is The Prestige, a dark tale about the rivalry between two Victorian magicians, although I could say the same with all the other Christopher Nolan films. Batman Begins and Interstellar are definitely also up there as some of the best movies of all time. They are truly phenomenal works of art and have provided endless inspiration for my writing.

When I was a child, I read the Jules Verne classics Voyages extraordinaires religiously. My favourite one was The Mysterious Island, a tale of survival on a harsh desert island that embodied the romantic ideas of discovery in the Victorian era. I also loved Twenty Thousand Leagues Under the Sea and Around the World in Eighty Days, but I did not know that they were science fiction at the time. Jules Verne seemed to be able to predict future technologies way ahead of his time!

The Sherlock Holmes stories for sure. They have permeated all aspects of my work and creativity. If I had to pick one it would be The Hound of the Baskervilles, but The Sign of Four and The Valley of Fear are also incredibly inspirational in terms of imagery. I remember I used to imitate them and write my own detective stories at school, but they were so bad and cringeworthy that I’m glad they’re nowhere to be found. . .

Definitely laptop. I prefer pen and paper for brainstorming but when it comes down to polished writing, it really helps to be able to move sections of sentences around and see how everything fits together.

In general, my taste for books is quite narrow. As a result, I have a small library of books that I actually open, and generally I don’t read books multiple times unless they’re by an author I love, like Jules Verne or Arthur Conan Doyle.

There is a reason why so many people believe Sherlock Holmes was a historical figure, because he just feels so ‘real’

The best fictional hero has to be Sherlock Holmes. He is the ultimate combination of a vigilante, a magician and a mad scientist, somebody who is utterly absorbed in the perfection of his craft and detached from the distractions of the world around him. There is a reason why so many people believe he was a historical figure, because he just feels so ‘real’.

The best villain I have seen portrayed in film is Dr Mann from Interstellar. He started out as the bravest of the brave, but in the end succumbed to his own cowardice and sabotaged the lives of others in order to save himself. I think there is a Dr Mann in every one of us, whether we would like to admit it or not, and that’s what makes him so terrifying.

About five years ago when preparing for my A Levels. I am a quiet person but I find libraries a bit suffocating!

The Lord of the Rings. I love the Jackson movie adaptations but I must admit I skimmed over most of the books. . . they were simply too long!

Jungle Gems is a semi-fictionalised account of an adventure in the mountains of Hainan, where I searched of a new species of beetle which only lives on the highest peaks. During my treks I become ever more dispirited by my setbacks and aware of a mysterious presence. In spite of all this I pushed ever further towards the summit, where I made a shocking discovery about my mission. It is essentially a story about the pursuit of success based on my personal experiences, but disguised in the form of a nature book.

Jungle Gems by Yikai Zhang is published by Unbound 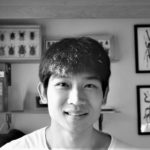 Yikai Zhang is an artist and naturalist specialising in entomology. He is currently studying taxonomy at the Natural History Museum, where he has been a curator for many years. In his spare time he enjoys hiking, painting and doing handstands.
Tags :
Q&A beetle holmes interstellar