read on
Photo by Tyler Nix on Unsplash

By Lucien Young
Q&A | 5 minute read
Lucien Young on Shakespearian insults, blagging his way through Ulysses and writing Robocop in iambic pentameter while sitting in a coffee shop pecking away at a laptop

In a succession of North London coffee shops. To receive my patronage, a coffee shop must have a) strong WiFi, b) scrupulously maintained toilets and c) a lenient attitude to me nursing the same Americano for three straight hours. The good thing about writing in a North London coffee shop is that every other customer is writing something, too. It’s oddly comforting to see fellow hapless creatives hunched over a MacBook Air, pecking away at their novel, play or sitcom spec. The downside is that I get over-caffeinated and become convinced that every word I’ve written is stupid and wrong.

On the book side, Sixty Stories by Donald Barthelme is hilarious and mind-expanding. I would give a great deal to be so profoundly funny, and in such a strange way. I’d recommend Me and Miss Mandible and Rebecca as entry points to the bizarre brain of Barthelme.

The last film that really got under my skin was Robert Eggers’ The VVitch, which is almost unbearably atmospheric and features a commanding performance by Finchy from The Office. I think about it frequently. Also, John Wick 3 was dope.

I haven’t been to the theatre in shamefully long, but two productions I enjoyed in recent years were Annie Baker’s The Flick and Anne Washburn’s Mr Burns, a Post-Electric Play.

I’ve no doubt my fascination with stories and writing comes from my dad reading to me every night when I was little. The Jennings and Derbyshire series, by Anthony Buckeridge, was a big favourite of ours. I loved hearing about Jennings’ escapades, and his clashes with Old Wilkie. As a comprehensive kid in the 90s north-east, I found the world of a 1950s boarding school fantastical and fascinating. These books definitely served as inspiration for my upcoming book, The Secret Diary of Boris Johnson, Aged 13¼, which chronicles our dear leader’s time at Eton.

Tough one. I think it was more an accumulation than any one book, but Stephen Fry’s Moab Is My Washpot was particularly formative. Reading about the awkward teen years of someone I admired made me think that my own adolescence could lead to good things. On top of that, it’s funny, dramatic and extremely moving.

Also, a colleague of my mum once lent me a book of Frasier scripts, which I read so many times that the thing became unreturnable. I’m sure my obsession with it contributed to an understanding of jokes and story structure, which helps in my day job of TV writer.

Peacock-feather quill, while reclined upon a chaise longue in my holiday home on Lake Geneva. No, but for real: I like to jot rough ideas in a notepad, then it’s laptop all the way. That said, it depends on what’s to hand when I get an idea, or have some free time. A lot of the pieces in #Sonnets were composed in the Notes app on my iPhone while commuting, loitering, etc. Most of my writing is for TV, so I need a laptop for that (shoutout to Final Draft, the useful, if ridiculously expensive, screenwriting software).

I mean, I spend a substantial chunk of each day joylessly scrolling through Twitter, so it would be pretty rich if I said I didn’t have time to re-read things. More to the point, re-reading, re-listening and re-watching are some of life’s foremost pleasures. If a work has real merit, you’ll discover new facets whenever you come back to it. Plus, knowing where a book/piece of music/film is going allows you to appreciate its artistry and structure all the more. Having said that, people are free to read #Sonnets just once — or zero times — as long as they stump up that sweet cashola.

As an avatar of the shiftless upper class, Bertie Wooster should be odious, but such is Wodehouse’s skill that I find myself rooting for him at every turn

Well, I’ve already mentioned John Wick, so I’ll mix things up and say Bertram Wilberforce Wooster. I’ve seen a lot of Twitter people liken our current PM to Bertie, but this strikes me as unfair. Yes, Jeeves’ boss may share BoJo’s privileged background and buffoonish tendencies, but he is also fundamentally good-hearted, with a desire and capacity to improve himself. As an avatar of the shiftless upper class, he should be odious, but such is Wodehouse’s skill that I find myself rooting for him at every turn.

Villain-wise, I’m a big fan of Aaron the Moor, from Shakespeare’s Titus Andronicus. He’s the lover of Tamora, Queen of the Goths, and upsets her two sons by getting her pregnant. One of them confronts him by saying, ‘Thou hast undone our mother,’ to which he replies, ‘Villain, I have done thy mother,’ a clapback that echoes through the ages.

I moved last year and still have yet to join. Thanks for reminding me!

None. I have read every important book, and understood them on an impressively deep level. I certainly didn’t bullshit my way through an English degree without doing most of the reading. No, you’d never catch me speaking authoritatively about Ulysses, despite having only browsed the first chapter in a pub the night before…

#Sonnets is a collection of Shakespearean verse on ludicrous modern themes. If you’ve ever yearned to read about RoboCop in iambic pentameter, then run — don’t walk — to get it. I can 100 per cent guarantee that this is the funniest book that features Elizabethan English and references to Kim Kardashian, Tinder and Pikachu.

Ah, third floor — that’s me. Seriously, though, do buy the book. I put a lot of love and effort into the thing, and people seem to be enjoying it.

[I step out of the elevator. The doors close behind me, much to your relief.]

#Sonnets by Lucien Young is published by Unbound. 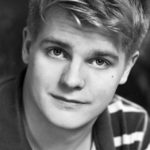 Lucien Young is a comedy writer who has worked on various TV programmes, including BBC Three's Siblings and Murder in Successville. He was born in Newcastle in 1988 and read English at the University of Cambridge, where he was a member of the world-famous Footlights Club. His previous books are Alice in Brexitland, Trump's Christmas Carol, The Secret Diary of Jeremy Corbyn and The Secret Diary of Boris Johnson, Aged 13¼.
@LucienDYoung
Tags :
Q&A coffee iambic pentameter Shakespeare writing