read on
Photo by Vincent van Zalinge on Unsplash

If you sliced me open you’d find a hare inside

By Tom Cox
Q&A | 4 minute read
Itinerant author Tom Cox on on the books - and animals, and fields - that made him

I’m quite itinerant in my writing habits, as in my subjects. I wrote a lot of Ring The Hill in fields, on riverbanks and in bed. I am told the latter is terrible for my back, so I’m trying to be better in my new house, but I suspect most of my next book will be written at my kitchen table, rather than the writing desk I have set up specifically, as I like breaking rules.

Toni Morrison’s Sula. I also rewatched Dazed and Confused for the sixty-somethingth time and it’s even greater than ever. The ‘I wanna dance!’ line is the one I relate to most strongly in any film. Hearing it again has reminded me that I need to get back on track with my true ambition, which is to give up writing to travel the country dancing at Seventies funk nights. If anyone wants to pay me for this, please get in touch.

Fantastic Mr Fox by Roald Dahl. I nagged my mum and dad to read it to me again and again at bedtime, and the drawings haunted me. A little later Masquerade by Kit Williams had a profound effect on me and I think if you sliced me open you’d probably find one of the hares inside me somewhere. Not that I ever ate a hare, even before I was a vegetarian.

I need to get back on track with my true ambition, which is to give up writing to travel the country dancing at Seventies funk nights

Possibly one of the above. But additionally, The Catcher in the Rye excited me a lot when I started reading in my late teens, and possibly rescued me from a life of sport (I would never dare reread it though, just in case I no longer liked it). A year or two later I discovered Joan Didion, and realised she was better than all the other supposedly cooler non-fiction essay writers from the same era that I’d been told to read, and the way she wrote probably had more of an impact on me than I realised at the time.

Laptop, but I’ve been writing more and more in longhand over the last five years, I’ve got re-accustomed to it, and my longhand scrawls often seem to contain what becomes the best bits of my books. I can also now once again write in longhand without ‘Agh fuck my arm hurts so much!’ after seven words.

I do, but they have to be very special, as there are always too many great books out there still to be read. Ragtime by E. L. Doctorow and Nobody’s Fool and Straight Man by Richard Russo are probably the books I’ve spent most time with as an adult (three reads each).

I tend not to think in terms of ‘hero’ and ‘villain’ when I think about books I’ve read – maybe because I read a lot of books where the characters are very well-drawn and complex mixtures of good and bad. So I will choose Sully from Russo’s Nobody’s Fool, who is both a hero and a villain.

I went to Glastonbury library shortly before I moved, and the Library of Avalon, down the road. I also visited my mum and dad’s lovely local library in Newark to do a talk last year. I’m looking forward to re-familiarising myself with Norwich’s excellent greenhouse of a library in The Forum now I’m back here.

I once had to read War and Peace in 24 hours for a newspaper feature. I did actually finish it, but I was delirious by the end, and can remember nothing about it, apart from the phrase ‘a dish of sausages’. So in a way maybe I didn’t really read that. Most people who know me know I have always been pretty honest about being ill-educated and having read pitifully few classics. The classics I tend to enjoy most were written between 1930 and 1980.

The whole point of my books these days is more or less that they would all make terrible pitches, and that’s kind of the whole point of them. At a push, Ring the Hill would be ‘a book not so much about hills as around them’ and Notebook would be ‘a stationery lover’s chaos of nothing’.

Ring the Hill by Tom Cox is published by Unbound 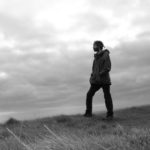 Tom Cox lives in Devon. He is the author of, among others, the Sunday Times bestselling 'The Good, The Bad and The Furry' and the William Hill Sports Book longlisted 'Bring Me the Head of Sergio Garcia.'
@cox_tom
Tags :
Q&A Forum hare Norwich notebook