The triumph of hope

I have been a cafe user since leaving my job at the BBC in 2002. I like to be among the racket of human activity. A pair of noise-cancelling headphones keeps out the specifics of conversation, as the minutiae of other people’s lives can be more interesting than what I am trying to write. When I lived in Bristol I moved between branches of the The Boston Tea Party, because there was no background music. Now based in Cardiff I visit a number of different cafes, one of which is outdoors in a park. I also make regular incursions to the city library and spend the day among students revising for exams.

I have just finished The Tattooist of Auschwitz by Heather Morris. I stayed away from the book for a while because I couldn’t imagine how this barbarity could be portrayed in popular fiction. But I didn’t know it was based on the testimony of protagonist Lale Sokolov who had spoken his story to the writer, needing it to be told. Once I started reading I couldn’t stop. I read in every spare moment and finished the book in two days. In troubled times it is good to be reminded of man’s capacity for inhumanity and the triumph of hope.

I remember how this epic story of migration lit up my imagination. The dustbowl seemed so far from my home in South East Kent and the distances so vast

I read The Grapes of Wrath by John Steinbeck when I was 17. I remember how this epic story of migration lit up my imagination. The dustbowl seemed so far from my home in South East Kent and the distances so vast. Then there was the cruelty bestowed upon the Joad family as they moved across the continent and the small acts of kindness that helped them persist.  It helped me understand how complicated and contradictory human beings can be and how powerful is the will to survive. It is a book I think about every time I hear a story about migrants in a rubber dingy crossing the English Channel.

I have been teaching life writing for the last 10 years and always begin my workshops with the same passage, the opening of As I Walked Out One Midsummer Morning by Laurie Lee. More than any other, it is the book that made me want to write memoir after years of being a scriptwriter for radio and television. I love the way Lee elevates ordinary situations with lyrical prose, full of texture and sensory detail. The opening pages are like a film as he shows us his younger self walking away from his childhood home before weaving in the context that makes sense of the story to come.

It used to be the case I’d always write on paper then go to the keyboard later.  As laptops got lighter and the batteries lasted longer, I began writing straight to computer. I still carry notebooks around and like being able to make a mess. I am very fussy about the books I use and won’t go near a notebook that isn’t A4, soft covered, with thick, plain cartridge paper, and little black journals made by Seawhite of Brighton.

There is not enough time to re-read most books, though I can’t give them away and will occasionally find one of a shelf to seek out a passage that has surfaced in my thoughts. I like looking at them all on the shelves and how they have become a journal of the passing years: even if I can’t remember the plot I recall where I read most books and how the narrative often fused with the real world. Every few years I come back to The Grapes of Wrath, and The Mayor of Casterbridge by Thomas Hardy, two books I read while studying A-levels in the 1980’s. I like the way the characters stay the same age as I get older.

Just last week I went to write in Cardiff Central Library. It is a big, light building with incredible views across the city from the upper floors. I am surrounded by thousands of books and thinking of the time and trouble it takes to write just one, I imagine all the authors beavering away at desks and coffee shops around the world and the years it has taken to put those words in print.

When I was a radio producer at the BBC, I frequently found myself working with learned presenters who would fire off references from a library of classics. I would stroke my shin, nod in agreement then go away and read the book. Or sometimes I’d glean enough information to actually contribute to other conversations as they came up without reading. By the time I opened Crime and Punishment I’d been talking about it for years.

“My name is Paul Dodgson.  When I was a teenager all I wanted to do was to go out on the road with a guitar and a headful of songs. But that was too scary so I got a proper job instead. Thirty years later, I headed out through the door and did it for real.”

On the Road Not Taken is a love story about the transformational power of music, about the past and the present and finally living the dream. 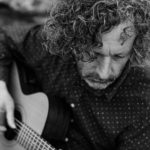 Paul Dodgson is a writer, musician, teacher and radio producer who has written nineteen plays and stories for BBC Radio 4, drama documentaries for BBC2 and Eastenders for BBC1. He has written plays for young people and music and lyrics for five musicals including The Nutcracker at Theatre Royal Bath and Nuffield Southampton. Paul has made 400 programmes for all BBC radio networks, taught creative writing around the world and was writer-in-residence at Exeter University. After thirty years of regret and stage fright, Paul became a singer-songwriter in 2016 and went out on the road not taken.
Tags :
Q&A