By Peter Aspden
Essay | 7 minute read
Patrick Leigh Fermor had a life-long love affair with Greece; Zorba the Greek delighted a generation... What is it about the country and its people that continues to intrigue the Brits?

Early last year, taking advantage of an Easter break, I travelled to the western Cretan coastal village of Stavrós for an early season swim. Its beach, truth to tell, was not yet geared up for the annual influx of sun-seekers. The water was a little too cold. A sprightly middle-aged man, hopeful and gently assertive, demanded a crazy price for hire of a deckchair, which I declined. Some cafes were closed altogether. But there was a new, conspicuous feature in the centre of the resort I had not seen before. Dominating the beach’s entrance was a giant, black-and-white poster of two men, arm-in-arm, dancing the languid steps of what will forever be known as the ‘Zorba dance’.

To those of a certain generation, the two figures would have been instantly recognisable: Alan Bates and Anthony Quinn, stars of Michael Cacoyannis’s Oscar-winning 1964 movie Zorba the Greek. For those who know the film, the circular beach, at the foot of a barely vegetated hill, also prompts a moment of recall. This is the location at the end of the film where Zorba (Quinn), the rough-hewn, seize-the-day sybarite, finally shows the timid, linen-suited Englishman Basil (Bates) how to make some easy money.  He has devised a revolutionary timber-transporting contraption, which will take logs down a zip-line to the sea in record time. Basil has invested in the scheme, and looks on with mounting trepidation.

The grand opening is a disaster. The logs come down too quickly. Finally the whole contraption falls to pieces. Basil is mortified; Zorba takes a second or two, and bursts out laughing. He teaches the Englishman how to dance. Right there, on the beach. The dance will nullify the pain. The dance reminds us that money-making schemes don’t really matter. The dance is a force which demands nothing less than instant existential realignment. 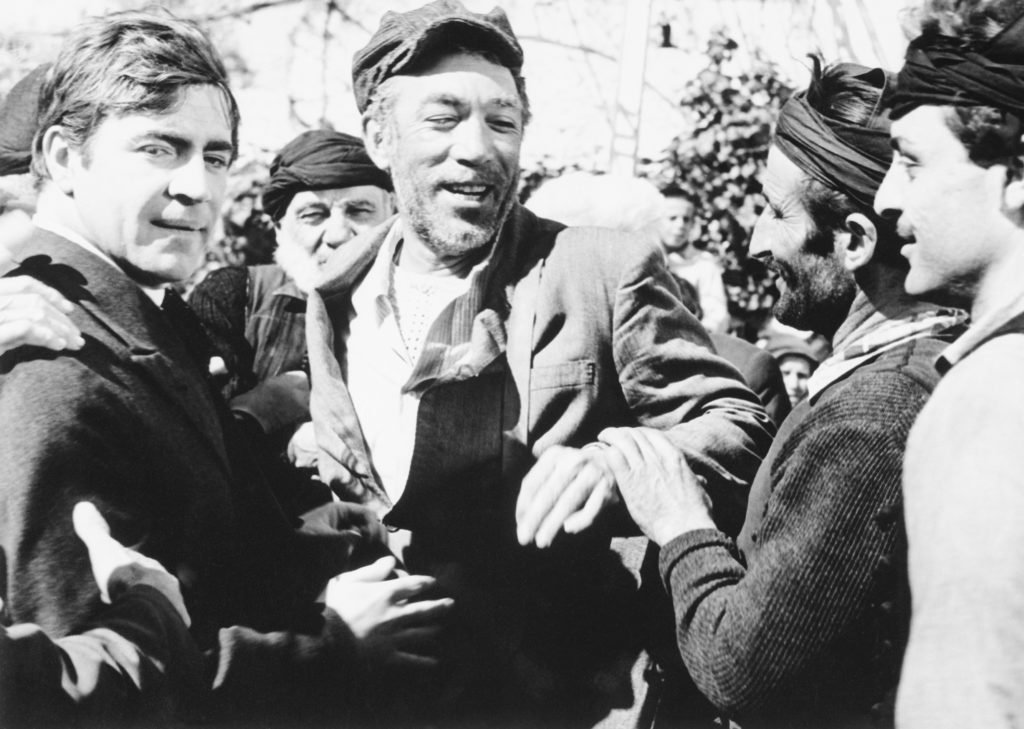 Alan Bates as Basil and Anthony Quinn as Zorba, in the film Zorba the Greek (Getty)

Like Basil, I too am half-English, half-Greek. The very year that the Cretan writer Nikos Kazantzakis wrote Zorba the Greek, 1946, was the year my father was stationed as a soldier in my mother’s house, while civil war began to rip Greece apart. They fell in love, and they married. My father, in his civvies, was also a timid, linen-suited man. He too began to learn that the explosive and spontaneous way of the Greeks could make little things not matter at all.

I often asked him what his first impressions of Greeks were, and he always gave the same answer. He noticed that when food arrived on the table, everyone attacked it. He was left with nothing. He compared these attacks to German Stuka dive-bombers, and everyone around the table laughed, because they were all versed in the newly forged metaphors of war. To his dying day, when salads appeared at family dinners, everyone would warn: ‘Watch out for the Stukas’.

I was minded of these matters at the lovely little British Museum show, ‘Charmed Lives in Greece’, which charts the relationship between three men, two of them English and one Greek, over the post-war years. Patrick Leigh Fermor was a writer and traveller whose daring war-time exploits in Crete led him to a life-long love affair with Greece, which he chronicled with great elegance and insight. John Craxton was a painter, born into bohemian ways, whose nomadic urges were at least partly satisfied by his lengthy sojourns in the Greek islands. Completing the triangle was Nikos Hadjikyriakos-Ghika, a Greek artist, ironically the most introverted of the three, as famous for his ‘Homeric literary-gastronomic evenings and memorable drinking sessions’ in Hydra, with the likes of Henry Miller, Walter Gropius and Henri Cartier-Bresson, as for his fine geometric landscapes.

This was the charm of the Mediterranean, hot-blooded, authentic, violently life-affirming

The show, relying on correspondence, anecdote and some gorgeous paintings, is full of light and warmth. These were charmed lives indeed. But this was, to the two Englishmen at least, a different kind of charm than the one they were accustomed to. It was not the ‘creamy’ English charm so memorably described by Anthony Blanche in Evelyn Waugh’s Brideshead Revisited, as he admonishes Charles Ryder for his succumbing so limply to the polished charisma of the Brideshead family: ‘[It] is the great English blight. It does not exist outside these damp islands. It spots and kills anything it touches. It kills love; it kills art; I greatly fear, my dear Charles, it has killed you.’

No, this was the charm of the Mediterranean, hot-blooded, authentic, violently life-affirming. ‘Like men ought to be,’ wrote Miller of the Greeks, ‘frank, natural, spontaneous, warm-hearted . . . I love [them] for having revealed to me the true proportions of the human being.’ This kind of charm was a balm to the deprived English soul. Here was a setting of a cultural template – restrained northerners surrendering to the sensuality of the south – that would one day lead to mass tourism, and the improbable worldwide fame of Zorba’s dance. Those accelerating bouzoukis of Mikis Theodorakis’s soundtrack, parodied to death, would go on to become an instant signifier for loss of inhibition, wildness, Dionysian abandon.

But back then, at least, there was a more rarefied air to this cultural exchange. Of course the charmed lives were also privileged lives. Ghika’s evenings of cultural and gastronomic excess were enhanced by the splendour and location of his eighteenth-century house in Hydra, looking over a landscape that might have been created purely for the purposes of study by aspiring painters. An air of bohemian camaraderie permeates his writings. ‘Yesterday I was with Craxton,’ he writes in 1954, ‘and he introduced me to Picasso’s Dora Maar, she was with Giacometti.’ Of course she was. 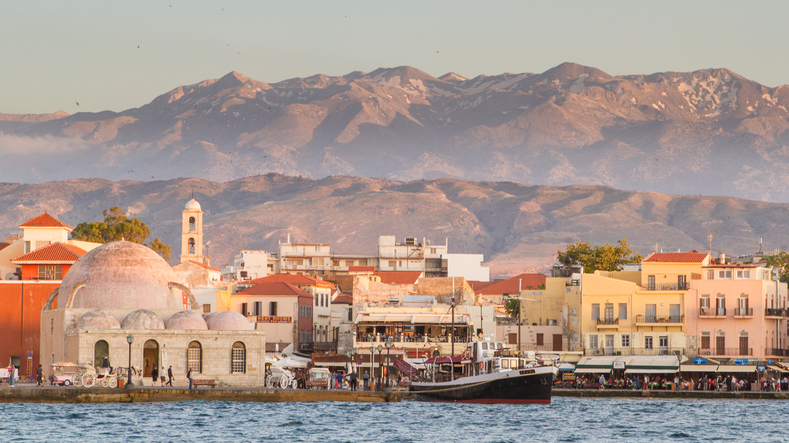 View of Chania harbor with white mountains in background (Getty)

Craxton, for his part, settled in Chania, the once-Venetian port of western Crete. On the day he moved in to his harbour-side home, in 1960, he was invited to dinner on Aristotle Onassis’s nearby yacht, to join, among others, Margot Fonteyn and Winston Churchill. An auspicious start to his residency, but trouble soon struck, when Craxton was forced to leave Greece by the military junta which seized power in 1967. It considered his love of sailors’ bars to be evidence of snooping for naval intelligence, which was wide of the mark by an aircraft carrier or two.

By then, circumstances had changed. Ghika’s lovely home in Hydra was destroyed by fire in 1961. Neither he nor Leigh Fermor ever returned to the island. In the meantime, the charm of Greece was being discovered by ever-greater numbers of visitors, lured by the success of Zorba the Greek and Jules Dassin’s Never on Sunday. Craxton hated both the book and film of Zorba, for their negative depictions of Cretan peasants, and blamed himself for his own, in truth rather small, role in the tourist boom.

Has Greece been able to retain its charm in the face of the tourist hordes? Best ask those who continue to visit, demanding something a little bit extra, aside from the sun and sea, from its bright skies and rugged terrain. Popular culture would suggest that the magic is intact. Here is Willy Russell’s Shirley Valentine, Liverpudlian housewife, fleeing the banality of her domestic chores to find her true identity on a Greek beach: ‘I’ve allowed myself to lead this little life,’ she finally tells her husband, ‘when inside me there is so much more.’

Here, too, Richard Linklater, director of Before Midnight, the third in a trilogy of films, starring Ethan Hawke and Julie Delpy, tracing the two-decade course of a romantic relationship. Greece, said Linklater, was the ‘perfect backdrop to depict what human relationships are all about’, giving the film a grittier, more authentic feel than its more sentimental predecessors. The expansive, opening scenes, rambling conversations animating a long, sprawling lunch, were filmed in the yard of Leigh Fermor’s house in Kardamyli, on the Peloponnese. The spirit of those charmed lives continues to cast a spell.

Back in London, I visited an exhibition of John Craxton’s work at Osborne Samuel gallery, timed to coincide with the BM show, and was much taken by a small crayon drawing of a bouzouki player, hunched over his instrument in rapt concentration. It was, at £9,500, unaffordable to me. Not to worry. Zorba’s throaty laugh resounded in my head. The dance is the thing, he said to me. The dance is the thing. 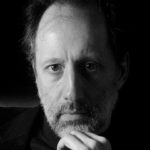 Peter Aspden is the former arts editor of the Financial Times, and continues to write about cultural affairs for the paper. He has lectured widely on the arts, and has been a judge for many leading arts prizes including the South Bank Arts awards, the Prix Pictet for Photography and the Sovereign Asia Art prize. He bought his first Beatles wig when he was five years old.
@peteraspden
Tags :
Essay Crete Greece John Craxton Nikos Hadjikyriakos-Ghika Patrick Leigh Fermor