read on
Photo by Nicola Fioravanti on Unsplash

The cerebral chemistry of human relationships

By Elle Nash
Q&A
Elle Nash's first novel follows the story of an unnamed young woman who embarks on a fraught relationship with a couple, Matt and Francis. She talks loneliness and belonging in this exclusive Q&A

One of the book’s most striking elements is that its central female character, the subject and main voice of the novel, remains nameless throughout. We only know her by the name given to her by others: Lilith. What was your inspiration for the novel and why did you choose to put an unnamed young woman at its centre?

Since art began, women’s bodies have served as a projection for the societies in which they are placed. Not only are their bodies assumed to communicate the zeitgeist of the moment, they also become a place in which society places their fears, anxieties, expectations. I wanted to explore this idea by creating a character who would become a literal projection for others in her life, and how that act, of her becoming named, assuming this identity that someone wanted her to have, changed how she moved through the world.

On one level, Animals Eat Each Other reads as a coming-of-age novel, exploring with acute emotional honesty the experience of a high-school leaver. What drew you to write about this stage of life so closely in your first novel?

In the US there’s a lot of pressure on young people to determine major moments of their lives by deciding ‘what they are going to do with the rest of their life’. But I think for a lot of people, especially without parental guidance, they aren’t prepared to make those decisions— and what no one tells them is they really don’t have to decide all of that right then, in that moment. At the same time we expect them to be fully functioning adults, be prepared to pay for bills, handle health insurance, take care of themselves, but this time can be so riddled with existential anxiety, trying to figure out who you are and what the world means. I wanted to explore an aspect of growing up that I hadn’t seen explored before: what happens when you keep making bad decisions and refuse to move forward?

Everyone has the capacity to be a monster in some respect, especially as teenagers

This is a book that doesn’t shy away from flawed characters. Even the female protagonist manipulates and lies to those around her. Is this a side of human behaviour you wanted to explore from the outset?

Yes. I think everyone has the capacity to be a monster in some respect, especially as teenagers and young people when we’re still feeling things out. We all have moments where we might have lacked empathy, or pushed forward into a bad decision despite knowing the consequences. We might have questioned ourselves and our motives, or simply didn’t have the self-respect to do better. When you’re young, you have more room to make these kinds of mistakes and learn from them.

It was important to me that the main character be bisexual, but also for that not to be a core feature of her identity. She’s not learning about her sexuality as a token in a story; she doesn’t struggle with her attractions. I was interested in the eroticism of obsession, manipulation and deceit. The struggle is in the power play of the situation — in her finding herself masked by the desires of others. I do think it is important, however, to show there are many ways of organising relationships with people that are outside of heterosexual norms, and that these ways can both be good and bad, just like any relationship.

There’s a mystery around how chemistry works between two (or a few) people and what makes one person attracted to another. It’s all very occult to me

There is an interesting line explored in the female narrator’s sexual experiences. On the one hand, she is empowered to explore her desires. On the other, there is an uncomfortable dynamic to some of the encounters which are driven more by her need for acceptance and validation. This is a nuance deftly explored in the book. How important was this for you to explore as part of the novel?

It was very important. I love to explore the little intricacies and interplay between people that lead to these highly charged situations. There’s so much to be gleaned from the things that are unspoken, and there’s a mystery around how chemistry works between two (or a few) people and what makes one person attracted to another. It’s all very occult to me — hidden, intuitive, playful, but also vulnerable, scary and dangerous at the same time. Although we are animals, for humans, sex can be very cerebral.

The narrator is given the name Lilith by Frances and Matt, making reference to the story of creation. Satanism and Tarot are other guiding forces referred to by the novel’s characters. How interested were you in examining the various ways people interact with different belief systems?

The power dynamic between humans and religion is a theme I keep coming back to my in my work even when I’m not necessarily trying to. I love looking at how we interact with religion, even anti-religion, what it means to defy the conventional narrative. Cultural myths are so powerful in every region of the world and teach us about basics of human nature, almost as lessons. It’s why archetypes exist — on the whole, we learn from them, and sometimes without their lessons we are almost fated to repeat the mistakes in them. I think that’s part of what makes Satanism so interesting. LeVayan Satanism as it stands is more of a secular shout against traditional modes of religion, but ironically it still functions within a Christian paradigm, as a sort of antithesis to American flavours of Christianity. It functions partly as shock value, partly as serving the self, and partly as a small but mildly effective gateway out of Christianity for adherents who find themselves wanting out but unsure of how to get there.

The book carries a strong sense of loss and loneliness for Lilith, which becomes a key driving force in her behaviour. Do you think these are emotions that are underexplored in narratives about young people?

I’m not sure if it’s underexplored per se. Loneliness is a very common feeling, and it’s something that makes me really connect with a good book. A book with a lonely character is something I can really get into. I know that may not be everyone’s taste, but there’s something to be said for a really great, sad narrative.

The book is framed as a reflection on the past. Eight years on, the female narrator refers to feeling ‘erased’ from Matt and Frankie’s history, unacknowledged in the curated social media story of their life. How do you imagine life for Lilith after the story closes?

I’ve been asked before if I would ever return to these characters and I thought maybe I might in a different form. My best hope for Lilith is that she’s left her small town behind, traveled, seen the world, found someone who loves her, figured out what she wants to do with her life. I think Lilith’s most troubling issue was trying to find purpose, a reason to have better self-worth. The truth is that meaning is gleaned from within. Maybe she’s had a taste of that. And hopefully she’s had a lot more fulfilling sex on the way.

Are there any writers who have particularly inspired you? How have they influenced your work?

Very many. I would say I derive my biggest inspiration from indie writers like Elizabeth Ellen, Juliet Escoria, Richard Chiem; wordsmiths like Christine Schutt, Amy Hempel, Denis Cooper and Chelsea Hodson, and renderers of epic, lasting heartbreak, down to the scintillating details, like Tom Spanbauer and Mary Gaitskill.

How have you found the experience of writing your first novel? Do you have any other work forthcoming?

The first novel was completely messy, disorganised, harrowing and confusing, but ultimately very rewarding to actually complete a task I’d worked on for so long. I would stop and start, work when I felt like it at times, only a few times a week. And the opportunity to see it into the light is something I feel very privileged to have. Recently, I had a child, so my ways of writing have had to become way more efficient and organised, and honestly, I wish I’d started doing it this way sooner. I pretty much sit down to focus almost every day I possibly can. I feel it helps the work stay more clear in my mind.

Elle Nash is a founding editor of Witch Craft Magazine and a fiction editor at Hobart Pulp. Animals Eat Each Other (404 Ink) is her first novel. 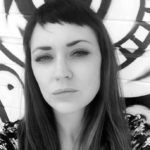 Elle Nash is a founding editor of Witch Craft Magazine, and a fiction editor at Hobart Pulp. Her work has been featured in publications including Cosmopolitan, Elle, Literary Hub, The Fanzine, The Offing and Enclave. Animals Eat Each Other is her debut novel.
Tags :
Q&A Lilith Satanism Sex

We are increasingly living in alternative relationship models but how do these compare to monogamy?

Reinventing the ménage à trois for the feminist age

Threesomes often revolve around the libido of 'one great man'. Can they work for women as well?

The ‘everything and nothing’ of sexual intercourse

Grace McCleen grew up in a fundamentalist religion and came late to sex. Here she reflects on its power.